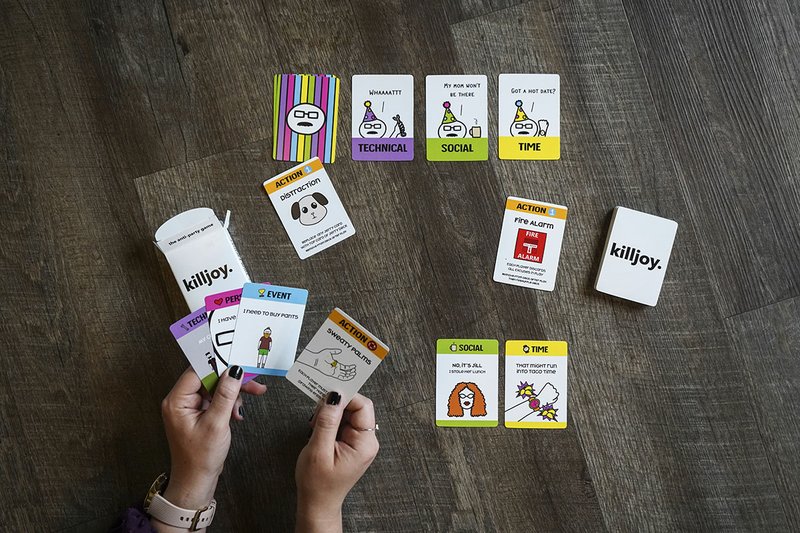 Game designer Kristie Kendall sorts through the card game she created, "Killjoy" at her home.-Photo by Cassidy Kendall of The Sentinel-Record

Tired of playing the same card games over and over again? Kirstie Kendall has brought to fruition a tabletop game, roughly three years in the making, titled Killjoy. It may be just the thing to have on deck in case you are locked inside again any time soon.

"What I did with Killjoy is I kind of came up with a game and then -- you really do this with any game honestly -- you come up with this idea, and then how you want to portray it," she said. "What is everyone's goal? When you figure that goal out, you decide how you want them to get there.

"So with Killjoy, you're trying to decide who is going to get out of this party first and how are they going to do it. Then that's when you start implementing mechanics. ... There are books out there that have generic game mechanics, and you just pick and choose the ones you like and fit them together. It's kind of like putting a puzzle together. Then once everything flows, you just keep on testing it until you have something that's fun."

Kendall's first game hit the tabletop in the fall of 2019; yet, growing up she never imagined her plan in life would turn from teaching biology to designing tabletop games.

While in college, Kendall met her husband and learned they shared an affinity for puzzles and mechanics. This shared interest allowed their relationship to blossom and eventually led to them becoming business owners.

"My husband and I -- we met at the physics department at Henderson while we were both at college," Kendall said. "He was making moving lamps and things like that, kinetic art pieces. He wanted to open a gallery. And I was like, 'That sounds like fun.' So we talked about it a little bit and at the time escape rooms were becoming a pretty big deal. They were just moving into this area of the country, so we decided to do that instead. He does all of the electronics. We both build and things like that. The escape room has kind of turned into more of his thing now. I still help manage and run it.

"We both really like to create story-driven games, and so I do the same things with tabletop games. We'll kind of pick a theme. I know when we did A Clinical Trial -- I kind of started designing that one first -- and it was more of a futuristic type game, and he said, 'Well, let's make it part of the history of Hot Springs.' So we switched it, and it's set in the '50s now. We included tidbits of information from the Army-Navy Hospital. There actually was a doctor named Dr. Wade and things like that. It's really fun to incorporate Hot Springs history when we can into the games. We pick a story or an idea and then we figure out what would be a fun way to escape this or fix a problem in there, and then you kind of work backward from there."

As Kendall mentioned that the escape rooms are more of her husband's main focus, the Camden native took to creating her own trade of tabletop games.

"The problem with escape rooms is they're a one-off thing," she explained. "People play them, but once you play it once, you really can't play it again because you know all the answers. So we wanted to make a game that our customers could take home with them and play over and over again. It went from, 'We were looking for an escape room type theme' and then we thought, 'Well, what do you escape?' You escape parties when you don't want to go to a party, and how you do that is you come up with excuses, so it became Killjoy, which is the game of excuses."

The couple has a blanket company, Light Entertainment, which owns A Narrow Escape, and Kendall independently publishes games under the same company. Self-publishing via Kickstarter, a crowdfunding platform, is why the development took longer than anticipated.

"Once I got the game designed and finished, I had to go out and market it to generate an audience so I could actually publish it," Kendall noted. "I did the art for it. I did everything for the game. It kind of just started out being a placeholder art, but I really liked the cartoony look of it so I thought I'd just keep it like that.

"It's pretty simple," she continued, detailing the gameplay. "Basically, you draw excuses and action type cards -- different types of actions -- and your goal is to get out of this guy named Jerry's bad party. So he's always throwing terrible parties, and you want to get out of it. He'll ask you different types of questions and you have to match those with appropriate excuses. He might ask you 'Do you have a social conflict?' and then if you have a social conflict card which is color-coded, you would play that, and the first person that answers three questions correctly gets out of the party."

Kendall hasn't stopped at just one card game as she prepares for the launch of her new social deduction game called Who's not wearing pants? with a few ideas on the back burner. The game will arrive in about a month.

"You're supposed to be a creative team at your work and you're trying to complete assignments," she said. "The way to do that is committing a certain amount of time to it, but if you're the player that's not wearing pants and nobody knows whether you are or not, you're trying to get out of doing work because you don't have any pants on, and everybody else is trying to figure out who doesn't have pants and who's making them fail these assignments, so it's very fast and very simple."

Kendall explained that it can be difficult to produce a living as a tabletop designer as "you're just kind of a drop in the sea of game designers."

So how does Kendall come up with these independent and unique ideas?

"Secret Hitler, Werewolf, Blood on the Clocktower, all of those -- I really like those mechanics and I like playing that game, but I'm not always super into the theme. ... The resistance and the spies, that's fun, but I'm usually watching comedy shows. I watch a lot of Adult Swim and stuff like that. So I was thinking, 'What is something that's funny? What's a funny situation that you would be in trying to get out of?' It usually just ends up being something weird like that. I love it, and it's a lot of fun."

As they continue to devise new projects, the couple supports one another in their creative endeavors as the two are sure to cook up plenty more entertainment for the public to enjoy.

"What we do is kind of a creative outlet for both of us," she said. "I don't think either of us 100% do anything just by ourselves. We bounce ideas off of each other all the time. We do kind of each manage our own projects. So if he's working on something specifically -- like right now, he's making a robot battle arena and it's gonna be kind of a battle bots thing. It takes five minutes and you can just play it and I'm working on the game that I'm about to come out with. Even though we have our own things, we both still kind of talk to each other. We're partners, and we're creative partners and we share everything."

The couple's business, A Narrow Escape, features five puzzle rooms: A Clinical Trial, The Bionic Dilemma, Wonderland, Murder at Silver City, and Pod -- which range from easy to hard and require at least two players.

To purchase Killjoy and/or reserve an escape room at A Narrow Escape, go to narrowescapear.com.