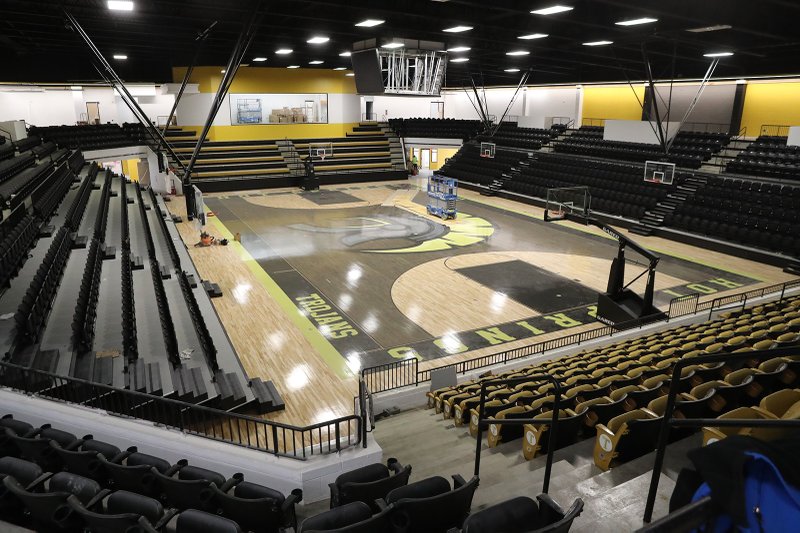 Hot Springs will have a new home for basketball, volleyball and more in August with the new Trojan Arena set to host its first season in the facility this fall.

Hot Springs athletic director Rodney Echols said that the new facility will be something the entire community can be proud of.

"It's going to shine a bright light on a wonderful space -- 2,200-seat arena that has been much-needed over several years," he said. "I can go back to when I was head basketball coach and remember how many games we had in the old gym where it was standing room only and very hot to where now we'll be able to house 2,200. [It is a] state-of-the-art facility, where you have a state-of-the-art weight room, state-of-the-art hospitality room and everything that's included within that space.

Echols said that while the main floor of the arena is mostly complete, there is still some work being done.

"It's almost there," he said. "They're still working below it. We still have some seating to be finished, but we're about 90% completed with that project. In light of everything that's going on right now, we can't wait to get into that space and be able to show off what we've done here in the last two and a half years with the Junior Academy."

The arena will showcase a four-sided video board above the gymnasium floor along with video-lit scorer's table, which will display the work of the high school's new audiovisual class.

"We'll be able to do instant replays," Echols expained. "We have an AV room attached to the arena. They can livestream games, run instant replays, and that video board is sponsored by State Farm -- Heather Powell and Clay Combs with State Farm. ... It is a well-lit technology space. So it will be a top of the line arena. It coincides with some of the other things that we're doing around the district as well."

In addition to the main gymnasium, the facility will boast a new concessions area, hospitality suite, classrooms and more.

"We even have classrooms embedded," Echols said. "Each basketball locker room has a film room attached to it. You have athletic training rooms. A kitchen is attached to it as well. Then you have the Trojan Store, the hospitality suite. We have all that in that one space."

Echols said that he anticipates great things from the opening of the new facility.

"With this arena, it's going to do wonders for our district and for the community," he said. "Kids are going to be able to take pride in having something that looks very, very nice. Our athletic programs will be able to utilize this facility and have something very nice to where they're able to call this home and walk in and [it will] feel [like] home, feel new, smell new. It's a state-of-the-art facility, and we're very eager to get in and very pleased with how it looks."