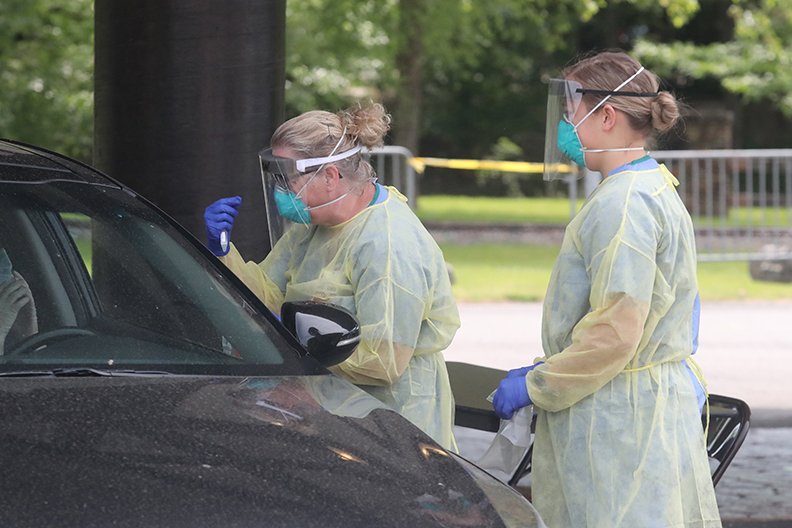 In a communitywide effort, around 80 people were tested for COVID-19 at last Monday's free drive-thru and walk-up testing hosted by UAMS that targeted "underserved populations" such as the homeless.

"We all came together and worked this out, and I just think it's great that all of Hot Springs can come together on this issue, because homelessness honestly is not just a problem for (the homeless), it's an issue for all of us," Carder said. "It affects our health care system, it affects the economic development in our city, it affects the service providers and certainly affects those people."

In addition to the event leaders, there were also 21 masked and gloved volunteers working the event from Homeless Grant programs, Cooperative Christian Ministries and Clinic, United Way of the Ouachitas, The Salvation Army, the Street Mission from Lakeview Assembly of God and St. Luke's Episcopal Church.

Carder said Jackson House donated lunches for the homeless, the Coca-Cola Bottling Co. donated Cokes and water, one neighborhood collected deodorant and teenagers collected dog food for the homeless, and Gefer Sims opened her event center nearby for volunteers to have their meals and breaks.

"This truly was a communitywide effort to serve those 'usually forgotten' in our city," Carder said in a Facebook post. "I know I may have missed some group or person but please know that your presence and effort has not gone unnoticed. We appreciate each and every effort put forth for this event."

In addition to the free COVID-19 testing, Carder said the Office of Emergency Management provided its shower trailer and 41 homeless people took advantage of a "good, hot" shower, and were given a "clean, fresh" set of clothes along with tents, mats, food and sanitary supplies to help fight COVID-19. Diamond Lakes Tile and Grout offered their services to clean and disinfect the showers after each use.

Above all else in the community effort, Carder posted she would "first and foremost" thank the UAMS Mobile Screening and Testing Lab for its incredible work.

"They were professional and wonderful people to work with," she said. "Mission accomplished."

Although the initial plan was to screen everyone who came before deciding whether or not to conduct a test, Carder said the UAMS doctor in charge decided to test each homeless person because they were such a "vulnerable" population.

She said the homeless are considered vulnerable to COVID-19 for many reasons.

"For one thing, they live in camps, so they live together, and there are a lot of different people in the camps; they live in close quarters. And the other thing that we were concerned about is they have very little access to health services and any kind of services and that made them vulnerable for this; they didn't get as much information as everybody else did, they didn't have the hand sanitizer, they weren't able to social distance like the rest of us, so that was a worry," she said.

"The other worry," Carder said, "is those folks travel a lot and they walk everywhere and they're in contact with people all around. So certainly the spread could have been really bad."

She did note that during the event she noticed none of the homeless people she saw had any viral symptoms.

Carder said the Arkansas Department of Health has a plan for any homeless person who tested positive for the virus and needed to be quarantined.