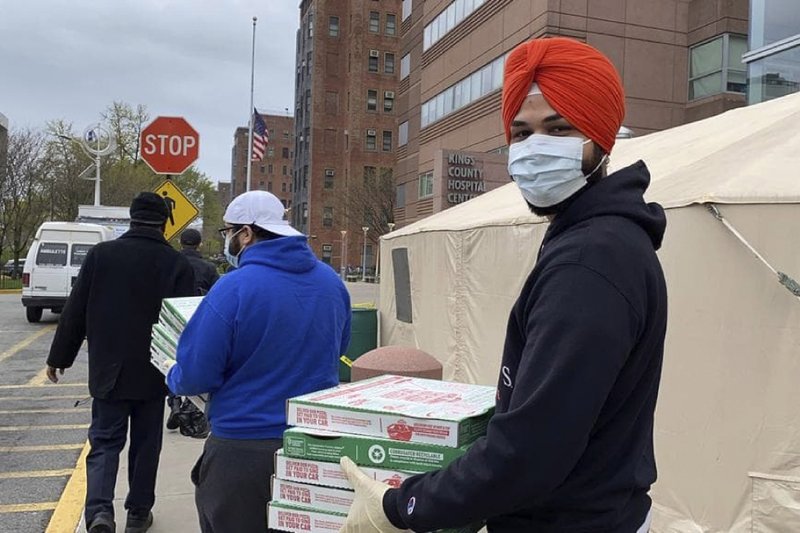 In this April 7, 2020, handout photo, Japneet Singh, right, delivers pizza to health care workers at Kings County Hospital in the Brooklyn borough of New York. Singh estimates 1,000 pizzas were delivered to essential workers since the end of March. (Courtesy of the New York Sikh Council via AP)

NEW YORK -- Before the pandemic, Shalinder Singh spent Sundays at his gurdwara, helping serve a community meal for 300 people or more at the Sikh place of worship in suburban Detroit.

Now, he's all about pizza.

Singh and his family have paid for and delivered hundreds of pies to hospitals, police stations and fire departments since the gurdwara suspended in-person services.

They wanted to carry on a tenet of their faith: helping others through langar, the communal meal shared by all who come.

"It just popped up in my mind, this is the time to take care of the heroes in the front," said Singh, the 40-year-old owner of a pet products company. "I spoke to a couple of doctors and they said pizza is the best because they're working 12 to 16 hours and they don't have time to sit and eat."

The Singhs, including 12-year-old Arjun and 14-year-old Baani, have delivered more than 1,000 pizzas since early April, with no plans to slow down. They drive as much as an hour to spread their pizza love once a week, as Singh continues to run his business, which is classified as essential.

"We're trying to go to areas that aren't getting much food," Singh said.

In New York, 25-year-old Japneet Singh, a fellow Sikh, also thought of pizza for under-resourced hospitals and overworked, minimum wage employees in the crosshairs of the virus.

After college graduation and some time in corporate life, he most recently worked as a field supervisor for the U.S. Census Bureau and drove an Uber on the side while searching for his passion.

Then the virus struck, shutting down his work. In the South Ozone Park neighborhood of Queens, Singh's heart went out to the desperate staff at Elmhurst Hospital Center and other hospitals overwhelmed by COVID-19.

"I figured you know what, I'm sitting home," he said. "Food always makes things better, so I asked one of my friends who works at Elmhurst Hospital, what can we do? He was like, pizza would be great. Ever since then, we haven't looked back."

Japneet Singh began delivering in late March; he too estimates he's distributed 1,000 pies or more. He makes two or three runs a week to hospitals throughout the city, and to the others in the struggle.

"There's other people on the front line, like grocery workers. We've been to a Walmart, police precincts, FDNY stations. We recently started feeding the homeless," he said.

Singh has enlisted a couple of friends willing to help deliver the food, but he's most in need of donations; he's paid for pizzas out of his own pocket, but it's not enough.

"We started putting out little clips on social media and that's how people have found us to donate," he said. Social media has been so great. I make a post and ask, `Where should we go next?'"

He's raised nearly $2,000. He's been working with the owner of two Papa John's pizzerias in Queens and Brooklyn who's been discounting pies and donating some as well.

Store workers have been especially grateful.

"These are minimum-wage workers," Singh said. "If we can put a smile on their faces with just a slice of pizza, why can't we do just one small act of kindness, you know?"

While nonstop global news about the effects of the coronavirus have become commonplace, so, too, are the stories about the kindness of strangers and individuals who have sacrificed for others. "One Good Thing" is an AP continuing series reflecting these acts of kindness.

Print Headline: Kindness comes one slice of pizza at a time