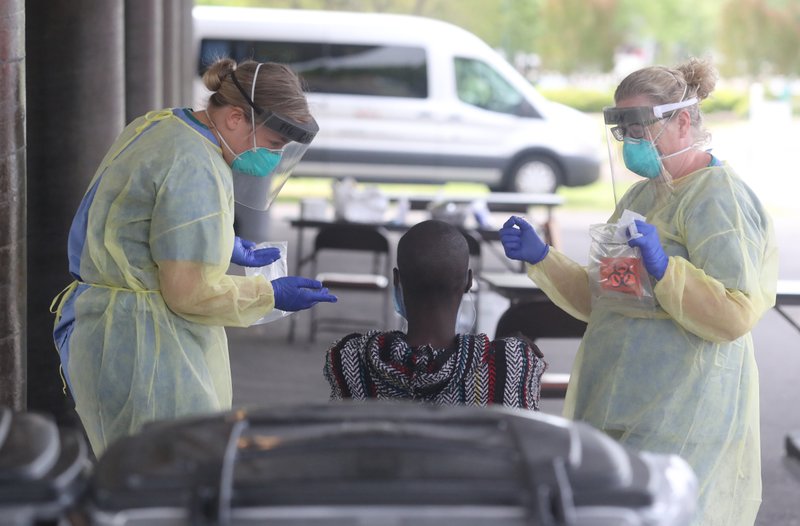 Army National Guard medic PFC Sydney Carr, left, and LPN Kim Paty of the University of Arkansas for Medical Sciences in Little Rock administer a COVID-19 test on an unidentified patient on Monday, May 11, at the Farmers & Artisans Market. UAMS had a mobile unit available for drive-through and foot-traffic screenings. - Photo by Richard Rasmussen of The Sentinel-Record

No positive cases were detected among the 66 people the University of Arkansas for Medical Sciences tested for the coronavirus May 11 in Hot Springs, a hospital spokesman said Monday.

The hospital set up its Mobile Screening and Testing Lab at the Hot Springs Farmers & Artisans Market for free drive-thru and walk-up screening and testing. Eighty-five people were screened and 66 tested, said Ben Boulden, a communications specialist for UAMS.

"Good news, there were no positive cases found in the testing done during the drive-thru," he said.

Garland County Department of Emergency Management Director Bo Robertson, who coordinated with the hospital to bring the mobile unit to Hot Springs, said Monday the goal was to test underserved people who haven't been able to access the five screening and testing centers providers opened across the county.

Those locations have helped the county be among the state leaders in per capita testing, with testing numbers exceeding 3% of the county's population of about 100,000.

DEM's shower trailer was also at the farmers market, joining a group of faith-based and secular nonprofits that provided volunteers and meals for the event.

Robertson said officials expected to screen or test about 150 people. The lower than expected turnout could indicate a low number of symptomatic people in underserved areas of the city, he said.

The results from Monday's event, coupled with the roughly 4% positivity rate on the more than 3,300 tests conducted on county residents, are promising signs as businesses begin to reopen, Robertson said.

"It makes you feel better about opening your doors," he said. "People still have to have common sense. There's still a whole lot of personal responsibility when it comes to protecting one's self, but low positivity tests are a good thing."

The Arkansas Department of Health has said health care facilities have the supplies and relationships with commercial labs to do more testing. The onus is now on the public to get tested.

"I know there are some who are reluctant to be tested for various reasons," Dr. Nate Smith, Health Department secretary, said Monday at the state's daily news conference on the coronavirus. "I want to encourage people to come out if they think they may be at risk or would like to know their status. We have testing at our local health units."