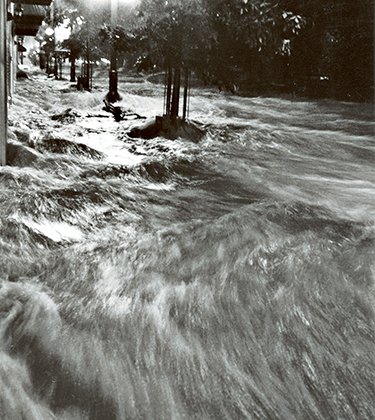 Thirty years ago today, Garland County was recovering from some of the worst flash flooding in its history.

Now, 30 years later, we face a crisis of a different type -- a pandemic that has not only sickened thousands and killed 102 Arkansans, but has challenged our economy.

That's why today, on a grim anniversary with an uncertain future ahead, it's all the more important to remember that it was due to the indomitable spirits of the residents and business leaders of the day that we not only persevered, but rebuilt our community into something great and enduring. And yes, we will endure this pandemic, as painful and lengthy as the recovery may be.

Rainfall in the spring of 1990 was generally above normal in western Arkansas, but Garland County and Hot Springs were hit the hardest on May 19 and 20. According to the U.S. Geological Survey's report on the flood released two years after the flood, the recording station in Hot Springs National Park logged 12.97 inches of rain within a 24-hour period from May 19-20, 1990. At Hot Springs Memorial Field, the recording station logged 11.52 inches of rain from 7 p.m. May 19 to 7 a.m. May 20. The National Weather Service forecasts had predicted only 2 inches of rain in that time. At the peak of the flood, the report estimates that Remmel Dam, which forms Lake Catherine, was overtopped by 2.66 feet.

Hot Springs Public Works Director Denny McPhate told us in March 2016 that the city received 12.95 inches of rain in 24 hours in May 1990, at one point reaching an inch an hour for right at 10 hours during that period.

The American Red Cross estimated that 335 homes in Garland County were flooded, and 160 homes were destroyed, along with the Carpenter Dam Road bridge over Lake Catherine, late the night of May 19 and early the morning of May 20.

Floodwaters 2 to 4 feet deep rushed through the downtown historic district. Visitors and business owners reported that cars were transported downstream by the swift current, and smashed into other vehicles and buildings, the report notes.

The flash flooding caused an estimated $2.9 million in damages to private property and $2.4 million to public property.

Hot Springs police, with the help of the city's street department, used front-end loaders to rescue stranded people, while the Hot Springs Fire Department used its trucks to rescue victims who were in serious danger of drowning.

Nonprofit organizations, law enforcement, the Arkansas National Guard, local governments and the public quickly jumped in to help. Downtown merchants were amazed at the people who came into their businesses and offered to help clean up.

A "comeback" rally was held downtown to show the world, which saw the devastation on television, that the flood wouldn't keep Hot Springs down. Community leaders who were around during that time might recall the difference that single rally made, not only as far as community spirit, but to the perception the rest of the state and the region had about Hot Springs.

While it may be too soon to suggest a similar event now, while so many people are still suffering both physically and financially, it is, nevertheless, an idea that will have merit at some point in the -- hopefully near -- future.

I want you all to take heart in the fact that the flood of 1990 did not keep our community down, but helped it grow even stronger. We may become disheartened when events like the flood, the Majestic Hotel fire, the closure of the Army and Navy General Hospital and this pandemic occur, but I can assure you that we will persevere. We may be forever changed, but we will persevere.

And that is also why, on the anniversary of one of the worst floods in Hot Springs history, it would be an absolute shame if our spirits waver not because of an unseen virus, but due to our own melancholy hearts and fear. Let us show the world that we will not be brought down by our own defeatist attitudes, but will rise above the flood.