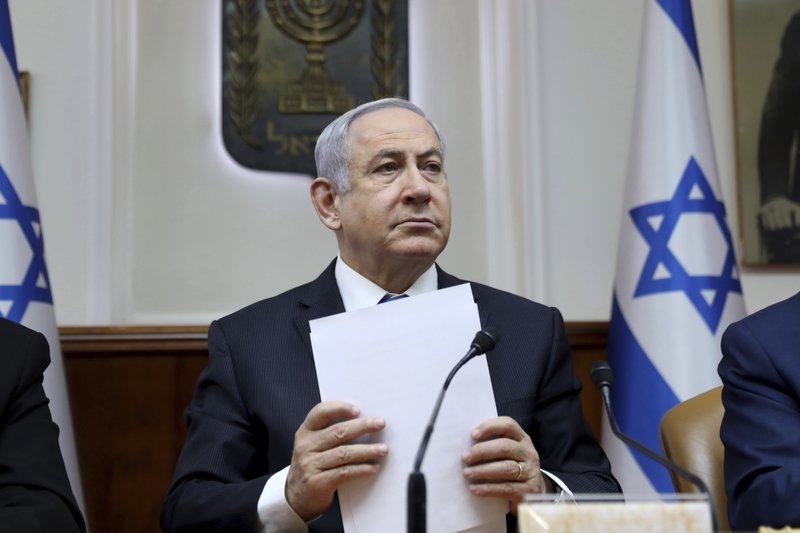 JERUSALEM -- An Israeli court Wednesday ordered Prime Minister Benjamin Netanyahu to appear for the opening of his criminal trial in Jerusalem, setting the stage for a dramatic scene on Sunday.

Netanyahu will enter the Jerusalem District Court surrounded by a phalanx of security as he becomes the first sitting Israeli prime minister to go on trial.

His attorneys had asked the court for an exemption from appearing at the arraignment. They argued that his presence was "not essential" because their client had "read this indictment several times already," and that his bodyguards' presence would violate Health Ministry social distancing requirements.

In its decision, the court rejected the request, saying that Netanyahu "must, like all other accused, appear and give his statement before the court."

After a three-year investigation, Netanyahu was indicted in November on charges of fraud, breach of trust, and accepting bribes.

He is accused of accepting lavish gifts from wealthy friends and offering to grant favors to powerful media moguls in exchange for favorable coverage of him and his family. Netanyahu has denied wrongdoing and claimed to be the victim of a conspiracy by overaggressive police and prosecutors and a hostile media.

Netanyahu's trial was supposed to begin last month, but was delayed when his justice minister closed most of the court system due to the coronavirus pandemic.

Israel's longest-serving prime minister, Netanyahu swore in a new government this week after the country's third national election in under a year.

All three elections ended inconclusively, with neither Netanyahu, nor his rival Benny Gantz, in control of a required parliamentary majority.

But with the coronavirus crisis raging, and wanting to avoid another election, Gantz dropped his opposition to sitting in a government with the indicted Netanyahu. Under their power-sharing deal, Netanyahu and Gantz will rotate the prime minister's job during the next three years -- with Netanyahu holding the post for the first 18 months.

Remaining on the job was key for Netanyahu. From his position as prime minister, he is not legally required to resign while under indictment, and he is expected to continue his verbal attacks on the media, justice system and political opponents.

The power-sharing deal, however, has also weakened Netanyahu. Under the agreement with Gantz, the two men control an equal number of government ministries and parliamentary committees and essentially hold veto power over most key decisions.

But the deal also created a new position of "alternate prime minister," which like the premier is not required to resign under indictment. This position would allow Netanyahu to remain in office throughout a trial and potential appeals process that could stretch on for several years.