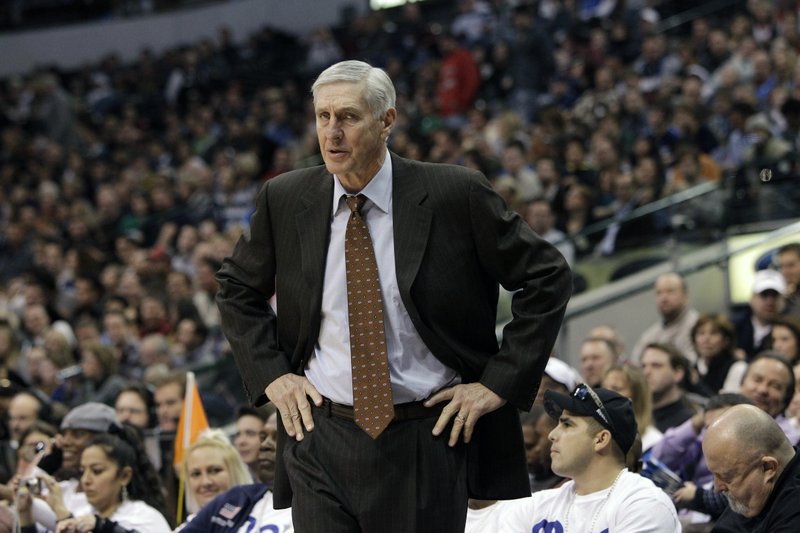 Utah Jazz head coach Jerry Sloan is shown during a Dec. 11, 2010, NBA game against the Dallas Mavericks in Dallas. The Utah Jazz have announced that Sloan, the coach who took them to the NBA Finals in 1997 and 1998 on his way to a spot in the Basketball Hall of Fame, has died. Sloan died Friday morning, the Jazz said, from complications related to Parkinson's disease and Lewy body dementia. He was 78. - Photo by Tony Gutierrez of The Associated Press

Jerry Sloan was undoubtedly one of the greatest coaches in NBA history.

Yet there's one glaring omission on an otherwise stellar resume.

Sloan, who died Friday at age 78, isn't the only coaching guru lacking a trip to a title. Let's take a look at the 10 best coaches and managers who failed to win a title in America's biggest sports:

10. GEORGE KARL: The sixth-most wins in NBA history, but he struggled mightily in the postseason. Karl's teams lost in the opening round a staggering 14 times over 27 seasons. His best shot at a championship came in 1996, when he guided the Seattle SuperSonics to his lone NBA Finals. In an unfortunate bit of timing, Karl had to face one of the greatest teams ever, the 72-win Chicago Bulls led by Michael Jordan.

9. BILLY REAY: Fortunate enough to take over a Chicago Blackhawks team that featured four future Hall of Famers (Bobby Hull, Stan Mikita, Glenn Hall and Pierre Pilote), Reay reached the Stanley Cup Finals in 1964, only to lose to Montreal in seven games. That was a precursor of two more heartbreaking losses to the Canadiens, most notably a Game 7 setback in 1971 when the Blackhawks squandered a 2-0 lead midway through the second period at Chicago Stadium.

8. MARTY SCHOTTENHEIMER: One of just seven coaches with 200 regular-season wins, his career was marred by a jarring string of postseason flops. As coach of the Cleveland Browns, he lost back-to-back heartbreakers to the Denver Broncos in the AFC championship game -- one to "The Drive," the other on "The Fumble." With the Kansas City Chiefs, he lost again in the AFC championship and fell at home two others times as the conference's No. 1 seed. Criticized for his conservative style, Schottenheimer's playoff record (5-13) stands in striking contrast to his regular-season mark (200-126-1).

7. PAT QUINN: As a second-year coach in 1980, he guided Philadelphia to the NHL's best record and the Stanley Cup Finals. But the Flyers were upset by the New York Islanders, losing on Bobby Nystrom's series-ending overtime goal. The Islanders went on to claim four straight titles, while Quinn only made it back to the finals one more time over his 20 years as a coach. In 1994 with the Vancouver Canucks, he lost to another New York team in seven games as the Rangers ended their 54-year championship drought.

6. DON NELSON: Nelson won more games than any coach in NBA history -- during the regular season, that is. Despite a staggering 1,335 victories over 31 years, and an innovative style known as "Nellie Ball," he never even reached the NBA Finals. His best shot came in 2002-03 with a 60-win Dallas team featuring Dirk Nowitzki and Steve Nash that lost to eventual champion San Antonio in the conference final. It should be noted that Nelson participated in plenty of celebrations as a player, winning five titles with the Boston Celtics.

5. AL LOPEZ: He never had a losing record in 15 full seasons as a big league manager, winning an average of 92 games. During the 1950s, Lopez has the distinction of capturing the only two AL pennants that weren't hoarded by the mighty New York Yankees. But his Cleveland Indians were swept in the 1954 World Series by Willie Mays and the New York Giants after winning a record 111 games. In 1959, Lopez's "Go-Go" Chicago White Sox fell to the Los Angeles Dodgers. He was runner-up in the AL a whopping 10 times during his Hall of Fame career -- all but one of them looking up at the Yankees.

4. MARV LEVY: No other coach has reached the Super Bowl four years in a row. Unfortunately for Levy, he didn't win any of them, tarnishing an unprecedented run with the Buffalo Bills that began with a bitter 20-19 loss to the New York Giants in the 1991 title game. After Scott Norwood's potential winning field goal went wide right, Levy and the Bills never came so close to a championship. They lost the next three Super Bowls by an average of three touchdowns. Too bad for Levy we can't count his two titles coaching in the Canadian Football League.

3. JERRY SLOAN: Sloan racked up the fourth-most wins by an NBA coach (1,221) during a 26-year career spent mostly with Utah. Sloan took over the Jazz in 1988 and guided a consistent powerhouse led by Karl Malone and John Stockton. Sloan had only one losing season over his 23 years in Salt Lake City. Unfortunately, though, his best teams came along at the same time as that Jordan guy. Utah lost to the Bulls in back-to-back NBA Finals in 1997 and '98.

2. DUSTY BAKER: He got a glimpse of what was to come as a rookie manager. In 1993, Baker's San Francisco Giants went 103-59 but missed the playoffs by a single game after a memorable division race with the Atlanta Braves (there were no wild cards in those days). Over 22 years, Baker has guided four teams to the playoffs and notched 1,863 wins. But his career is marred by its postseason failures. A seven-game loss to the Giants in the 2002 World Series. The Chicago Cubs' Bartman loss to the Marlins in 2003. A pair of wrenching home playoff defeats as manager of the Washington Nationals. But Baker still has a chance to get off this list. At age 70, he's been hired by the Houston Astros in the wake of their sign-stealing scandal.

1. BUD GRANT: The first coach to reach four Super Bowls. Also the first to lose four Super Bowls. Grant built a powerhouse team over 18 seasons with the Minnesota Vikings, reaching the playoffs 12 times. But Grant's squads always flopped badly on the biggest stage, losing each of their four title games by double-digit margins, capped by an embarrassing 32-14 rout to the Oakland Raiders in the 11th Super Bowl, Grant was far more successful in the Canadian Football League, where he won four Grey Cup titles in 10 seasons with Winnipeg.

Print Headline: Sloan, other coaching greats who were denied a title