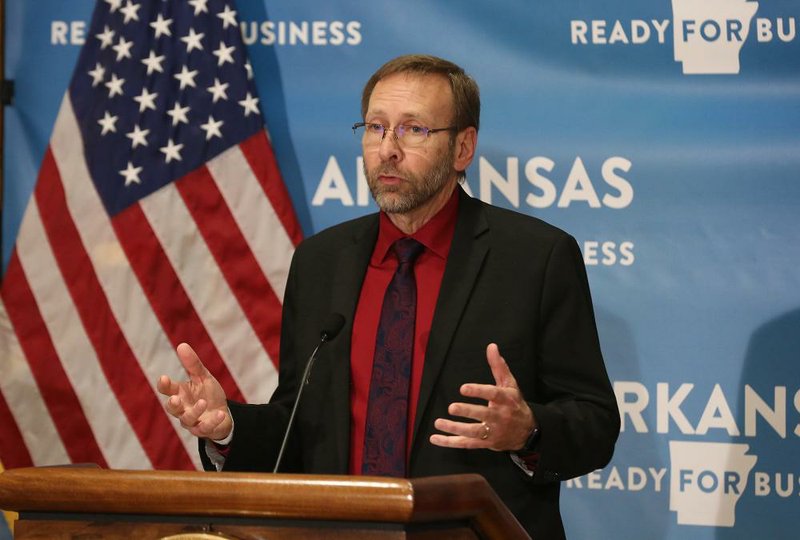 Dr. Nate Smith, Secretary of Health, answers a question during the daily covid-19 briefing on Thursday, May 21, 2020, at the state Capitol in Little Rock. (Arkansas Democrat-Gazette/Thomas Metthe) - Photo by Thomas Metthe

The state expects to test 4% of its population for COVID-19 next month and build out its contact tracing capacity, officials told the steering committee making recommendations on how to spend the state's federal coronavirus relief funds.

The committee gave a do-pass recommendation during its May 20 virtual meeting to a $58 million appropriation from the $1.25 billion the state received from the $2 trillion Coronavirus Aid, Relief and Economic Security Act. Expanded testing received $30.5 million and contact tracing $22 million. The appropriation is subject to legislative approval and will be reviewed by the committee in September.

According to the budget submitted to the committee, the money would purchase a PerkinElmer high throughput testing machine for the Arkansas Department of Health's public laboratory, allowing it to increase its in-house testing, and reimburse private facilities for use of their Panther System high throughput machines.

Dr. Nate Smith, Health Department secretary, told the committee the public and private platforms would facilitate 120,000 tests a week with a high degree of accuracy and speed. The state set a goal to conduct tests equal to 2%, or 60,000 people, of its population in May. It had done about 50,000 through the first three weeks of the month.

The $30.5 million included test kits and equipment to support the machines.

"Those are harder to control in terms of the conditions, and that's where there's been problems with false negatives. With these lab-based machines, high throughput instruments are very accurate. The challenge of course is you have to collect specimens, ship it to the lab. If we have these high-throughput machines we can have a rapid turnaround, get those results back in less than 24 hours."

The $22 million would hire 350 contact tracers and support staff critical to locating sources of infection. Smith said Thursday during the state's daily COVID-19 briefing that the roughly 200 contact tracers are identifying where 80% of new cases are originating, but those workers have been pulled from Health Department teams that would normally track outbreaks of other diseases.

The Health Department's budget proposal included $29.6 million to administer a vaccine for the coronavirus, but the funding wasn't approved because of uncertainty over when a reliable vaccine will be ready. The committee said the CARES Act money has to be spent by Dec. 30 or returned to the federal government. It was reluctant to encumber money for a program that may not be ready by the spending deadline.

Smith said if a vaccine were ready by the fall it could be administered with the Health Department's influenza vaccination program.

"No one knows when we will have vaccine available to us," he said. "I've been on some calls where if everything goes well there could be a vaccine pushed out at least on a semi-investigational basis to states for high priority populations as early as this fall.

The $58 million appropriation included $3.4 million for the University of Arkansas for Medical Sciences to develop an antibody test and study revealing the extent of the virus' spread and people with protective antibodies. The hospital told the committee it has developed a test based on one from Mount Sinai Health System in New York that received emergency use authorization from the Food and Drug Administration.

UAMS' proposal said the early data indicated the Mount Sinai test is 98.5% accurate. The appropriation requests included $300,000 for a robotic system that can test 3,000 samples per week. The hospital would collect samples statewide once its test has been approved.

"We will use our technology to use knowledge about phone numbers to predict where people within the state live," Dr. Cam Patterson, UAMS chancellor, told the committee. "We will identify people across the state that we will send our staff to them anywhere in the state to collect samples or they can go to a local community center and have their sample collected. Those samples are brought back to our Little Rock campus where the assays will be run."