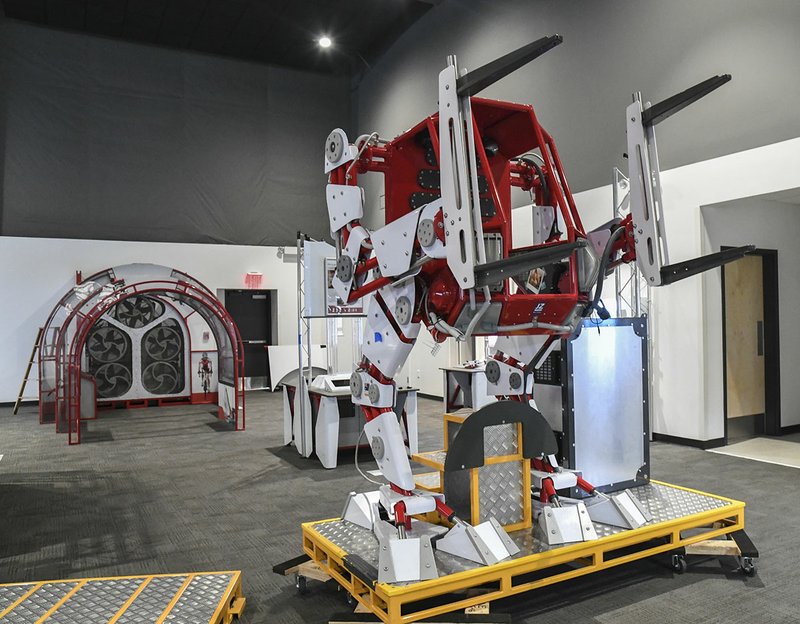 "Bionic Me," which opens today at Mid-America Science Museum, features segments on mind control, robotic limbs, and night vision and highlights inventions that enhance the human experience. - Photo by Grace Brown of The Sentinel-Record

"Bionic Me," the inaugural exhibit in Mid-America Science Museum's recently completed traveling exhibit hall, opens to the public today, the first to be hosted in the expansion that city voters authorized in September 2018.

"From climbing into an exoskeleton to see what you can do with enhanced strength to flying a virtual jet pack, this exhibition is packed with full-body experiences," Diane LaFollette, the museum's executive director, said in a news release.

"There's also a great mix of interactive and problem-solving experiences focusing on technology that helps us to overcome our natural limits."

LaFollette told The Sentinel-Record that the museum started looking at "Bionic Me" in 2018. Museum officials looked at "vendors across the world" before picking five exhibits that could potentially be the new hall. LaFollette said they ultimately chose "Bionic Me" because "it was different."

"We've been talking about" the traveling exhibit hall "since I got here in 2013," LaFollette said, adding that several museum board members had already been discussing such an expansion prior to her being hired.

The new 8,750-square-foot traveling exhibit hall was constructed using the proceeds from a bond issue city voters authorized in September 2018. A resolution approved by the Hot Springs Board of Directors in September 2019 awarded Integrity Construction of Arkansas a $1,578,000 contract to build the exhibition hall. A groundbreaking was held on Oct. 7, 2019.

After finally seeing the hall completed, LaFollette said the addition was "better than I had imagined."

"Honestly it's surreal, it's so beautiful," she said.

"Bionic Me," which comes from Perth, Australia, was created by Scitech, a not-for-profit organization focused on science, technology, engineering and mathematics education in western Australia and produced by Imagine Exhibitions, a company that designs traveling exhibitions. 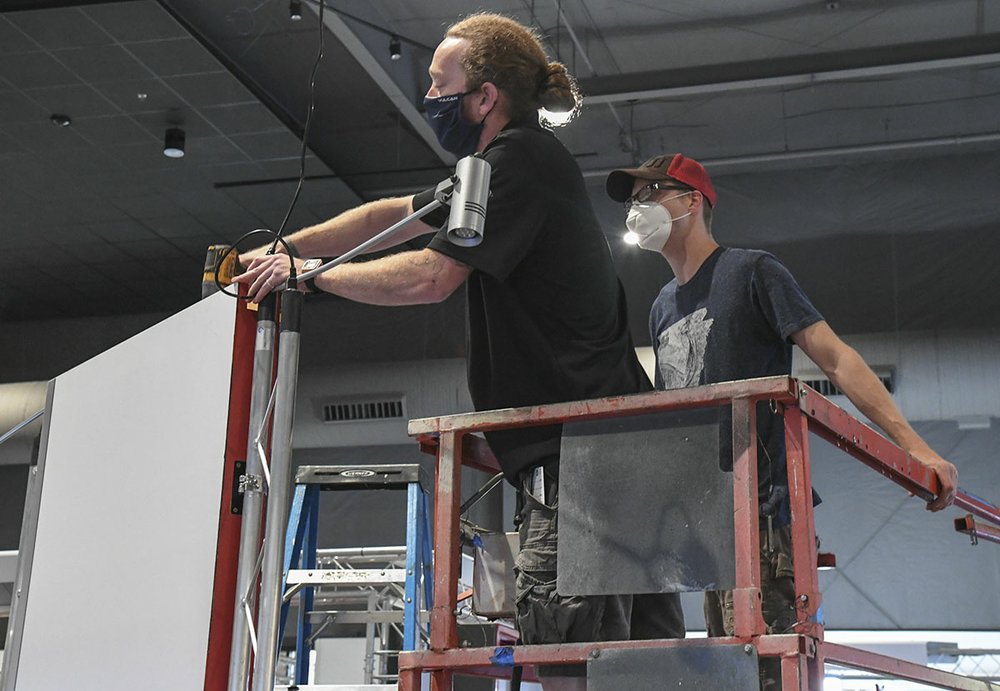 Exhibit technician Ben Wilkins, left, and Director of Exhibits Dylan Kuchel work on a section of "Bionic Me" Wednesday at Mid-America Science Museum. The exhibit opens today. - Photo by Grace Brown of The Sentinel-Record

It explores the inventive and ingenious medical and industrial breakthroughs that have helped enhance the human experience and contains both hands-on and full-body experiences, the release said.

Dylan Kuchel, director of exhibits, said "Bionic Me" is about any aspect of the human body that can be modified. Interactive components allow guests to attempt to control a computer using the power of their minds, race against a Paralympian and see how a bionic eye works.

"Everything from glasses to contacts to prosthetic legs," Kuchel said. "We have one (exhibit) where you can move a ball up and down just by freeing your mind up, completely going blank. It detects alpha and beta waves and gamma waves. The more you can clam your mind, the more it keeps the ball in the air.

"Just different things like that. Modifications of the human body that extend what we are already capable of."

"It's fun for all ages," LaFollette said. She added that she "can't think of one thing" in the exhibit wouldn't appeal to both children and adults. For example, in one section visitors can race a simulation of a person with a prosthetic leg. She said that she thinks that is something both kids and adults will enjoy.

The museum and exhibit hall will be open from 9 a.m. to 5 p.m. All guests older than 10 are required to wear a mask inside the museum and the museum staff asks patrons to maintain a distance of 6 feet for social distancing.

LaFollette said that several new protocols are in place due to COVID-19. There will be staff members stationed in each exhibit throughout the museum who will sanitize exhibit pieces as guest use them.

She also said that several exhibits have either been removed or changed, including those that incorporate sand or rubber, and the big blocks from the arena area, which now has a solar system exhibit. LaFollette also said that they will limit the number of people who can enter the building to 30%.

"There's so much for the whole family to experience, enjoy, learn and be surprised by," LaFollette said in the release. "It's such a unique exhibition and one that the whole family will love."