'Patrol packs' of food help those in need 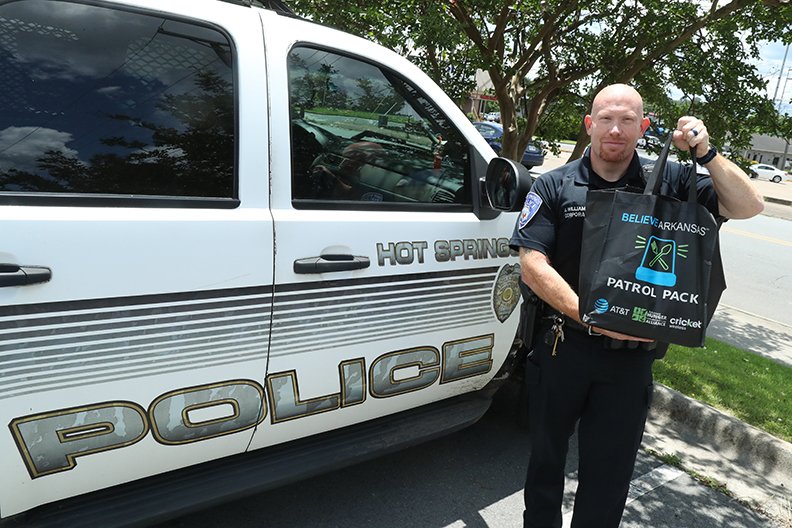 Hot Springs Police Cpl. Joey Williams, the department's public information officer, displays one of the 108 "patrol packs" every officer in the department received Wednesday to carry in their units. The packs contain a variety of nonperishable foods that can be given out to those in need the officer comes across in the city. - Photo by Richard Rasmussen of The Sentinel-Record

Hot Springs police were equipped with a new weapon to combat hunger in the city Wednesday, as each officer was supplied with a "patrol pack" of food to be given out to those in need that they meet while on the job.

AT&T partnered with the Arkansas Hunger Relief Alliance and its food bank in Little Rock to provide the packs, consisting of a nylon bag filled with nonperishable food items, which officers will carry in their units, Cpl. Joey Williams, the department's public information officer, said.

"AT&T contacted the Arkansas Food Bank and the food bank contacted us last week and said 'Hey, do you want to team up?'," Williams said. "They felt like we would be a good team member for this project and we said, 'absolutely.' Then they showed up today with a box truck and a palett full of these packs."

Williams said they provided 108 packs, enough for every officer, including those in the patrol, traffic and criminal investigation divisions, with the packs containing a variety of rice, pasta, canned goods, macaroni and cheese, peanut butter, Hamburger Helper and other items.

"Basically everything I ate when I was single," Williams said, laughing.

"We're slowly getting them distributed to everyone as they come in for their shifts," he said. "And there's the possibility of getting more down the road once we've handed all these out. This is just the inception, basically, to get it going."

Williams said the officers can give out the packs at their own discretion. "There were no directives or guidelines, just who the officer thinks they need to help. They can give them out as they see fit."

The packs are emblazoned on the side with logos for the sponsors, including AT&T, the Arkansas Hunger Relief Alliance and Cricket Wireless.

"It's a good idea and a really good program," Williams said, "Especially at this time when you have a lot of people in need and out of work. Plus it helps us build good community relations.

"People need to understand we're not here to just arrest people and write tickets. We're a part of the community here and we want to help everybody."

Print Headline: 'Patrol packs' of food help those in need