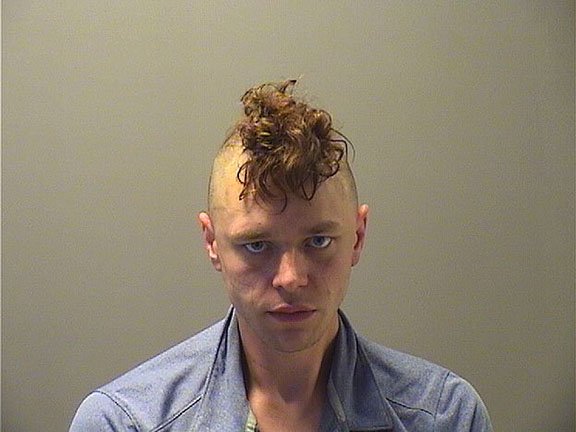 A homeless man was arrested on felony and misdemeanor charges Wednesday after allegedly fleeing from Hot Springs police and then attacking one officer after he used his Taser to try to stop him.

Seth Kane Hughes, 30, was taken into custody around 9 a.m. and charged with a felony count of second-degree battery, punishable by up to six years in prison, and misdemeanor counts of fleeing on foot and having fictitious tags.

Hughes, who also had a warrant for failure to comply, remained in custody Thursday in lieu of $5,500 bond and is set to appear today in Garland County District Court.

According to the probable cause affidavit, shortly before 8 a.m., officers responded to the Kings Inn Motel, 2101 Central Ave., regarding people sleeping in a vehicle with Texas tags parked behind the motel. Officer 1st Class Shawn Woodall found a man in the driver's seat and a woman in the front passenger seat, both sleeping.

As he approached, the two woke up and officers identified themselves and explained why they were there. Woodall was talking to the man, later identified as Hughes, and noted he kept looking around and could sense he planned to run.

He told Hughes to sit down, but he suddenly ran toward Waffle House, 2017 Central, with Woodall chasing him. The officer caught up to him and a physical altercation began as Woodall tried to take him into custody. Hughes got away again and fled toward Laser Street.

Woodall continued chasing him and yelled for him to stop and then deployed his Taser, striking Hughes and causing him to fall to the ground. Hughes was able to pull the probes out and began resisting again, Woodall states.

The officer "drive stunned" him with the Taser multiple times trying to get him into custody. Hughes allegedly began pushing, shoving and hitting Woodall with his arms trying to get away.

Hughes was able to break away a third time and began running back toward the Waffle House, but Woodall caught up to him again and tackled him to the ground and held him there until other officers arrived and took him into custody.

The affidavit notes Woodall was transported by LifeNet to CHI St. Vincent Hot Springs where he was treated for road rash and two large bumps on the back of his head reportedly sustained during the two altercations with Hughes. He was treated and released and returned to duty later that morning.

When questioned by detective Mark Fallis, Hughes reportedly admitted to running from Woodall and fighting with him. He stated he knew he had the warrant for his arrest and his intention was "to get away and not go to jail."