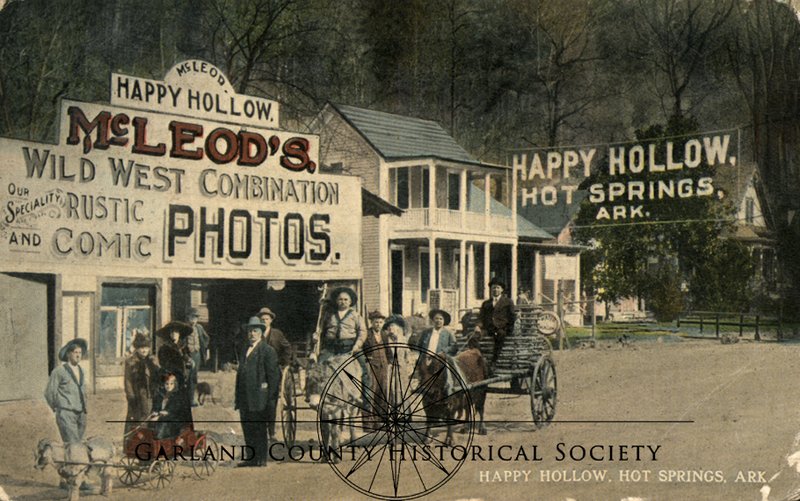 When summer arrives, people in Hot Springs are lucky enough to have an amusement park to head to — Magic Springs Theme & Water Park. Hot Springs, however, was blessed with a delightful amusement park long before Magic Springs opened. And it was all because of Norman McLeod. McLeod opened a photography studio at Happy Hollow (which later became Fountain Street) in 1888. He added attractions until McLeod’s Happy Hollow Amusement Park lined the street.

What did McLeod have at Happy Hollow? He had donkeys, ponies, and horses that you could rent for a ride up Hot Springs Mountain. He had a shooting gallery made up of bottles placed on many shelves against the mountain. He had bears, monkeys, bobcats, and a zebra or two. He had curios and souvenirs. He had, for a while, Frank James (retired from the outlaw life) signing autographs. He had Nick Burley’s medicine show with Tuckanuby, an American Indian. When Tuckanuby wasn’t there, there was always someone in Native American dress, although his ethnicity might not stand up to close scrutiny.

Most of all, McLeod had his camera. He would photograph you in a bathtub, in a Western costume while you sat on a donkey or an ox or a stuffed buffalo, as you stuck your head out of a hole cut out of a life-sized cartoon prop, or in front of a hillbilly cabin or a hillbilly saloon. The hillbilly theme was the most popular. State historian Tom Dillard said that McLeod is, in fact, “. . . as much to blame as any person for Arkansas’ long association with the backwoods and the hillbilly stereotype. Throughout the 1890s and well into the twentieth century, McLeod made thousands of pictures of well-off tourists posed in the most incongruous hillbilly scenes imaginable. These pictures then traveled across the United States and around the world.”

Sporting a handlebar mustache and a Western hat, McLeod presided happily over his park. He charged no admission fee and welcomed everyone. He even provided a mule-drawn trolley to carry visitors from Central Avenue up Fountain Street. The street had a higher grade then, and the mule would be unhitched and walk behind the trolley as it coasted down Fountain Street on the return trip. One time, the tired mule jumped into the back of the trolley and rode down to Central. A smart mule, he continued to take the easy way down the hill and thus became an attraction himself.

Everyone came to Happy Hollow — hometown folks and conventioneers, millionaires like Jay Gould and kids who had to save for that 25 cents to ride the donkey, do-gooders and teetotalers (Billy Sunday and Carrie Nation) as well as the not-so-good (Al Capone and Owney Madden).

An aging McLeod sold the park to David Anselberg in 1908 and died in 1915. The amusement park closed in 1948 at the time of Anselberg’s death. McLeod, however, is certainly not forgotten. His thousands of photographs, marked “McLeod’s Happy Hollow, Hot Springs, Arkansas,” have preserved priceless images of residents and visitors enjoying Hot Springs’ first amusement park.