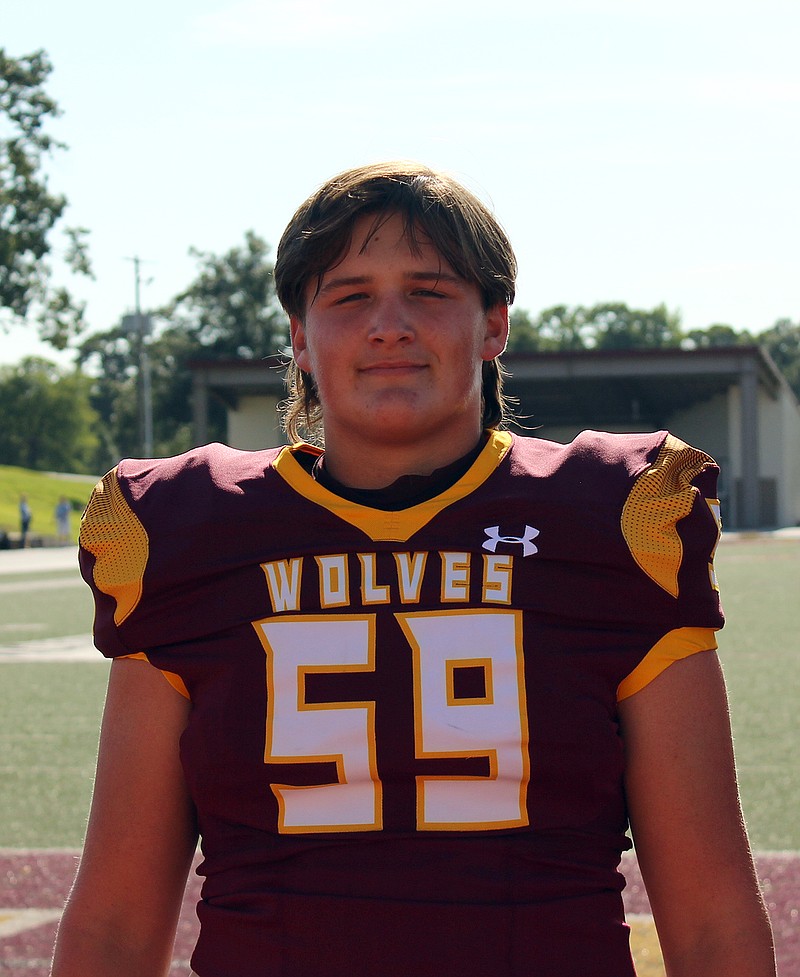 Lake Hamilton junior Dylan Horton earned the Week 8 NFL Way to Play High School Award for his work on the Wolves offensive line this season. - Photo by James Leigh of The Sentinel-Record

The NFL Way to Play High School Award is presented to one high school football player each week of the season for demonstrating exceptional in-game playing technique. Horton was the Week 8 recipient of the award, which is in partnership with Hudl, a sports analysis software company that also hosts videos of athletes during games.

Horton said he was pleasantly surprised to find out that footage of his blocking highlights came to the attention of the NFL.

For Dylan's achievement, the Wolves football program will receive a $1,500 equipment grant through USA Football.

"The Way to Play Award is about excellence in football through using proper technique that protects players from unnecessary risk," said Troy Vincent, NFL Executive Vice President of Football Operations, in a news release. "This award incentivizes strong fundamental playing technique, demonstrates best practices, and at the same time, benefits all levels of the game."

Horton said regarding the importance of technique and proper fundamentals that it is what ultimately leads to success.

"I think that kind of stuff is what gets touchdowns and wins ballgames," he said. "It's just doing your job and doing it well, and they get touchdowns. And you don't really receive a lot of credit for it until this kind of stuff happens. But I think there's people on ... the O-line on our team does that a lot, and I just happened to get (credit). People just happened to find mine. But I think it's one of the most important things to do, is just work, do your job, and it gets you touchdowns."

Horton said that when looking to make a block, the goal is simple.

"I'm just trying to move that dude and create holes to get my runners through... for whoever's running the ball, to get through," he said.

Lake Hamilton head coach Tommy Gilleran said Horton's achievement is not only a good thing him but also for the football program and the entire school district.

"It's awesome," he said. "You know, any time one of our kids can get recognized from the press or from something like this, it's always a neat thing for Lake Hamilton Schools first of all, and then for our program. And so it's pretty cool and exciting for this school but also for our football program. Coach (David) Davenport does our offensive line, and he teaches that.

"You know, on our backside, we usually (teach) scoop, which means we get underneath the guy and we get to the next level. And blocking the guy in front of you gets you, you know, a first down, where blocking somebody downfield gets you six points. So we kind of tell them that technique: if you get to the next level and get that second block, we can score touchdowns on it. ... You know, when the running back breaks through that second line where we make touchdowns. And so, we'd rather get a touchdown. So you either get six yards on the first block, or it's six points on the second block. And so we always tell our kids to get down there, so we can free it up and get touchdowns. We're proud of Dylan and hopefully this kind of stuff will carry over to the playoffs."

Gilleran said the team is not sure yet how the team will use the $1,500 equipment grant.