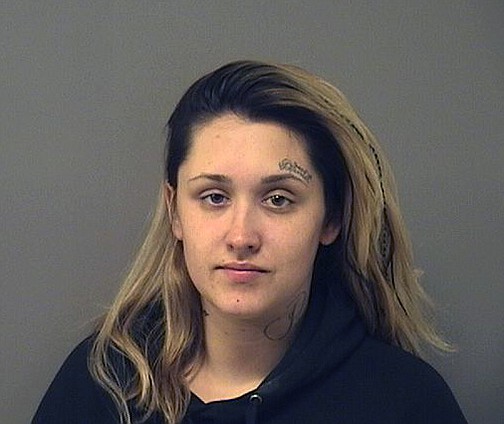 A Hot Springs woman has been charged with second-degree murder for Tuesday's fatal shooting of a local man on Ouachita Avenue, which was captured by a security camera at a nearby motel, according to the affidavit released Thursday.

Leslie Rita Jane Sinclair, 25, who lists a Bellview Street address, was taken into custody shortly before 10:30 p.m. Wednesday on Interstate 55 in Mississippi County and brought back to Hot Springs. She is charged with second-degree murder, a felony punishable by up to 30 years in prison, for the death of Shane Roy Sowers, 43, of Hot Springs.

According to the affidavit, Hot Springs police responded to a report of a shooting shortly after 5 p.m. Tuesday in the 600 block of Ouachita Avenue, near the Garland County Sheriff's Office. Officers arrived to find a male victim, later identified as Sowers, lying on the sidewalk with what appeared to be a gunshot wound to his back.

He was transported by LifeNet to an area hospital where he later died from his injuries.

Police Detective Hunter Scott responded to the scene and viewed video surveillance from the Holiday Motel, 642 Ouachita, which reportedly showed a white female, later identified as Sinclair, pull an unknown caliber handgun from her purse and follow behind Sowers as he was leaving the motel property.

Sowers continued walking east on the sidewalk and was approaching the driveway of the Best Court Motel, 638 Ouachita, next door to the Holiday, when Sinclair allegedly fired a single shot, striking Sowers in the back.

Sowers fell to the ground and Sinclair ran back to her vehicle, a blue Chevrolet Malibu, that was parked at the Holiday Motel. She then sped away and was last seen headed west on Ouachita.

The affidavit notes that Detective Joey Vanderburg identified the woman in the video as Sinclair on sight from previous "law enforcement interactions." A warrant was issued for her arrest Wednesday.

The affidavit did not indicate if Sinclair made a statement to police after her arrest or a possible motive for the shooting.

Sinclair remained in custody Thursday on $250,000 bond and is set to appear today in Garland County District Court.

According to court records, Sinclair has no prior convictions, but was arrested Oct. 12, 2020, on a misdemeanor count of theft of property under $1,000 involving CVS Pharmacy. She pleaded not guilty to the charge on Nov. 3 and is set for trial in district court on Dec. 10. A court order barring her from contact with CVS was also issued.