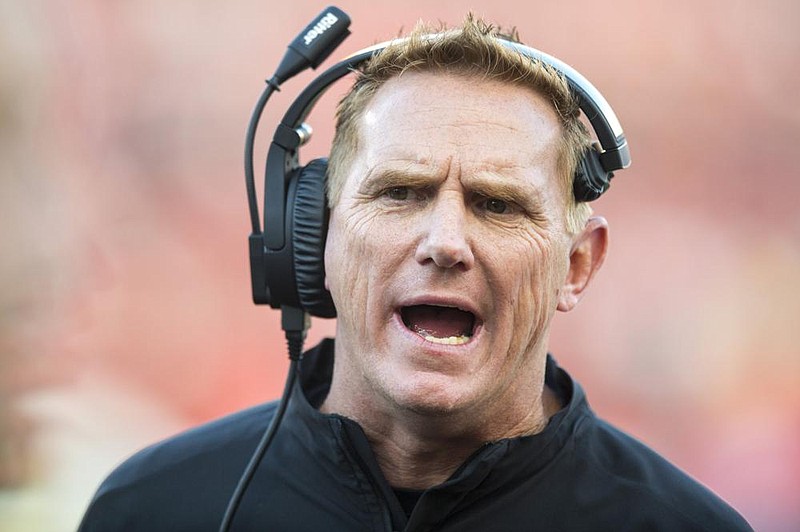 ASU Coach Blake Anderson said not having a game last week helped his team get healthier. “A lot of guys that were beat up and banged up, I think they used those [off] days really well,” Anderson said. (Democrat-Gazette file photo)

The Red Wolves have come up on the wrong end of the scoreboard the last three times they've stepped on the field, which cost them a shot at winning a Sun Belt Conference championship. But ASU (3-5, 1-4 Sun Belt) is far from done.

According to ASU coach Blake Anderson, neither is Texas State (1-9, 1-5), which will host the Red Wolves today at 11 a.m. Central in San Marcos, Texas. The Bobcats have lost their past seven games and don't appear to be on the bowl radar despite the NCAA's recent decision that every FBS team will be eligible to participate in the postseason.

Anderson doesn't think any of that will matter once the teams square off inside Bobcat Stadium.

"To me, it'd be really easy for (Texas State) not to be playing hard," he said. "But you see just the opposite out of them. They're playing extremely hard, and that tells you they're dangerous.

"They love what they're doing, and they like playing for the coaching staff that they're playing for. I just expect that we're going to get their very best."

Anderson hopes the Red Wolves can do the same after having another game affected by covid-19 last week. ASU got an unexpected Saturday off when Louisiana-Monroe had to reschedule its game with the Red Wolves due to a virus outbreak in its athletic department.

Anderson said not having a game did his team some good, especially with a four-game stretch to close the regular season while trying to reach a bowl game for the 10th consecutive season.

"We've played some physical ball several weeks in a row," he said. "A lot of guys that were beat up and banged up, I think they used those (off) days really well. We looked much better when we came back on Sunday, so I think we benefited from it.

"I don't know that we'll ever get our team completely back to where it was until we really get a true offseason. But the extra few days definitely helped guys feel better. At this point in the season, any little ounce of freshening up or healing up helps you."

Of Texas State's nine losses, four have come by seven points or fewer, including last week's 40-38 road defeat to Georgia Southern. All five of the Bobcats' offensive touchdowns were from at least 24 yards. Their other touchdown came on a 97-yard kickoff return from Jeremiah Haydel.

Texas State is averaging 27.1 points and more than 360 yards offensively. The Bobcats, like the Red Wolves, have played two quarterbacks at times this season, with Brady McBride leading the way. The sophomore has completed 57.6% (114 of 198) of his passes for 1,125 yards and 9 touchdowns. Junior Tyler Vitt has has completed 59.6% (62 of 104) of his throws for 819 yards and 8 scores, but he dislocated his left wrist against Georgia Southern and will likely be sidelined for the rest of the season.

The Bobcats also have eight players who've caught at least 10 passes, and five who've run for 155 yards or more.

The biggest issue for Texas State has been defense. The team is giving up 471.3 yards and 36.4 points. The Bobcats have allowed nearly 38 points during its seven-game slide.

"We're just not finding a way to get the ball to bounce our way, or just finding a breakthrough to actually close out a game and win," Texas State coach Jake Spavital said earlier this week during the Sun Belt's weekly coaches teleconference. "That's where the frustrating part is with our team, but they understand it because we have a transparency of why we win and lose games.

"I tell them I'm proud of them because they fight, and I think they're a pretty resilient team. It's just that I think we've got to clean up our own mistakes and start looking at ourselves in the mirror."

Anderson sees a team that's capable of doing damage against just about anyone.

"They've got a lot better team than their record indicates," he said. "I think a lot of people are in that boat this year because you just don't really know exactly all the dynamics of what teams have gone through. I looked at them this past week, and they came close to beating a very good Georgia Southern team.

"They're still playing hard in spite of it all. Coach Spavital does a really good job with the offense and getting the ball to the guys that he needs to. So we've got to do the little things right. We can't turn it over, and we have got to capitalize on our opportunities. We talk about energy and execution, but we've also got to come out strong and finish strong."