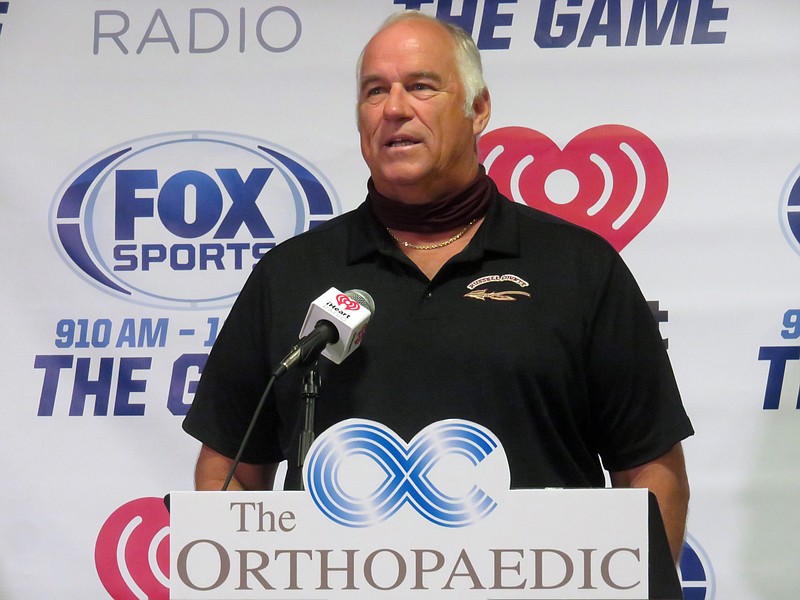 Russell County head football coach Mark Rose speaks during High School Football Media Days in Opelika, Ala., on July 22. Football is Mark Rose's life. He was an undersized lineman on Auburn's Southeastern Conference championship teams of the late 1980s under Pat Dye. He's been a high school coach for three decades. But there was no way Rose was sending his players onto the field in the middle of a pandemic. - Photo by Jordan D. Hill/Opelika-Auburn News via The Associated Press

For Mark Rose, football is more than a living.

But it's not worth dying for.

Rose has become a lonely but powerful voice: a longtime high school coach -- one of the more successful in football-mad Alabama -- who finds it ludicrous to be carrying on with prep sports in the midst of a devastating pandemic.

He felt so strongly about it that he quit his coaching job at Russell County High, a school in the rural, eastern part of Alabama, not far from the Georgia line.

"I put it all on the line, but I would do it all again," Rose said Friday when reached on his cell phone. "I couldn't sleep at night if I wasn't protecting my players, their families and my coaches."

Rose is outraged that some 30,000 high school kids in Alabama -- not to mention hundreds of thousands around the country -- have continued to play football without the rigid testing protocols that colleges and the NFL were able to put in place.

"We have zero testing policy in the whole state. None," Rose said "We were just guinea pigs out there."

Russell County forfeited or called off its first five games because of COVID-19 issues. When it became apparent the Warriors would be cleared to take the field in Week 6, Rose gave up his job and its $29,000 annual stipend, though he remains at the school as the athletic director.

The 54-year-old called it an "excruciating" decision given how much football has meant to him.

In the late 1980s, Rose was an undersized offensive lineman who started on Pat Dye's last championship team at Auburn. He still remembers one especially brutal practice, but with a sense of gratitude in his voice, believing those challenges helped mold him into the man he is.

Over the last three decades, he's built an enviable reputation leading the next generation of players. Rose has been the head coach at four schools, proudly noting that he's never been fired from a job. A career record of 175-82 made him the 24th winningest active coach in the state coming into this season, according to the Alabama High School Football Historical Society.

But Rose's dedication to the game goes far beyond wins and losses.

"I've missed two practices since I was 7 years old," he said. That was in 2010, when he was coaching at Smiths Station High. "My mother was dying. I drove to Huntsville to be with her after practicing on a Monday night. She died that night, so I spent two days burying her. Then I drove back and coached the game on Friday night."

With his coaching career on hold, Rose has taken on an even higher calling. He considers it his spiritual duty to call out the decision by his state (and so many others) to carry on with Friday night lights as if everything was normal.

"The Lord is telling me to say this," Rose related. "He showed me real quick that this was not something to be messed with."

Unfortunately, too many others have taken a different tack, downplaying the threat of COVID-19 or, even worse, calling it nothing more than a hoax.

That's one reason this country finds itself in such dire straits, with more than a quarter-million deaths and some 12 million infected by the coronavirus. Even while there is reason for hope thanks to some amazing strides toward a potential vaccine, it will be months before there is widespread access. In the meantime, new cases have surged to staggering levels from coast to coast.

Rose couldn't bear the thought of sending out his team to play in those sort of conditions, not when high schools lack the resources to do the sort of widespread testing that is needed to have any chance of competing safely.

Even with those precautions, coronavirus outbreaks have played havoc with the college and NFL seasons.

Rose quickly realized the gravity of the threat during summer workouts when an outbreak within the Russell County locker room sent a 33-year-old assistant to the hospital for almost two weeks. Several of Rose's coaching friends have also contracted the virus, not to mention a handful of parents.

While no one in his world has died, Rose figures there are surely deaths that can be traced back to high school football, given the sports oversized influence in so many cities, towns and communities.

"Anybody who tells you nobody is dying has got their head in the sand," Rose said, his voice rising in anger. "They don't want to know the truth."

He is not calling for a total shutdown of life as we know it. He actually believes football and other sports can be played with an acceptable degree of safety if medical guidance is followed.

Rose also understands how much the game means to his players, many of whom come from low-income households. For them, football is a real conduit to getting a college degree. That's why he offered to set up 7-on-7 camps as a substitute for the games, with plans to record each workout and send off the film to any interested colleges.

Rose insists that many high school coaches feel the same way he does, but are reluctant to speak out for fear of losing their job and the much-needed extra income.

He also points out the reckless irresponsibility of relying on coaches to essentially police their own programs.

"You can't put coaches in charge," Rose said. "They have to win. Their livelihoods depend on it. With no policies and no oversight, don't think for a minute there aren't folks out there who are telling their players not to get tested or not to go to the nurse."

More than anything, he worries that high school football has spread the virus far beyond the playing field.

"I have no fear personally, but I feel a responsibility to those players and their families," Rose said. "I've got many kids who live with parents and grandparents. These people are scared."

He's not ready to give up coaching. He's confident that he'll be back on the sideline next season, either at Russell County or somewhere else. By then, hopefully, most folks will have access to a vaccine.

No matter how this all turns out, Rose has no regrets.

"I don't think I'm done with coaching," he said. "But it has revealed a side that I never thought I would see -- and don't ever want to see again."

Paul Newberry is a sports columnist for The Associated Press. Write to him at [email protected] or at https://twitter.com/pnewberry196 His work can be found at https://apnews.com/search/paulnewberry