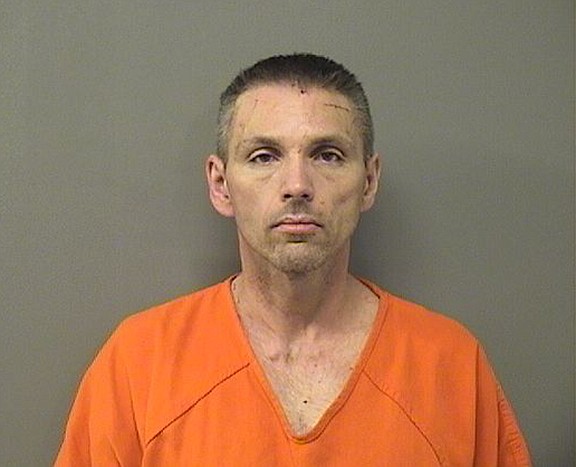 A local felon was arrested Thursday night on multiple charges after allegedly refusing to come out when Hot Springs police attempted to execute a narcotics search warrant at his house and then fleeing in a vehicle, almost hitting six officers.

A search of the house after the warrant was finally executed reportedly uncovered a large quantity of suspected drugs, numerous guns and over 3,400 rounds of ammunition of various types.

According to the probable cause affidavit, shortly before 5 p.m., the HSPD SWAT team, special investigations unit and DEA agents attempted to execute a narcotics warrant on Jensen's Hermlee Street residence.

SWAT team members began giving commands via loudspeaker for Jensen to exit the house with his hands up and warned him force would be used if he didn't come out. The officers got no response from Jensen and began deploying CS gas into the residence to force Jensen out.

At that point, officers noticed smoke coming out of the chimney, which was not visible earlier, indicating Jensen had set something on fire inside.

At 5:50 p.m., Jensen reportedly backed out of his garage in his vehicle while the door was still closed, causing damage to the house and vehicle. He backed up the road and sped away south on Elice Circle. He went past the intersection of Hermlee and Elice where six SWAT team members were staging and almost hit them, forcing them to "take evasive action" to avoid being hit.

Jensen continued on Elice Circle until he reached the point where the street dead-ends, where he reportedly wrecked. He fled on foot into the woods with officers and DEA agents in pursuit and was apprehended moments later by officers.

After Jensen's arrest, the detectives and DEA agents were able to enter the house and begin searching and in the office area allegedly located five loaded guns, including two 9-mm pistols, a .45-caliber handgun, a .22-caliber long rifle and a .22-caliber revolver, along with numerous magazines and boxes of ammunition with a total of over 3,400 rounds.

They also found digital scales, a money counter, a vacuum sealer with bags, multiple thumb drives, several cellphones, various laptop computers, tablets and other such equipment in the office area. In the attic, they found another loaded rifle and in the fireplace they found several burned firearms.

In the bathroom, they reportedly found meth near the toilet and some meth "shards" in the toilet. They also found signs of meth around the floor of the fireplace where "Jensen attempted to burn the bags." The substance was field tested and confirmed to be meth, the affidavit states.

Jensen was last convicted in Garland County Circuit Court on Sept. 11, 2012, of possession of a firearm by certain persons and possession of a controlled substance, meth, and sentenced to 15 years in prison but was later paroled.