Hogs looking to re-Boot against LSU 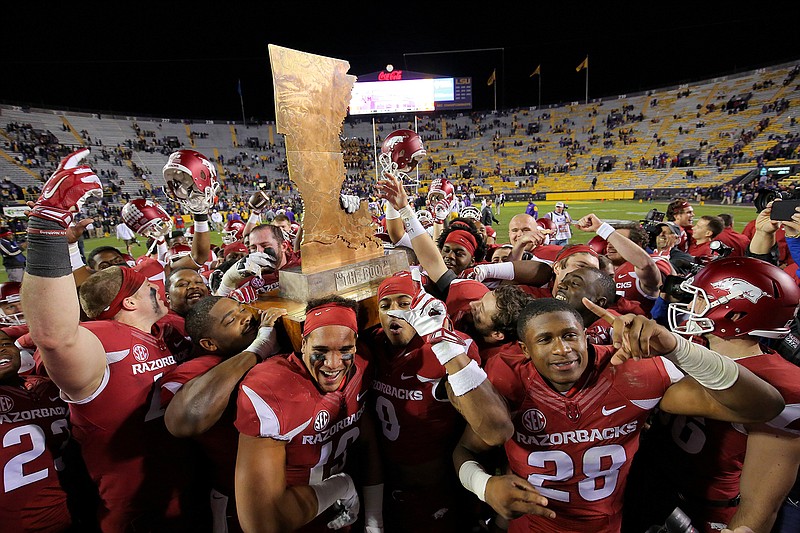 Arkansas Razorbacks players celebrate with the Golden Boot after defeating LSU on Nov. 14, 2015, in Baton Rouge, La. The Razorbacks hope to regain the trophy today as the Tigers come to Reynolds Razorback Stadium. - Photo by Stephen B. Thornton of Arkansas Democrat-Gazette

FAYETTEVILLE -- None of the current Arkansas Razorback players has been a part of winning the Golden Boot Trophy. Only a small handful of them have even seen it up close, unless they were visiting the LSU athletic complex over the last four years.

The elusive 175-pound trophy is within reach today for the University of Arkansas (3-4), which opened as a 2.5-point favorite over defending Southeastern Conference and College Football Playoff champion LSU (2-3).

COVID-19 related issues have reduced the number of available players for the Razorbacks, causing a swing in the betting line to make the Tigers the slight favorite for today's 11 a.m. game at Reynolds Razorback Stadium. In fact, the Razorbacks had to see satisfactory results on Friday morning from their latest coronavirus testing to confirm the game was a go.

Coach Sam Pittman signaled the game was on when he posted a picture of Razorback Stadium this morning with the text: "We need everyone we can get in here tomorrow! #GoHogs."

Fifth-year seniors like Jonathan Marshall, Grant Morgan and Tyson Morris have seen the Golden Boot up close, but that's about it for the Razorbacks, who last claimed it with a 31-14 win on Nov. 14, 2015 in Baton Rouge, La.

"That's a lot of motivation," Marshall said. "We haven't had that thing since I came in my redshirt freshman year. I really want to get it back and go across there and grab it. That will be a memory that won't be forgotten."

Tailback Trelon Smith, a junior transfer from Arizona State and a big part of the revived Arkansas running game, knows what's at stake. Even if he's never seen it.

"I know it's a trophy," Smith said. "The boot trophy. I got big plans of bringing that home this weekend."

Pittman was on two winning Razorback staffs in the battle for the Golden Boot in 2014 and '15, so he's seen what a win over LSU means to Arkansas faithful.

"The Boot, the LSU game is a big deal for Arkansas," Pittman said. "We have approached it that way. Obviously all games are important. This has a little extra juice to it, obviously and we'd love to have the Boot stay here."

Propelled by speech from Golden Boot trophy creator David Bazzel, the former Arkansas linebacker, the 2014 Razorbacks sprinted across the field on a cold, wet night to bring the trophy back to their sideline after a 17-0 win over the No. 17 Tigers. That snapped a 17-game SEC losing streak for the Razorbacks.

"I remember it was a big deal," Pittman said. "The guys went over there and grabbed the trophy and all that kind of stuff, and I certainly was glad to be a part of that. But it's 2020 now and we'll have to figure out how to try to get the win this year."

The Tigers are off to a rough start. However, a two-week period of recovery has the Tigers feeling refreshed heading into Northwest Arkansas.

The two-week lull was brought about by an open date and then a postponement of their Nov. 14 game against Alabama due to coronavirus issues in the LSU program. The Tigers had a players-only meeting early this week, led by receiver Terrace Marshall.

"These past two weeks have been great for us being off," linebacker Jabril Cox said. "It's helped the development in the younger guys and getting more reps, something they wouldn't see if we were ... playing each weekend."

LSU coach Ed Orgeron is trying to keep the wheels on the bus after the ragged start.

"We have a lot of football left," Orgeron said. "We have a young football team. Many of these guys were not starters on the championship team, so this is a brand new team.

"I told them we're building a championship team. Just like after we lost to Troy, we had to get together, get back to the fundamentals and the basics and acquire some grit and some toughness. That's what we're doing right now."

Orgeron, who spent two years at Arkansas as an assistant strength coach under Ken Hatfield and calls Northwest Arkansas "a beautiful place," gave a nod to Pittman's work in immediately restoring respectability to the Razorbacks.

"What a tremendous job they've done to turn this Arkansas team around," Orgeron said. "Outstanding coaching job and I compliment their players the way they play. They are playing very hard. They have a good football team.

"Arkansas is going to be ready to play. This is a game they look forward to. LSU-Arkansas, that's a big game."

However, it wasn't big enough for the Tigers to want to keep it on the Thanksgiving weekend slot on their schedule. Once Texas A&M joined in the league in 2012, LSU officials were on board with making their annual battle with the Aggies their year-end special.

"Even though I was responsible for building [the Golden Boot], the trophy thing is not a big deal to me," Bazzel said. "It's nice to win a trophy game, but the win is bigger than the trophy.

"I think it's more irritating to lose to LSU four times in a row without even worrying about the trophy. The trophy just sort of exacerbates it a little bit because you get to see the other team walk off with it."

Bazzel thinks for this year's game the trophy can be a great tool for Pittman and Orgeron.

"We're not playing for a conference championship, we're really playing for pride at this point," Bazzel said as a talking point for the coaches. "And we have a trophy. LSU can sit there and say we've had this thing for four years, or if you're Arkansas you're sick of seeing them win every year. So it does add a little extra to me. "

The Razorbacks have notched some of the biggest, most impactful wins in school history against LSU the last 28 years, starting with the two Miracles on Markham in 2002 and 2008 on late, long touchdown passes into the same end zone at War Memorial Stadium in Little Rock.

A poll of the Arkansas Democrat-Gazette sports staff in 2017 after the program's first 25 years in the SEC, ranked the Razorbacks' 50-48 triple-overtime win at No. 1 LSU in 2007 as the fourth-most memorable game in their league history. It was certainly one of the most dramatic, with star tailback Darren McFadden proclaiming "I got that wood right here!" while brandishing a small bat during Coach Houston Nutt's post-game interview on CBS.

Then there was the 2010 game, perhaps the most important win of the Razorbacks' SEC run because it clinched the program's only BCS bowl berth under Coach Bobby Petrino.

That 31-23 win for the No. 12 Razorbacks over No. 6 LSU ranked as the 10th most memorable game in the Arkansas Democrat-Gazette poll.

It is most remembered for quarterback Ryan Mallett's two touchdown strikes of 80-plus yards to Cobi Hamilton, including an 80-yard score on the final play of the first half.

Two LSU defenders collided near midfield just after Hamilton's reception, but it's doubtful Hamilton would have scored without receiver Jarius Wright screening Patrick Peterson for about 20 yards.

Wright, the Arkansas record holder with 2,934 receiving yards, recalled the atmosphere in Little Rock for that 2010 game.

Said Hamilton in 2017, "That was probably the happiest Little Rock, Arkansas, has ever been. Like leaving that stadium, I just feel like the whole state was happy."

Wright, a native of Warren was part of two Golden Boot wins in Little Rock.

"It was one of the most important games for me ... just being able to play for your home state against a team like LSU, which was always usually a top-notch program," Wright said. "The opportunity to beat those guys and play for the Boot, I can't say enough great things about this rivalry."