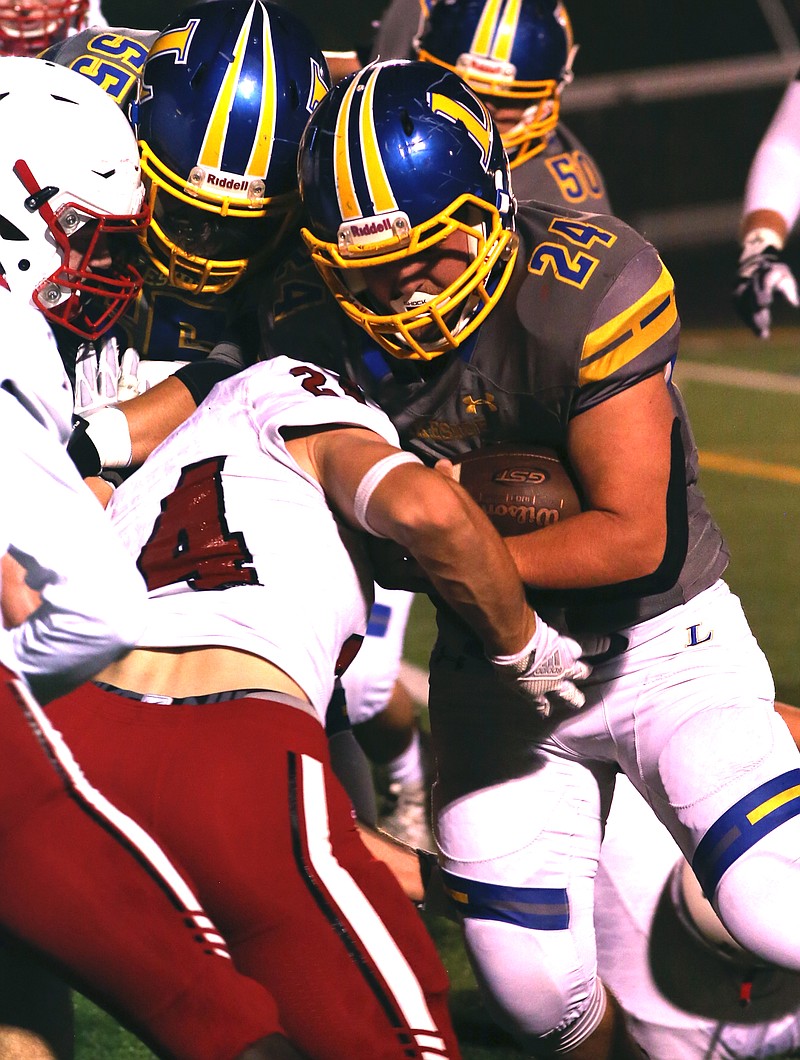 Lakeside senior Will Perrigo (24) drives the ball near the end zone in Friday's game against Vilonia at Chick Austin Field. The Rams defeated the Eagles, 31-22. - Photo by Corbet Deary of The Sentinel-Record

Vilonia struggled to find a rhythm as Lakeside's defense broke up some key passes to move onto the quarterfinals in the Class 5A football playoffs with a 31-22 victory over the Eagles at Chick Austin Field Friday night.

With the Eagles trailing 17-9 at the break, Vilonia (5-3) opened the second half with a 22-yard pass from sophomore quarterback Wesley McKissack to junior Kannon Bartlett before a false start call moved them back five yards. The visitors recovered as a pair of offsides penalties against Lakeside (6-3) placed the ball at the Rams 23 with junior Seth Kirk making it in for the score with 2:08 off the clock to pull within 17-15 after a failed 2-point conversion.

A 26-yard pass from Lakeside senior quarterback Will Ross to junior Chase Cross broadened the Rams' lead as junior kicker Andrew Degrasse's point-after attempt was good for a 24-15 lead. The visitors' next possession blended into the final quarter as junior Jamison Hinsley reeled in a pass from McKissack with 2:00 off the clock. Senior kicker Noah Newman's PAT brought the Eagles within two points of the Rams.

With 32.6 seconds remaining in the game, senior Will Perrigo hauled the ball in from the 6, capping an 18-play, 80-yard drive as Degrasse's kick set the final.

The visiting Eagles found their way onto the scoreboard early with a field goal by Newman but Lakeside answered back as Ross connected with Cross and junior Brock Duncan to move Lakeside close to the end zone. With 4:02 left in the first quarter, Perrigo rushed in from the 1-yard line for the Rams' first score of the night with Degrasse's kick giving them a 7-3 lead.

Personal fouls against the Eagles aided the hosts moving into the second quarter, but the Rams struggled to get back over the hump, opting to kick a field goal as Degrasse widened the spread to 10-3 with 8:56 to go until the break.

Lakeside senior Ty Davis recovered a Vilonia fumble at the 6-yard line, opening up the opportunity for Ross to find classmate Logan White in the end zone for a 4-yard pass, and Degrasse's kick made it 17-3 with 1:15 on the clock.

The Eagles finally picked things up on the ground as McKissack spotted classmate Jack Vines on a 41-yard passing touchdown with 21.3 seconds, but the PAT was no good for a 17-9 deficit at intermission.

The Rams will face Little Rock Christian next Friday night at 7 p.m.