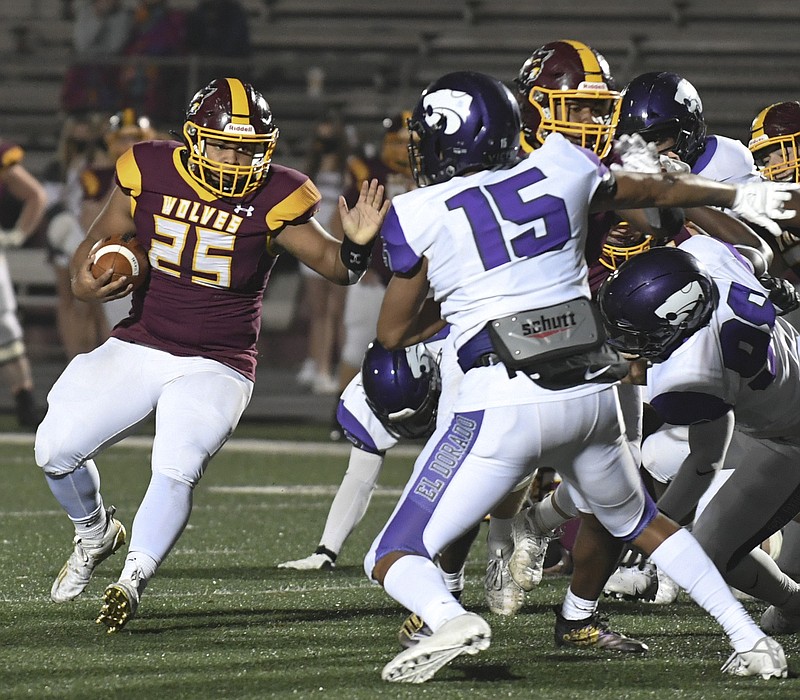 Lake Hamilton junior Tevin Woodley (25) turns upfield for positive yardage as El Dorado's Jyrin Steward (15) attempts to break away for a tackle in Friday's game at Wolf Stadium. The Wolves won, 50-14. - Photo by Grace Brown of The Sentinel-Record

PEARCY -- Lake Hamilton rolled to a 50-14 win over El Dorado in the second round of the Class 6A state football playoffs Friday night at Wolf Stadium.

Leading 29-14 heading into the second half, the Wolves put up a strong defensive performance while intensifying their running game even more. Recovering a Wildcat fumble with the 5:48 mark of the third, Woodley rushed the team up to the end zone where quarterback Grant Bearden drove in the touchdown from 3 yards out to cap the game after junior kicker Alex Hurtz' kick for a 36-14 lead.

On the game's opening kickoff, the Wolves suddenly found themselves seeing replays of a horrible nightmare experienced last Friday night when El Dorado junior Kamron Bibby recovered the Wildcats' pooch kick at their own 49 yard line after the Wolves dropped the short dribbler.

Senior quarterback Eli Shepherd then led the Wildcats on a steady 10-play touchdown drive which included an 18-yard pass completion to junior receiver RJ Thomas, followed moments later with a 15-yard completion to Thomas on fourth-and-11 to set up the score. Wildcats senior running back and leading rusher, Branden Moore, took the ball in standing up for a 7-0 lead after the good kick from senior Dave Curruth.

Lake Hamilton answered on its ensuing drive as Woodley and Miller took turns running the ball. This time they recovered the pooch kick to set up a touchdown from Miller from the 6 to knot the score with 4:21 left in the first after Hurtz' kick.

The Wolves recovered an onside kick, but things started to go south again as Miller lost the ball as the Wildcats recovered it. Fortunately, senior Izaiah Clenney picked off a pass to kill the El Dorado drive.

Woodley led the Wolves' offensive drive, putting up 219 yards rushing, while Miller tallied 58 yards rushing and 57 yards in the air.

Bearden completed 4 of 6 passes for 23 yards while tacking on 7 yards on the ground. Quick sophomore Kendrick Martin added 42 yards rushing while Clenney had 11 receiving yards along with eight tackles and an interception.

El Dorado senior quarterback Eli Shepherd was 9 for 14 passing for 67 yards with one interception. Senior running back Branden Moore had 63 yards on the ground along with 22 yards receiving, while junior wide receiver Jackie Washington had six catches for 92 yards. The Wildcats' defensive performance was led largely from the tackling efforts by sophomore Nick Wilson, who racked up 11 total tackles on the night.

The Wolves will face Sylvan Hills Friday night at 7 p.m.