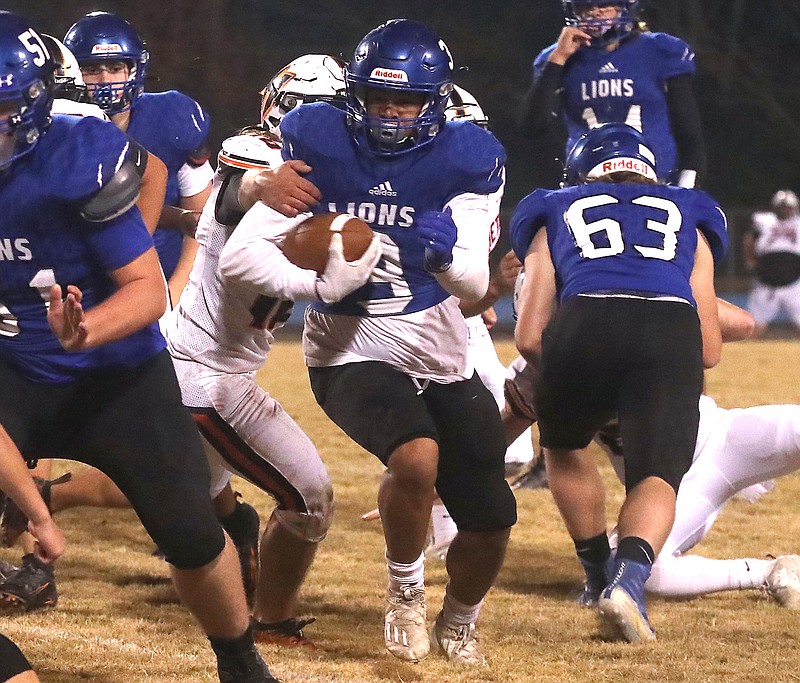 Jessieville’s Matthew Huff (3) heads upfield during first half action against Harrisburg at Jessieville Friday. The Lions won, 60-53. - Photo by Richard Rasmussen of The Sentinel-Record

JESSIEVILLE -- Besides providing idle Harding Academy a visiting opponent this week, the Jessieville-Harrisburg Class 3A playoff game Friday night combined features of hit songs by the Troggs and Ronnie Milsap.

What we had at Phillips Field was nothing short of a wild thing. One in which the visiting Poinsett County Hornets "lost in the fifties."

However short on defense, the 60-53 Jessieville victory kept the scoreboard operator busy and the home fans applauding. Somewhat needlessly, the public-address announcer wished aloud once for everyone to have a good time. Anyone who likes a high-scoring game, one in which defense is optional, not a required course for advancement, might consider it an all-time classic.

The second quarter alone produced 42 points (26 by Harrisburg) and four of the nine lead changes. Jacob Wallace's five-yard touchdown run, his third of four in the game, set the halftime score at 32-30 in the Hornets' favor. Jessieville could have trailed by more had a wide-open Harrisburg receiver not dropped a long pass as the half ended.

In the end, Jessieville had Carson Hair running, passing or tackling with abandon. The encouraging thing for the Lions is that they keep the junior three-year starter for a fourth season.

Listed at 6-0 and 190, Hair ran for four touchdowns and passed to senior Charlie Davis for scores of 35, 60 and 9 yards. Hair ran 51, 10, 4 and 5 yards for touchdowns and was responsible for five 2-point conversions, running for three.

Matthew Huff, a 200-pound sophomore, gave Harrisburg a crash course in north-and-south running, often when expecting something from Hair. Huff's 9-yard touchdown run with 4:30 left put Jessieville ahead for good, capping a drive that he started with a 30-yard run and on which the Lions overcame third and 10 from the Harrisburg 20.

With sufficient time to answer, Harrisburg moved past midfield before a procedure penalty and a lost-yardage play. Samuel Moore, after throwing four touchdown passes, missed twice from the Jessieville 41, the Lions taking over with 2:54 left.

Davis appeared to score on a sideline hitch pass from Hair on third and three but was ruled to have stepped out of bounds at the Hornet 22. Declining to call its final time-out, Harrisburg effectively white-flagged it after Hair took a knee on first down.

This was Jessieville's first playoff victory since 28-14 over Atkins in 2011 and for coach T.J. Burk, who quarterbacked the Lions' 15-0 Class 2A championship team of 2006 (coached by program architect Don Phillips). The Lions finished 8-3 last year after a 42-19 first-round loss at home to Pine Bluff Dollarway.

Jessieville goes to Searcy against Harding Academy, which received a coronavirus-related forfeit from Smackover, with a 7-4 mark. Contributing to a 4-1 start by 3A-5 teams, the Lions play on Thanksgiving Friday along with Prescott, Glen Rose and Centerpoint. According to the Arkansas Activities Association bracket, the Jessieville-Harding Academy winner stays at home the following week against Booneville or Osceola.

The other 3A round-of-16 matchups are Glen Rose at Charleston, Camden Harmony Grove at Centerpoint, Melbourne at Prescott, Lincoln at McGehee, Newport at Hoxie and Greenland at Paris.