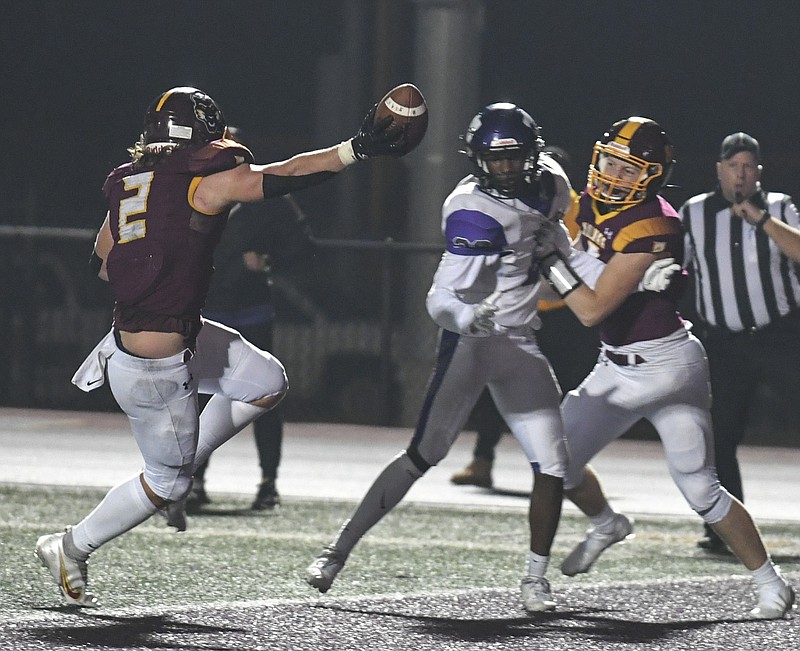 Lake Hamilton junior Owen Miller (2) runs the ball into the end zone for a touchdown during Friday night's 50-14 rout of El Dorado in the second round of the Class 6A state football playoffs at Wolf Stadium. - Photo by Grace Brown of The Sentinel-Record

PEARCY -- Lake Hamilton rolled to a 50-14 victory over El Dorado Friday night at Wolf Stadium to advance to the third round of the Class 6A state playoffs next week.

The Wolves (10-1) will travel to Sylvan Hills (9-3) Friday night after the Bears defeated Little Rock Parkview.

A strong and quick Wildcats' team, playing without standout sophomore receiver DeAndra Burns due to an ankle injury, looked good in the first half. However, the Wolves began to wear them down as play went along.

Leading 29-14 entering the second half, Lake Hamilton junior running back Tevin Woodley continued his strong rushing performance on the night with several key gains. The Wolves other junior running back, Owen Miller, scored at the 1:21 mark of the third quarter to extend their lead to 36-14.

Leading 36-14 entering the fourth, Woodley scored again, and junior quarterback Grant Bearden sealed the win with a keeper from 3 yards out late in the fourth.

"Offensively, they had some real good receivers," he said. "But I thought our kids did a good job of kind of holding them down. I was excited about that.

"I thought they did a good job of doing those things, so if we continue to get better at all of those things, I think we have a chance to ... make a run at a state title. Our kids executed on defense and ... last week I felt like we didn't do as well, but I think this week we did. We need that same type of effort every week if we're going to have a chance to make it."

"Lake Hamilton just running the football," he said. "I mean, those guys are impressive up front, and hats off to coach Gilleran. They've got a great football team, and they're my pick to win it all. I mean, I think they have what it takes to compete for a state championship, and there's four teams left, and I think Lake Hamilton is one of the best left."

Jones said although El Dorado's season is over, he feels good about the team.

"I feel like through the last stretch of the season that we were one of the better teams in the state of Arkansas as far as start to finish," he said. "We didn't play very well to start the season. And our seniors held everything together, and they came to work every single day and got better and I'm really proud of them for that."

On the game's opening kickoff, El Dorado junior Kamron Bibby recovered the Wildcats' pooch kick at their own 49 after the Wolves dropped the short dribbler, much like Sheridan did the previous Friday on its opening kick. Senior quarterback Eli Shepherd led the Wildcats on a 10-play touchdown drive that included an 18-yard pass completion to junior receiver RJ Thomas, followed moments later by a 15-yard completion to Thomas on fourth and 11 to set up the score. Wildcats senior running back and leading rusher Branden Moore took the ball in standing up for a 7-0 lead.

The Wolves responded with a 60-yard, 7-play drive capped by Miller's 6-yard run. After senior Izaiah Clenney intercepted an El Dorado pass heading into the final two minutes of the first quarter, Bearden scored from 4 yards out for a 14-7 lead.

Gilleran also noted that he was pleased with the team's defensive effort.

"It was great," he said. "You know, it's my son (Wolves defensive coordinator Dale Gilleran), and so last week I kind of pulled him into my office, and we had a good chat. And I just said, 'Man, we've got to just simple stuff up, and play better, and let them play fast.' I think he was trying to do too much stuff to stop them. But he did; he (simplified it) and did a better job of calling. ... I know they had some yards, but to hold them to 14 points, I'm excited about the job he did for us."

It was all Wolves from there. Woodley led the Wolves by putting up 219 yards rushing, while Miller tallied 58 yards rushing and 57 yards receiving.

Shepherd was 9-of-14 passing for 67 yards with 1 interception for El Dorado. Moore had 63 yards on the ground along with 22 yards receiving, while junior wide receiver Jackie Washington had 6 catches for 92 yards.