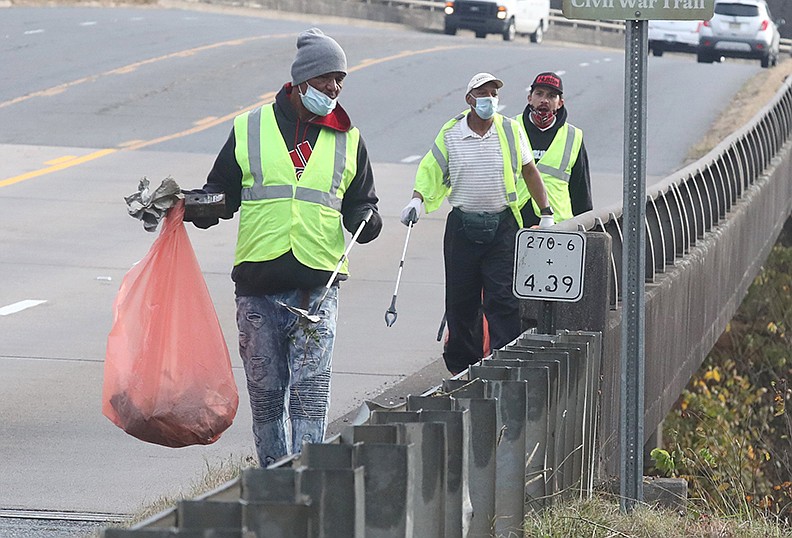 Litter has been removed from public rights of way, and the homeless and indigent are earning a minimum wage. But the city said the Hope Works pilot program it began in earnest this fall is providing a more profound public good than litter abatement and job creation.

The paycheck and dignity of work the program provides are critical to undoing the cycle of poverty, but even more critical are the social services program participants are introduced to. Fostering stronger connections to the homeless and indigent was one of the key take-aways from the poverty summit the city organized in June 2019.

The gathering proceeded from complaints the city received about panhandlers at busy intersections, an activity that became more common after the courts invalidated the state's loitering statute. In response to the ruling, the Hot Springs Board of Directors adopted two ordinances targeted at panhandling. A lawsuit filed by the American Civil Liberties Union of Arkansas led to the repeal of a 2016 ordinance prohibiting pedestrians from soliciting money or other items from motorists.

U.S. District Judge Robert T. Dawson ruled in April of 2019 that the ordinance the board adopted in December 2017 unduly burdened what courts have said is the constitutional right to beg. The ruling enjoined the city from enforcing the ordinance and required it to pay $30,702 in attorney fees to ACLU of Arkansas.

"It's not so much the idea of paying these folks," Hot Springs Solid Waste Director Randy Atkinson said. "It's more so the outreach after the fact that helps them get off the streets. The goal is not to necessarily see these folks put some money in their pocket. It's more so the outreach to try to get them off the street and help them help themselves."

"Now that we've gotten it up and running, it's really taken off," he said. "Not only is it helping keep our main corridors clean, we're starting to see other successes. We've had two that have worked on that program who have now gained employment. They have regular paychecks coming in. They're no longer homeless. We want to continue to build on that."

The city and Jackson House, the nonprofit, third-party provider the city enlisted to run the program, announced their partnership in December, but the coronavirus pandemic delayed the program's start date. The first litter crew went out in September.

Robert West lost his landscaping job with a local church, but the program has helped keep him afloat. He's been out about four times with the Hope Works crew.

"Right now I'm laid off," he said. "It's hard to find a job with this (virus) going around. I'm just skimming along, barely making it, but God's been good to me."

Program Director David Cook said more people are mustering at the Jackson House parking lot than the program can absorb. As many as 23 have showed up for the roughly half-a-dozen spots that are filled three days a week. The city said the pandemic has forced it to limit participation, as it doesn't want too many people in the van it donated.

Atkinson said crews have removed more than 2,700 pounds of litter from state and federal highways in the city limits. He's focused their work near interchanges along the King Expressway. Their work supplements city litter crews, which Atkinson said focus on city-maintained rights of way.

"I told (Cook) I want to do all the interchanges of the bypass," he said. "I have them hit those areas at least one day a week."

The 2021 budget the board will consider next week appropriated $100,000 for the program from the city's solid waste fund, Atkinson said. 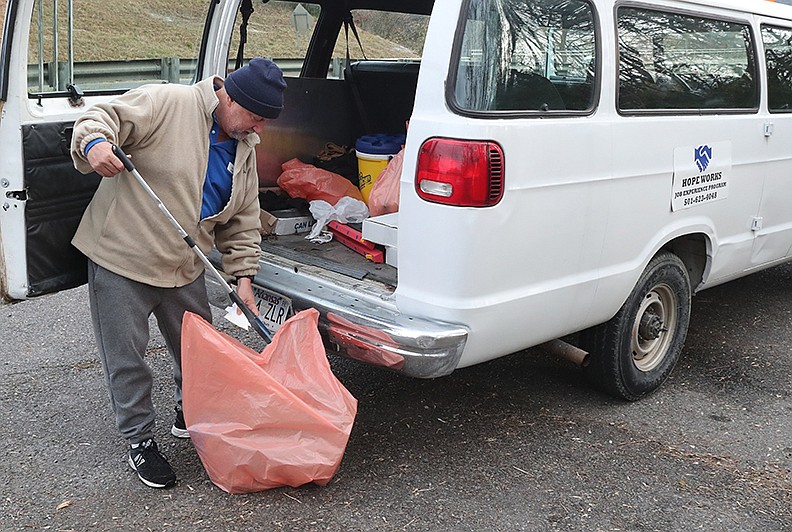 Hope Works Director David Cook looks through some trash on Malvern Avenue Tuesday. - Photo by Richard Rasmussen of The Sentinel-Record