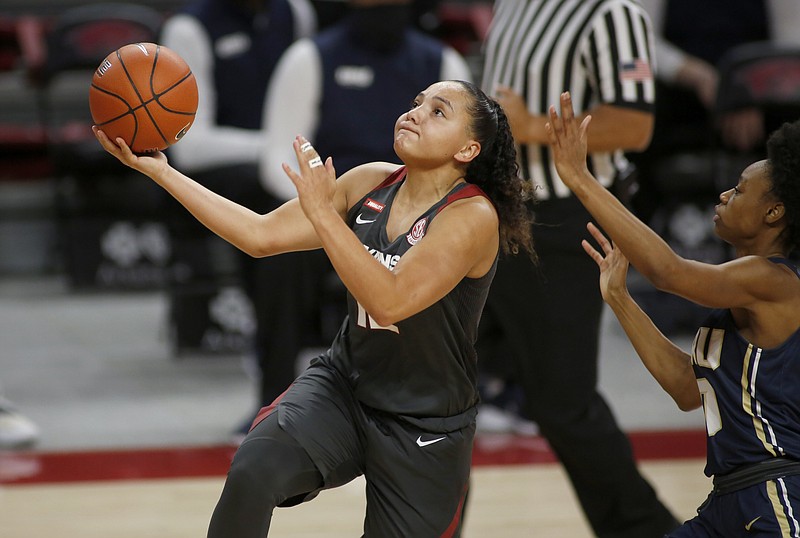 The No. 14 University of Arkansas women's basketball team still enjoyed a big lead at halftime and cruised to a 96-49 victory against Oral Roberts on Wednesday afternoon in Bud Walton Arena.

Arkansas missed nine of its first 10 shots from the floor but used a big game from graduate transfer Destiny Slocum and its defense to roll over the Golden Eagles.

Neighbors said his players were talking to him the entire first half trying to figure out what was wrong even though the Razorbacks enjoyed a 45-19 halftime advantage.

"It was everybody, 'Coach, I don't feel like myself,'" Neighbors said via Zoom after the game. "And it was me. I didn't feel the same. I don't think any of us did. It was just different."

Neighbors said the Razorbacks' coaching staff spent more time talking about where people sat on the bench than in-bounds plays for the game. But Neighbors' focus was on the players getting the opportunity to play with so many games across the country being canceled this week because of the ongoing covid-19 pandemic that shelved college basketball in March and continues to be an issue across the country.

"Just to play, y'all have no idea how good it felt, how much it meant to the kids that our administration's putting us in a place to safely be able to pull this off," Neighbors said. "We've been very diligent in following protocols and just being really aware of mitigating as many possibilities as we can.

"But I thought our defense was outstanding in the first half, and that's what carried us. And then in the second half that led to a bunch of transition, and then I think our conditioning kicked in in that second half. We looked more like ourselves."

Slocum, a senior transfer from Oregon State, scored 17 of her game-high 22 points in the first half to help get Arkansas going in the right direction. But she felt some butterflies, too, in her Razorback debut.

"Just being able to share the floor with my teammates was powerful," Slocum said. "To me, it's my first time playing in Bud [Walton Arena], and so it's like I feel like a little freshman, kinda like everything was a first. But just a very old freshman."

Slocum led the way offensively, but she had plenty of help as the Razorbacks placed five players in double figures. Redshirt senior Chelsea Dungee added 17 points, while Makayla Daniels and Erynn Barnum scored 14 points each. Taylah Thomas, a 6-1 senior, also grabbed a game-high 13 rebounds for the Razorbacks.

Sophomore Marquesha Davis also enjoyed a big game off the bench with 11 points, 11 rebounds and 5 steals in 17 minutes.

Davis, a 6-0 sophomore who played at Springdale, keyed an 11-0 spurt to finish the first quarter with a couple of steals and a layup that helped the Razorbacks pick up the tempo and lead 17-6.

Neighbors said Davis' defense stood out in practice last year even though she didn't get a lot of court time.

"Best on-ball defender we've had for two years," Neighbors said. "We couldn't get around her in practice. She can reach and not get out of position. You saw a few of those flashes we see in practice where we just shake our head and go, 'Wow, I can't believe she just did that.'"

Neighbors said his team specifically spent more time on defense in the preseason and it paid off. The Arkansas defense frustrated the Golden Eagles to the tune of 33% shooting (17-of-52) from the floor and 29 turnovers, including 17 in the first half. The Razorbacks also had 18 steals.

"We doubled the amount of time in preseason on defense," Neighbors said. "We felt like we had enough offensive weapons to carry us. And I think you look at it, nobody is going to think they played that great offensively and we had 96. So the offense will be there."

Arkansas will now head to Fort Myers, Fla., to take part in the Gulf Coast Showcase this weekend, playing three games in three days after being off for today. The Razorbacks will play Wake Forest on Friday, followed by tournament host Florida Gulf Coast on Saturday and finish the event against No. 12 Maryland.