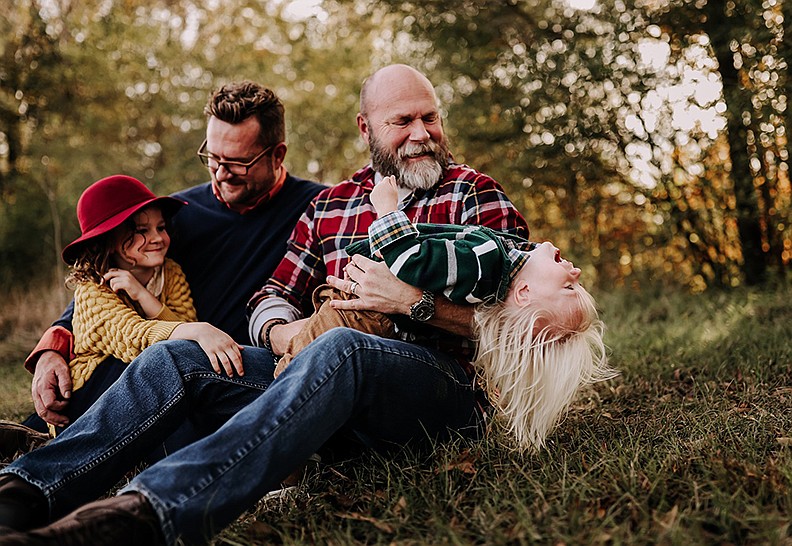 The pandemic has acted as a quadruple threat to the lives of local couple Stephen and Eddie Inman-Crawley, but in making it through the past eight months the two have learned to live in love, happiness and thankfulness.

Before COVID-19, the couple lived a busy life of managing two locations of LoX Salon, managing 420eats, working in real estate, and parenting two young children. Once the pandemic began, many different levels of fear and stress were added to their already full plates.

"The first week I just watched the news and it was like, I was in disbelief that we were shut down and the world was in this pandemic," Eddie Inman-Crawley said. "I was freaking out and I just cleaned my whole house from top to bottom."

"And being with our kids. I mean, take advantage of that time because there's going to be a time where they don't want to be around you," he said, laughing. "We actually enjoyed it."

"Not the whole pandemic part," Eddie Inman-Crawley said, "but being home and being with our kids, we enjoyed that."

Stephen Inman-Crawley said little things like taking advantage of Netflix and Hulu provided their family comfort at the start of the pandemic.

"I mean I would take the kids, we would walk around the block, just to get them out because we couldn't go to a park, we couldn't do anything," Eddie Inman-Crawley said. "So keeping them entertained as much as we could without doing anything."

"We actually enjoyed it; it was kind of a break," Stephen Inman-Crawley said.

While their family eventually took the downtime as an "enjoyable break," once things began reopening, their lives became busier and more hectic than ever.

The pandemic temporarily closed both locations of LoX, and while they were allowed to reopen the salon, the pandemic pushed them to close the Little Rock location, leaving the Hot Springs location flooded with business while juggling new restrictions.

Stephen Inman-Crawley, who works as an agent for Rix Realty, said when the pandemic first hit the real estate business was "scary," but once everything settled down interest rates dropped and business grew rapidly.

As an outdoor eating location, the pandemic never closed 420eats, but instead resulted in it thriving too.

"Real estate was busy, the salon was busy, school was shut down; we're trying to teach school, open and close the food court (and do) salon scheduling," Stephen Inman-Crawley said.

"And chasing after two kids, it was a nightmare for that; but we made it through," Eddie Inman-Crawley "We did what we had to do and made it through."

Stephen Inman-Crawley was tasked with doing most of the home schooling for their 7 and 3-year-old.

"I'm not a very good teacher," he said. "I mean I'm a good teacher. I don't have the patience. God love the teachers because they are definitely underpaid."

Despite the roller coaster of emotions, changes and handling their business, they both said they are genuinely happy.

"Is it always easy?" Eddie Inman-Crawley asked. "No, it's not always easy, but we make it work."

"Yeah, I get on his nerves and he gets on mine, but in the end we know what the end goal is," Stephen Inman-Crawley said, jokingly.

In light of Thanksgiving coming up, the two said they have also learned to be thankful through all of this.

"I think being grateful that we're all healthy and have gotten through it without, to our knowledge, giving it to someone else," Stephen Inman-Crawley said. "That's been probably our biggest concern because we probably would survive it, but the idea of possibly giving it to someone who wouldn't survive -- I don't know, that would break my heart."

As for advice they would offer to everyone else coping with the pandemic, Stephen Inman-Crawley said you have to make the best of every situation, and Eddie Inman-Crawley added that you have to "hang in there for now."

"We've been very fortunate to be able to survive and keep our businesses up and going," Stephen Inman-Crawley said. "And advice to other people would be keep your head in the game, keep plugging along."

"Just move forward. It may be in a different direction or different route, but find your way or your route that you can (take)," he said.

"It will end one day," Eddie Inman-Crawley said.

"It's not easy," Stephen Inman-Crawley said, "and the last thing I would like to leave is wash your hands and wear a mask."