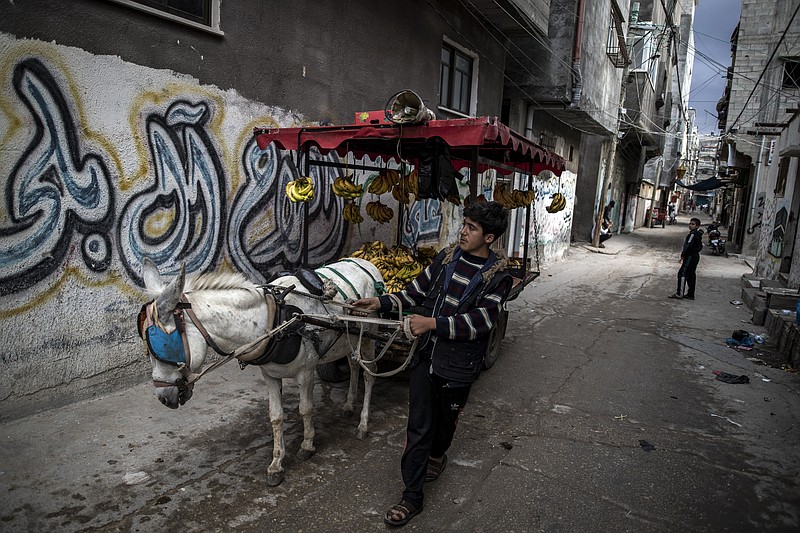 A Palestinian boy sells bananas on a donkey carte in an alley in the Shati refugee camp, in Gaza City, Wednesday. Israel's blockade of the Hamas-ruled Gaza Strip has cost the seaside territory as much as $16.7 billion in economic losses and caused its poverty and unemployment rates to skyrocket, a U.N. report said Wednesday, as it called on Israel to lift the 13-year closure. - AP Photo/Khalil Hamra

JERUSALEM -- Israel's blockade of the Hamas-ruled Gaza Strip has cost the seaside territory as much as $16.7 billion in economic losses and sent poverty and unemployment skyrocketing, a U.N. report said Wednesday, as it called on Israel to lift the closure.

The report by the U.N. Conference on Trade and Development echoed calls by numerous international bodies over the years criticizing the blockade. But its findings, looking at an 11-year period ending in 2018, marked perhaps the most detailed analysis of the Israeli policy to date.

Israel imposed the blockade in 2007 after Hamas, an Islamic militant group that opposes Israel's existence, violently seized control of Gaza from the forces of the internationally recognized Palestinian Authority. The Israeli measures, along with restrictions by neighboring Egypt, have tightly controlled the movement of people and goods in and out of the territory.

Israel says the restrictions are needed to keep Hamas from building up its military capabilities. The bitter enemies have fought three wars and numerous skirmishes over the years.

But critics say the blockade has amounted to collective punishment, hurting the living conditions of Gaza's 2 million inhabitants while failing to oust Hamas or moderate its behavior. Gaza has almost no clean drinking water, it suffers from frequent power outages and people cannot freely travel abroad.

"The result has been the near-collapse of Gaza's regional economy and its isolation from the Palestinian economy and the rest of the world," the U.N. agency said in a statement.

The last war was especially devastating, killing over 2,200 Palestinians, more than half of them civilians, and displacing some 100,000 people from homes that were damaged or destroyed, according to U.N. figures.