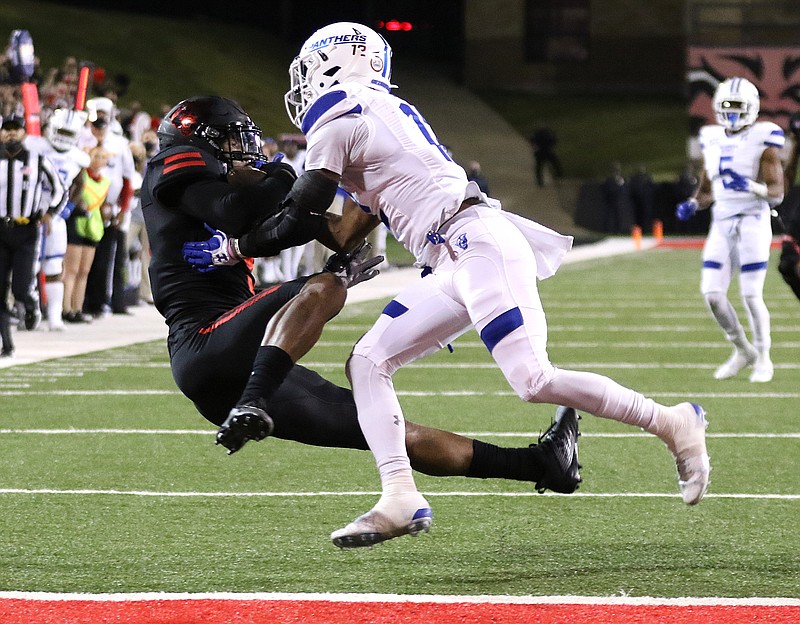 Jonathan Adams Jr. stood behind the podium with a smirk on his face. His Arkansas State University teammate and fellow senior wide receiver Dahu Green sat across the way, a grin on his face, too.

Following a 59-52 win over Georgia Stae and a performance in which Adams and Green combined for 24 receptions, 349 yards and four touchdowns, Adams was asked if he thought they were one of the best one-two wide receiver punches in college football.

Both Adams and Green had career highs in catches and yards against Georgia State, and also caught two touchdown passes for the second consective game. Green caught nine passes for 172 yards, while Adams caught 15 for 177 -- the 15 receptions ties now-NFL running back J.D. Mckissic's school record for receptions in a single game in 2013 against Missouri.

But this isn't the first time the two have showcased their dynamic playmaking ability this season. In fact, Adams' claim that they're the "best in college football" isn't so far-fetched, according to the statistics.

Arkansas State is currently the only school in the country to have two wide receivers in the top 10 in receiving yards this season, with Adams ranking first at 539 yards and Green eighth at 419. Adams and Green also both rank in the top five in touchdown receptions -- Adams is tied for second with seven and Green is tied for fifth with five.

"If anybody's got a better duo than that -- especially at the level where we're at -- good luck to you," coach Blake Anderson said. "It's got to give defensive coordinators nightmares."

Anderson added that guys like senior receiver Brandon Bowling -- who caught six passes for 191 yards and a score Thursday and is tied for ninth in the country in touchdown receptions with four -- have benefitted off Adams and Green's success. In many ways, the two allow the offense to be as productive as it's been.

"Brandon is playing at such a high level. And our tight ends are catching the ball. That's the way this thing is built," Anderson said. "And it's supposed to be built that way. When you get all those pieces, it's a lot of fun to call plays. It really is. Coach (Keith Heckendorf) is like, 'Who do I get it to next?'"

Adams and Green were expected to be two of Arkansas State's top offensive weapons coming into the season, but both have had their trials and tibulations over their careers, whether it having to be patient or overcoming injuries.

For Adams, he had to wait his turn, sitting behind former ASU receivers Omar Bayless and Kirk Merritt. During that time, Adams said he slowly matured as a player and person, while gaining poise in his game.

"It's all about confidence," Adams said. "My confidence is probably at all-time high now. I'm expecting to catch every ball that come my way. When I drop one, like when I dropped the touchdown, I'm hard on myself about it because those are easy catches... I could have had 16 (receptions). I dropped a ball. So, I'm still on that."

And for Green, who transferred from Oklahoma to ASU in 2017, he's had to overcome a broken ankle in 2018 and a torn PCL in 2019, which made Thursday night's performance that much sweeter.

"I feel great," an emotional Green said after the game. "It's been a long road. I've been fighting a lot of adversity. But to be out there with my boys, make plays, just do what your team needs you to do, there ain't no feeling like it."

It's that attitude and growth from Adams and Green that makes Anderson proud to be their coach.

Having recruited Adams out of Jonesboro High School and helping guide Green to become the player most believed he always could be, Anderson says the duo has become more than a couple playmakers for Arkansas State.

"I enjoy being around them. Two of my favorite dudes -- when Dahu isn't driving me crazy, of course," Anderson said. "It's what kind of fills you up in this profession. It's why I've been doing it this long, because at times it's nuts. But the relationships you've got with guys like that, watching them perform, seeing how they pull for each other, the leaders they've become, all of that is awesome. It's a lot of fun when you get it right and we got it right with those guys."