Familiar opposition in the race for JP 9 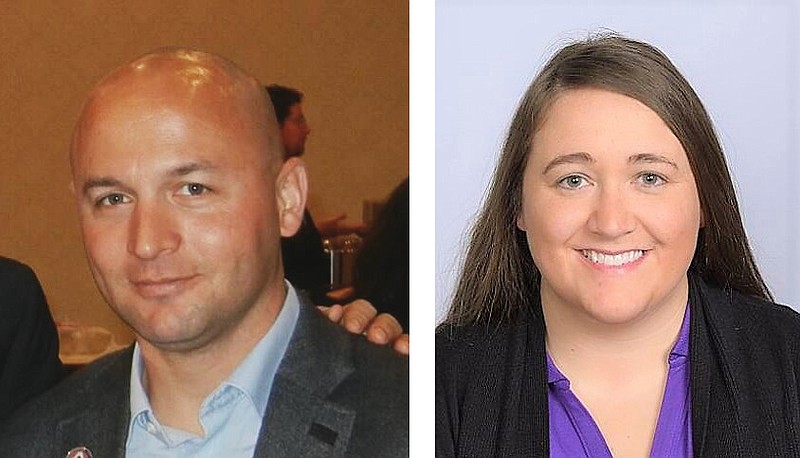 In a rematch of 2018, Democrat Cortney McKee is again challenging five-term incumbent Republican Matt McKee, no relation, for his District 9 seat on the Garland County Quorum Court.

Cortney McKee, 37, said she decided to run for the position when she learned Matt McKee would be unopposed.

"The reason being, that the people of Garland County, when they go to get a ballot, deserve for that ballot to have choices on it," she said. "We have no other way as citizens to hold them accountable, except for voting them out, and we can't do that unless someone runs against that person."

Cortney McKee said she is also passionate about a number of issues and about government.

"The first issue is, I would really like to increase the visibility of the quorum court and just get more citizens involved in paying attention," she said. "One thing that I would like to do is livestream the quorum court meetings; of course they're open to the public, but this particular year, the online platform has become so much better out of necessity for the coronavirus and I just feel like it would be an easy way for citizens to see what their county officials are talking about."

Another issue she would "like to tackle" is the problem with traffic in the county which is "really bad," she said.

"I'm not sure what ways to tackle that, but I would definitely be open to suggestions, and I would definitely seek the advice of people who know about that more than I do. And then I would like to see the county and the city work together a little better," she said.

Matt McKee, 37, who is in his 10th year as a justice of the peace, said he plans to tackle financial issues that have come about because of COVID-19 and the "shortfall" in revenue if reelected.

Previously in consistent opposition of the county using $75,000 of public money from the quorum court to support the Hot Springs Metro Partnership, Matt McKee said he will no longer publicly oppose that decision. He said he is still of the personal opinion the Metro Partnership should be funded through its commercial contracts with private businesses, and that taxpayer money is "better spent in other ways."

He explained the reasoning for the past opposition from the quorum court, as well as the settlement it reached with The Greater Hot Springs Chamber of Commerce, this way:

"So, over the past several years we have had an issue with the city of Hot Springs where the residents in my district and other districts outside the city limits were not being treated, in our opinion, fairly, when it came to supplying businesses, builders and residents with water. It's a very complicated history that includes discussions about improvement districts and the federal government and loans and all kinds of things.

"The number one obstacle for several years in Garland County, outside the city limits, the number one obstacle to development, according to the Metro Partnership and the Chamber of Commerce, was the inability for businesses to gain access to water to be able to develop a business or multiple housing units, and they were in a tight spot in the Metro Partnership and the chamber, because they were funded by both the county and the city, and by people that they represent within their organizations, and many people on the quorum court did not see a reason to continue funding these business development organizations if they were not going to advocate strongly for a change in city policy with regards to water.

"Now, since that time the city has made some adjustment in their policy, and we have a very good relationship with the chamber and the Metro Partnership."

Cortney McKee's initial response on the issue was simply that she "very much" appreciates the work of the Hot Springs Metro Partnership in bringing businesses and development into the area, but would "like to look more into the private interests" it funds, before giving a specific answer.

She said that, if she elected, she would bring diversity to the quorum court.

"Right now, there's only one female justice, of the 13 justices, and it's not like that's a new development; that's regularly, every term," Cortney McKee said. "I just think if women are going to make up half of Garland County, then we should be better represented on the quorum court."

Matt McKee said that, over the last 10 years, he and the other members of the quorum court, in cooperation with the county's elected officers, have worked "really hard" to ensure the services provided for citizens are done in an efficient and cost-effective manner, and that the county is in a financial position where it can afford to pay its employees at a wage that encourages long-term employment, so they don't have "high turnover."

"We have created the comptroller's office to ensure that we are complying with all state and federal laws, and making sure that every penny of taxpayer money is accounted for and spent in the most efficient manner possible," he said. "So my goal is to continue to streamline county governments, and make sure it is responsive to the citizens that we represent, at the same time that it is not interfering in their best efforts to improve their lots and their businesses and their family's standard of living."