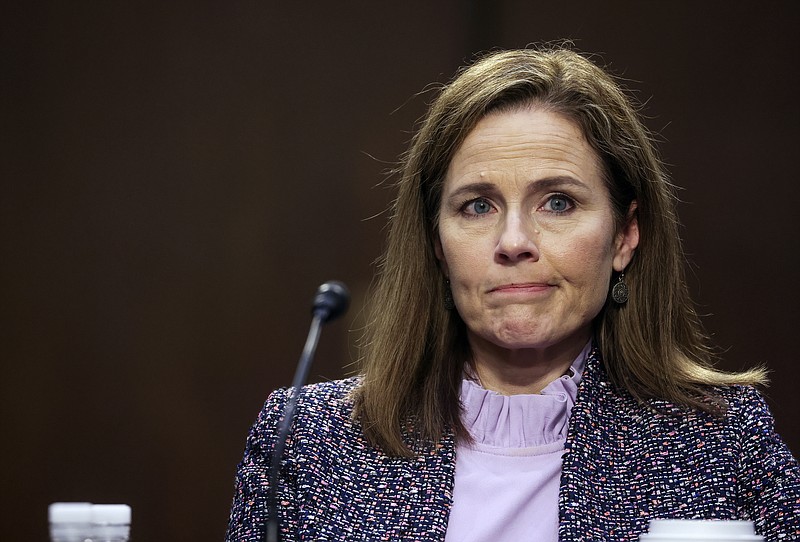 Supreme Court nominee Amy Coney Barrett departs with her husband, Jesse, after the third day of her confirmation hearings before the Senate Judiciary Committee on Capitol Hill in Washington, Wednesday. - Jonathan Ernst/Pool via AP

WASHINGTON -- For Republicans, the nomination fight over Amy Coney Barrett is a chance to seal conservative control of the Supreme Court for decades. For some GOP senators, it's also a lifeline they hope will preserve their political careers and their party's control of the chamber in November's elections.

The battle over President Donald Trump's pick is letting Senate Republicans facing tough reelections highlight issues like abortion and link themselves to a conservative, religious woman whose confirmation seems certain. Most importantly, they hope it will change the subject from Trump and his failure to control the coronavirus pandemic, which threaten to make Election Day miserable for the GOP.

But even some Republicans privately doubt the court battle will distract voters enough to make a difference. And Democrats are appealing to voters too, saying the GOP-led Senate is ignoring greater needs to quickly cement a 6-3 conservative court majority, threatening Democratic priorities like former President Barack Obama's health care law and the right to abortion.

"The Senate has a big job to do right now, and that's fighting the virus and getting people the relief they need," said Democratic consultant Rodd McLeod, citing long-stalled economic relief legislation. "Instead, they're rushing through this nomination."

There are competitive races for around a dozen GOP-held seats as the party defends its 53-47 Senate majority in next month's elections. About half of them are in states like Montana and Kansas where Trump won easily in 2016 and embracing Barrett should win broad approval. But the rest are in battleground states like Arizona, Georgia, Iowa and Maine, where backing her is riskier.

Either way, both sides are using the Supreme Court battle in fundraising appeals and other ways that underscore its political potency.

From the day after the September death of Justice Ruth Bader Ginsburg -- whose vacancy Barrett will fill -- through this Wednesday, each party has spent around $4 million on broadcast TV commercials highlighting the nomination fight, according to Kantar/CMAG, the ad-tracking firm. Democrats have advertised in seven Senate races and Republicans in eight. All but one, Sen. Doug Jones' uphill effort to survive in GOP-dominated Alabama, are contests where Republicans are defending seats.

In a common GOP theme, a spot by Senate candidate Rep. Roger Marshall of Kansas says Democratic challenger Barbara Bollier would be "just another liberal rubber stamp" for judges favored by Democratic leaders.

The liberal group Demand Justice is running its own ad against incumbent GOP senators in Arizona, Colorado, Iowa, Maine and North Carolina, hitting them for ignoring the pandemic while "rushing to play politics with the court."

Four GOP senators in competitive campaigns are on the Senate Judiciary Committee, which wrapped up hearings Thursday on Barrett's nomination. All four -- John Cornyn of Texas, Lindsey Graham of South Carolina, Joni Ernst of Iowa and Thom Tillis of North Carolina -- used the sessions to praise Barrett and flash opposition to abortion or champion other hot-button conservative favorites.

That didn't escape the notice of Sen. Kamala Harris, D-Calif., her party's vice presidential nominee and a Judiciary Committee member. She recited the number of people from those states who she said would lose coverage if the justices strike down the health care law. The court is scheduled to hear arguments in a GOP-backed case seeking to dismantle the statute the week after the election.

No GOP senator stood to potentially benefit more than Graham, the Judiciary chairman.

Seeking his fourth term from a state where Trump remains popular, Graham faces a tossup contest against Democrat Jaime Harrison, who raised a record $57 million in this year's third quarter. Chairing the televised hearings gave Graham four days to boast about golfing with Trump, demonstrate how GOP Senate control means more conservative judges and to gesture to women voters, many of whom have fled the party because of Trump.

Graham said Barrett's confirmation will pierce "a reinforced concrete barrier around conservative women." Barrett, 48, has previously expressed opposition to abortion but during the hearings asserted that as a justice she'd set aside her personal views.