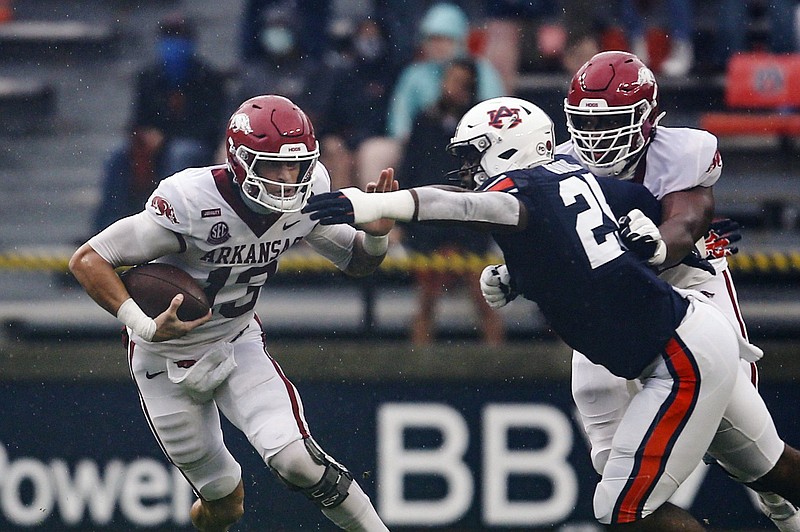 Arkansas quarterback Feleipe Franks (13) scrambles for yardage as Auburn defensive back Smoke Monday (21) tries to tackle him during the first quarter of last Saturday's game in Auburn, Ala. - Photo by Butch Dill of The Associated Press

FAYETTEVILLE -- Feleipe Franks was in Reynolds Razorback Stadium when the University of Arkansas last won an Southeastern Conference home game.

At the time, Franks was a true freshman quarterback for the Florida Gators making road trips.

Now Franks is a fifth-year graduate senior starter for the Razorbacks.

Yeah, it's been a while since Arkansas won an SEC home game.

"I mean, we want to win every game, but definitely in our home stadium," Razorbacks junior receiver Mike Woods said. "We ain't gave our home fans a chance to celebrate a win with us in awhile, an SEC win for sure.

"We've just got to bring one home this week so we can all celebrate and have fun and just turn the state up."

The Razorbacks have lost 12 consecutive SEC home games -- 10 in Fayetteville and two in Little Rock. They also lost to Texas A&M at AT&T Stadium in 2017 and 2019 in designated home games for Arkansas, but that were played on a neutral field.

Barry Odom, who is now Arkansas' defensive coordinator, was Missouri's head coach in two victories at Arkansas during the streak.

Odom's Tigers beat the Razorbacks 48-45 on a last-second field in Fayetteville in 2017 -- Bret Bielema was fired as Arkansas' coach immediately after the game -- and 21-14 in Little Rock last season in what turned out to be Odom's last game as Missouri's coach.

Georgia continued the SEC home losing streak with a 37-10 victory over Arkansas at Razorback Stadium to open this season.

Crazy as it sounds, the Razorbacks' last three SEC victories have been in the state of Mississippi.

The Razorbacks' most recent victory at Mississippi State -- in Sam Pittman's second game as head coach -- ended their SEC losing streak at 20 games.

"I didn't even know we had a home losing streak until you just told me," Pittman said to a reporter this week. "I figured we had a losing streak since we hadn't won in a while.

"Winning (today) would be incredible. I mean, that's what we all go out and strive to do on Saturday.

"I don't know if breaking streaks are any kind of a big deal for us. We're just trying to win football games."

T.J. Hammonds, a fifth-year senior receiver from Little Rock, is the only Razorback left who played in the victory over Florida in 2016.

A running back at the time, Hammonds had one carry for 15 yards.

Safety Santos Ramirez got Arkansas off to a fast start by intercepting a Luke Del Rio pass and returning it 24 yards for a touchdown to give the Razorbacks a 7-0 lead in the first quarter.

Williams finished with 26 carries for 148 yards and 2 touchdowns and had 2 catches for 22 yards.

Deatrich Wise, Jeremiah Ledbetter and Bijhon Jackson had sacks for the Razorbacks, who out-gained Florida 466 yards to 241.

Pounding the Gators put Arkansas into the Associated Press poll at No. 25, but the Razorbacks didn't get to enjoy their success for long.

The next week No. 24 LSU came into Razorback Stadium and won 38-10 to start Arkansas' SEC home losing streak.

"No matter who rolls in there, we expect to defend our field," Arkansas redshirt junior offen1sive tackle Dalton Wagner said. "Winning at home is always a big thing because, like, it's home, you know?

Because of social distancing precautions, all SEC teams are limiting their capacity for home football games to between 20% and 25%.

""I don't think there's any impact," Ole Miss Coach Lane Kiffin said of the home crowd. "Maybe a point or two just because you're supposed to play better because you're used to playing on the field in that stadium.

"But I don't think the crowd is going to (have an) effect at all."

"Certainly wish we had a normal crowd last week the way the game was going," Kiffin said of playing Alabama. "How much energy it would have been to try to help us on defense."

Arkansas' announced attendance for the Georgia game was 16,500.

"We obviously want the 16,000 people that we are allowed to have in our stadium to be extremely loud," Pittman said. 'That would help us.

"I don't want to speak for other coaches, but for me, going on the road is not near like what it used to be as far as the advantage of crowd noise.

"However, if you get 16.000 people in a stadium and they're raising heck on every snap, it's certainly going to help you a lot more than if you're on the road."

De'Vion Warren, a fifth-year senior receiver and kickoff returner for the Razorbacks, said the team tries to win every game wherever it's played.

"This game being a home game makes it even better if we win, and we need to win," Warren said. "Playing at home, it's always good to protect your house. Always good to give your fans something to cheer on."