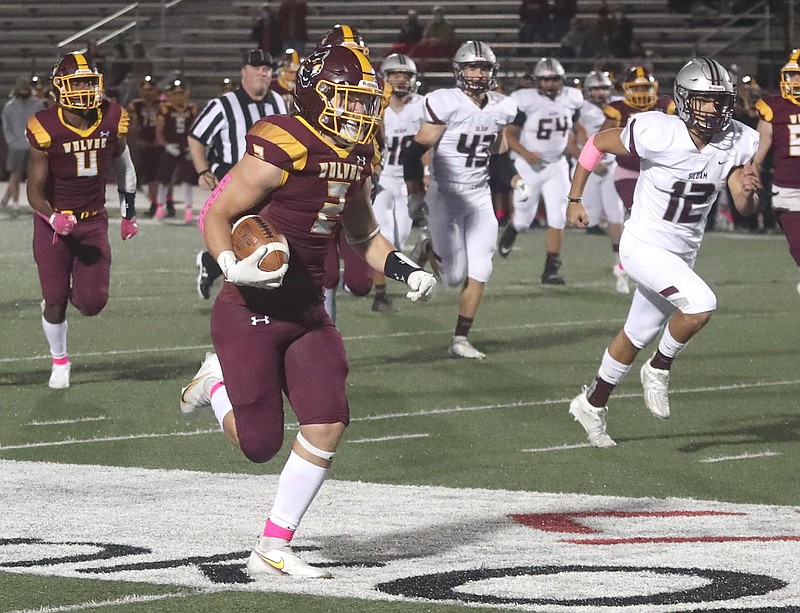 Lake Hamilton’s Owen Miller (2) runs for the first touchdown of the game against Siloam Springs during first half action at Lake Hamilton Friday. Photo by Richard Rasmussen of The Sentinel-Record

PEARCY -- After scoring on each of their initial four possessions, Lake Hamilton continued to dominate as it picked up a 42-19 win over Siloam Springs Friday night at Wolf Stadium.

The Wolves (6-0, 3-0) were led by fullback Tevin Woodley and running back Owen Miller, the latter finishing the night with three touchdowns.

Kendrick Martin broke free on a reverse for a 66-yard touchdown just 3:51 into the second half. Kicker Alex Hurtz made it 35-6.

Woodley picked up his only score of the night with 55 seconds left in the third frame. He punched his way into the end zone from the 3-yard line for a 42-6 lead.

Siloam Springs (3-4, 1-3) refused to give up, scoring two touchdowns in the fourth quarter as quarterback Hunter Talley found Christian Ledeker for touchdown passes of 21 and 30 yards just over a minute apart. After kicker Ronald Mancia made the point-after attempt on the first, the Panthers opted for a conversion, but Lake Hamilton's Gavin Robbins picked off the pass to leave the score at 42-19 with 4:26 left in the game.

Miller picked up his first touchdown just 19 seconds into the game, finding an opening for a 51-yard breakaway on the Wolves' first play from scrimmage. Hurtz made it an early 7-0 lead.

Siloam Springs got their offense going early as well, moving the ball down the field before Elijah Coffey got the handoff, breaking free for a 23-yard run, but he lost control of the ball at the 1, and Lake Hamilton's Gavin Robbins recovered the fumble at the 2 with 8:36 left in the first quarter. The Wolves found themselves in the end zone 11 plays later as Bearden ran the ball in from the 1 to cap the 98-yard drive for a 14-0 lead with 3:01 left in the opening quarter.

Miller's second score came with 7:37 left in the first half as he found a hole for a 7-yard sprint, and Hurtz made it 21-0. The Panthers finally got in the end zone, capping a nine-play, 76-yard drive with Talley punching his way in from the 1 with 4:00 left in the half, but the kick went wide for a 21-6 Wolves lead.

Miller found another opening on the Wolves' fourth drive of the game, breaking three tackles on his way to a 62-yard touchdown for a 28-6 lead with 3:07 left in the half. The Wolves attempted to break free on their final drive of the half after recovering another Panthers' fumble, this time at the 13-yard line with 40 seconds left, but the Panthers defense held for the two plays before the halftime break.

The Panthers finished with 427 yards of offense, including 234 passing yards. Talley was 12 for 18 with two scores. Ledeker had four catches for 112 yards and two TDs. Talley led the ground assault as well, rushing 15 times for 95 yards with Jeff Phizema adding 73 yards on 19 touches.