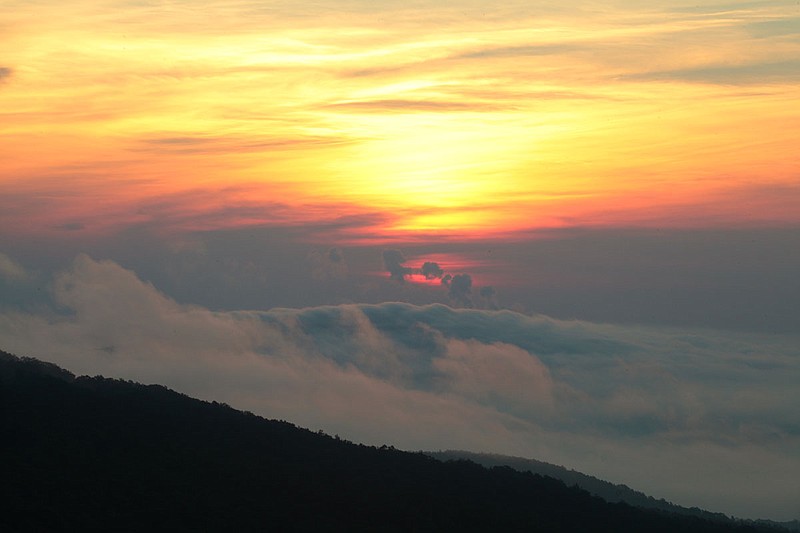 Situated at the tallest point in Arkansas, Mount Magazine State Park lends offers its fair share of incredible scenery. - Photo by Corbet Deary of The Sentinel-Record

Many of our state parks are nestled in the midst of sheer beauty, some of which are situated in mountainous terrain. And it just so happens that the destination we'll be discussing today is one such place.

Mount Magazine State Park is perched atop Arkansas' tallest peak, at 2,753 feet above sea level. And what might be awaiting those who travel to this 2,234-acre facility? Well, I would suggest there are reasons aplenty to add Mount Magazine to your list of things to do.

As one might suspect, a number of vistas await visitors, some of which are accessible from the road. The views from these spots are incredible, as one can easily see for miles.

The vistas are impressive throughout the entire day. However, those who arrive during early morning and late evening hours can anticipate a skyline that is painted with a palette of brilliant colors.

I fact, I can recall one sunrise in particular when a brilliant pink sky collided with a blanket of heavy fog hovering over the distant mountains. I have witnessed and photographed hundreds of sunrises throughout my career as an outdoor photographer. And I can say with all certainty that the scene that unfolded before our eyes on that particular morning is unsurpassed.

Those who prefer striking out beyond the road's edge might consider the state park as a potential destination, as well. More than 14 miles of designated paths meander along the mountaintop and into the valleys below. And a portion of these trails connects with Ozark National Forest trails, lending to nearly 60 miles of hiking and backpacking opportunities.

Fortunately, the trails winding within the perimeters of the park vary in difficulty levels, providing hiking opportunities for the most avid and novice hikers alike.

The Bear Hollow Trail begins at the Benefield Picnic Area and makes a 2.8-mile journey along the upper rim of Bear Hollow, while en route to the northern trailhead, located on Highway 309.

This particular route is touted to hold some of the most magnificent scenery throughout the entire trails system. In fact, the aforementioned sunrise was experienced from Sunrise Rock, which is located on the path.

Those embarking upon a trek along the Bear Hollow Trail will cross a number of wet-weather creeks during their journey. Some of these drainages lead to beautiful waterfalls immediately after rainfalls.

Benefield Trail consists of 2 miles and meanders through a historical part of the park. The easy walk is divided into two loops and visits the Benjamin Benefield homestead.

Benefield managed 160 acres of farmland on the mountain during the 1800s, growing onions, turnips and potatoes. He also maintained an apple orchard and a vineyard on the property. One of his children is buried beside the entrance road.

One of the loops consists of a 1.1-mile walk while following a route constructed by WPA workers in 1938. The designated path lends to distant views of the Ouachita Mountains and River Valley.

The remaining loop winds nine-tenths of a mile while making its way alongside a wildlife pond. The Mossback Ridge Trail is also accessible from the loop.

The Greenfield Trail begins at the Greenfield Picnic Area and crosses the road where the Big Shoal Creek heads, eventually tying in with the Mossback Ridge Trail. The route consists of nine-tenths of a mile and is considered as moderately difficult.

The Mossback Ridge Trail stretches 2.1 miles and acquired its namesake from a settler who served the community as a farmer and teacher. The trail is touted as moderate. There are three steep ascents awaiting those who embark upon a trek along this particular route. However, the remainder of the jaunt is pleasant.

The North Rim Trail begins just west of the Visitor Center and makes its way 2.7 miles through terrain deeming the hike as moderate to strenuous.

The designated path runs alongside the north rim of the mountain, eventually connecting with the Cove Lake Trail. The trail makes its way through bountiful hardwood forests, stands of scrub oaks and cedar glades, occasionally separated by small creeks.

Awesome views await those who tackle this route, as well. In fact, one might notice the distant Ozarks lurking beyond the river valley on a clear day.

The Will Apple's Road Trail makes its way along one of the first roads to reach the top of Mount Magazine. Wagons traveled this road during the 1800s, hauling produce from the ridgetop to the valley below.

The 1.6-mile journey is touted as easy and meanders within sight of home sites and stone fences. It also makes its way within eyeshot of the Buckman Swimming pool, which was built in the 1920s. Mountain biking enthusiasts are welcomed to tackle this particular route.

Speaking of the top of the mountain, the Signal Hill Trail leads hikers to the highest point in Arkansas, during its 1.4-mile jaunt. Those who are up to embarking upon this moderate hike will experience a variety of plant life prior to reaching the stone map of Arkansas at the trail's destination.

Now for the big boy. The Cove Lake Trail begins at the Cameron Bluff Campground and descends more than 1,500 feet prior to reaching Cove Lake. The route stretches 9.5 miles and is considered as moderate to strenuous.

Only three-tenths of a mile of the route is on state park property, with the remainder of the path meandering through the Ozark National Forest. Those wishing to experience an overnighter along this path will be glad to know that camping is allowed in the national forest.

So what about those who are interested in an extended stay, yet they are not overly enthused about living out of a backpack? Well, it just so happens that the state park sports 18 designated campsites with full hookups. A dump station is also available. And who wouldn't appreciate a modern bath house with hot showers?

Of course, the state park also welcomes and caters to those who would rather spend the day amidst the wonders of nature and spend their nights in the comfort of their own homes. Picnic sites are available, as is a picnic pavilion.

The park and its staff are even mindful of those who prefer a more luxurious stay from home. The Lodge sports 60 guest rooms and amenities are aplenty. Those choosing to spend an overnighter at the lodge will be privy to an indoor pool, fitness center, a game room, and high-speed internet.

The restaurant lends to yet one more luxury, and the view from the structure is impressive, One can actually see the Petit Jean River Valley and Blue Mountain Lake Lurking in the distance.

Yep, Mount Magazine is a destination capable of providing fun for folks with an array of outdoor interests, And with the peak of fall foliage just around the corner, it is a destination where I am likely to return in the very near future.

To get to the state park from Hot Springs, take Highway 7 north for about 76 miles, to Dardanelle. Remain straight on Highway 22. Travel 29 miles and turn left onto South Subiaco Drive. Go 4.3 miles and take a left onto Highway 309. Go 13 miles and turn right onto Magazine Road. Travel a half-mile to the destination. 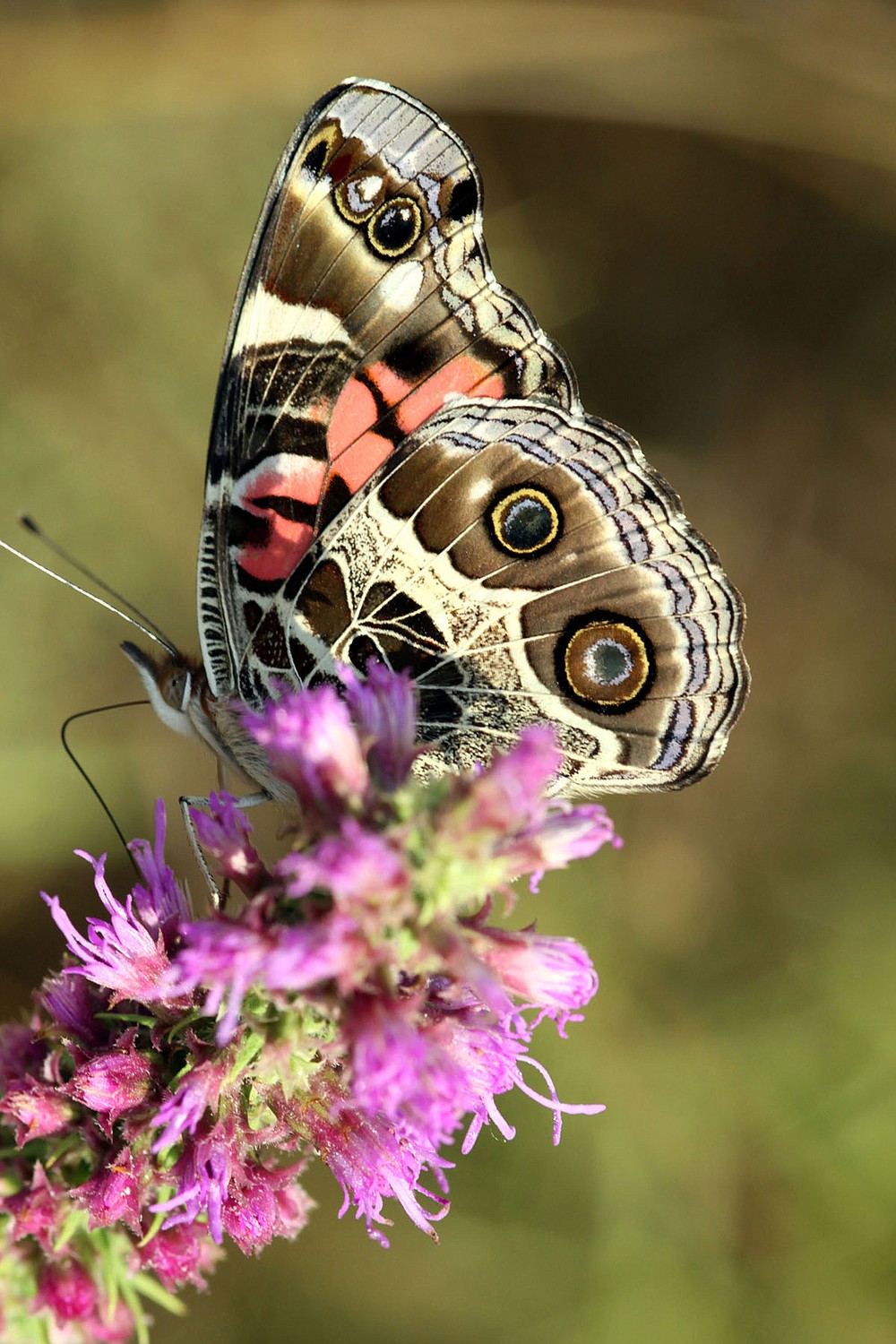 An array of native wildlife flourishes atop Mount Magazine, including butterflies. - Photo by Corbet Deary of The Sentinel-Record