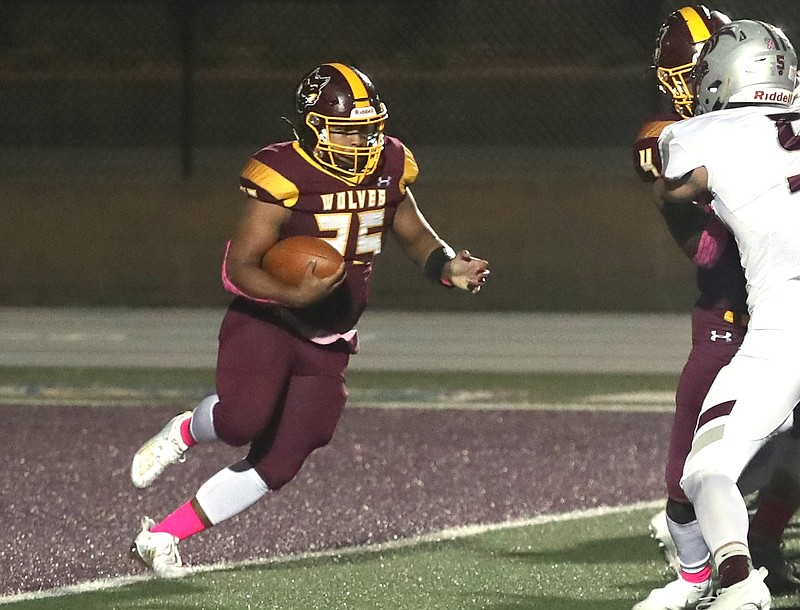 Lake Hamilton junior fullback Tevin Woodley (25) runs the ball during the first half of Friday's game against Siloam Springs at Wolf Stadium. Woodley led the Wolves on the ground with 191 yards. - Photo by Richard Rasmussen of The Sentinel-Record

PEARCY -- Siloam Springs lost three turnovers and had one interception in a game where Lake Hamilton scored on six of nine possessions, taking a 42-19 win over the visiting Panthers at Wolf Stadium Friday night.

Panthers head coach Brandon Craig said when a team turns the ball over that many times, mostly inside the 5-yard line, it is hard to recover.

"It's just one of those things that you can't do in high school football, especially against a good football team," he said. "They're very good football team. We knew that going in. So bottom line is we didn't play our best game, they did and they put a whipping on us."

Wolves head coach Tommy Gilleran said that the turnovers were key to the win.

From the outset, the Wolves (5-0, 3-0 6A-West) took control. On the first play from scrimmage, junior running back Owen Miller found a hole for a 51-yard breakaway touchdown.

Miller went on to score two more touchdowns in the half, including a 62-yard run that saw him break three tackles.

Gilleran was pleased with his team's overall performance in the game.

"I thought we finally played a complete game offensively," he said. "You know, I thought our kids blocked well, and we played well up front for the first time this year. And I think, you know, even defensively we played better."

Junior quarterback Hunter Talley dominated the field for the Panthers (3-4, 1-3), both passing and in the ground game, accounting for 329 of the team's 427 yards of offense.

"He's a kid that's a competitor, ultimate competitor for us," Craig said. "He's going to do anything to try to help us be successful, and I just love the kid."

"They put us in some one-on-one situations we knew we were going to be able to take advantage of if we could just protect," Craig said. "They don't stunt a lot, so we knew we're gonna be able to protect pretty solid and have some time, and that gives us some ability to throw the ball down the field. Plus their safeties were so far down to the box, you know, trying to stop our run game that we knew we were going to have some play action stuff over the top."

Gilleran said that senior quarterback Layne Warrick is expected to return for their Oct. 30 game at Benton after breaking his collarbone during the Wolves' benefit game against Arkadelphia on Aug. 17, but he is impressed with the way junior quarterback Grant Bearden has taken up the mantle.

"I thought Grant's done a really good job of running the offense," he said. "And, you know, even that one pass, they were holding our tight end. He got rid of it, which was a good deal. And so I was proud of him for making that play."