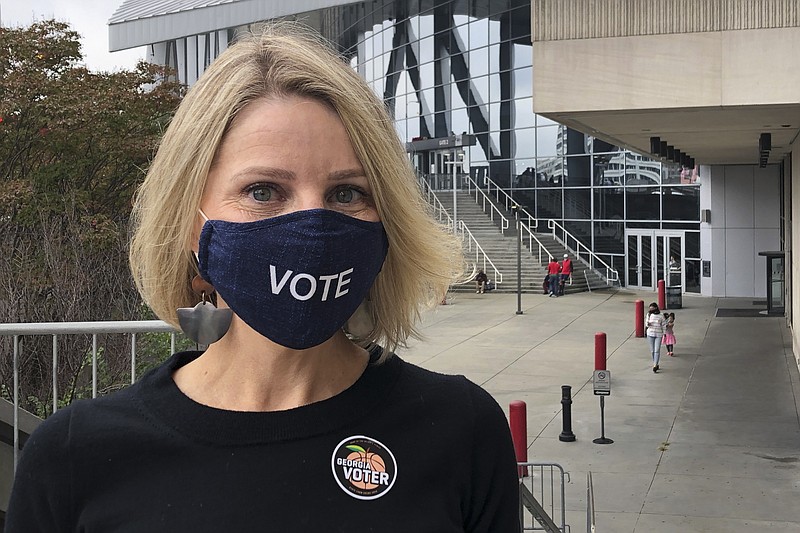 Jen Cox poses for a photo on Thursday, Oct. 15, 2020, after voting early at State Farm Arena in downtown Atlanta. The arena, where the NBA's Atlanta Hawks play, is one of many professional sports venues around the country that has opened its doors for voting or other election-related activities. With dozens of voting machines and ample space for social distancing, they provide a safe and efficient way to vote during the ongoing coronavirus pandemic. (AP Photo/Kate Brumback)

Featuring rows and rows of voting machines, ample space for social distancing and staff accustomed to large crowds, these mega voting sites are proving attractive to voters looking for the best way to cast their ballots amid the coronavirus pandemic.

"This was an amazing, fantastic experience," Jen Cox said after voting at State Farm Arena, home of the Atlanta Hawks. Other voters leaving the arena and posting on social media shared that sentiment.

The Hawks were the first NBA team to commit their arena for early voting. They contacted Fulton County officials in June after long lines plagued the state's primary election and protests over the killing of George Floyd by police in Minneapolis roiled the streets around the arena.

"In my mind, protests are great, but protests leading to action, leading to solutions and change is better," Hawks CEO Steve Koonin said.

Since then, 20 more NBA teams signed on to host voting or other election-related activities -- including voter registration and poll worker training -- in their arenas or practice facilities. Some of those commitments came after NBA players protesting racial injustice and police brutality halted the playoffs for three days in August, and the league agreed to a plan that includes encouraging voting this fall.

In a normal year, the NBA's regular season would be starting right about now. But the coronavirus outbreak that has altered voting procedures during the presidential election also has delayed the season and left arenas sitting empty. Opening them to voters seemed a natural fit.

"We're going to have thousands every day between now and Election Day voting in NBA arenas," said Kathy Behrens, the league's social responsibility and player programs president. "It feels good to be able to play such a vital role during this pandemic so people can vote safely and easily."

The NFL, NHL and MLB also are getting involved. Half the NFL's 32 teams are making their facilities available following offseason conversations commissioner Roger Goodell had with players about ways to leverage the league's power against social injustice.

Vivek Ranadivé, owner of the NBA's Sacramento Kings, was instrumental in a "Rally the Vote" effort bringing together dozens of professional sports teams to encourage participation. Voters will be able to register and cast ballots at the Kings' Golden 1 Center, blocks from California's Capitol, starting 11 days before the Nov. 3 election.

"I wanted to make voting as easy as ordering an Uber," he said.

After waiting five hours "in the heat and then the rain" to vote in Georgia's primary in June, Cox decided to vote early in the general election. Lines at polling places near her home in suburban Roswell were consistently long, so she drove 20 miles south to downtown Atlanta.

"I had heard great things about the way the Atlanta Hawks staff was running the arena, and it was by far the easiest and safest and best way I've voted since the pandemic began," she said.

There are 30 early voting locations scattered around Fulton County, which stretches 70 miles north to south. But with 60 check-in stations and 300 voting machines, the arena may be the best option for many, county elections director Rick Barron told reporters.

"Voters will probably save time by going to State Farm, driving from wherever they are," he said, while noting there is a transit station right next to the arena.

A glitch with the electronic pollbooks used to activate the cards that go into the voting machines caused a backup at the arena the day it opened, but it was cleared quickly and nearly 3,000 people voted there that day, Barron said.

Voters in Dallas have enthusiastically embraced the arena experience.

Dallas Mavericks owner Mark Cuban retweeted a message that said the American Airlines Center was "the coolest polling place I've ever voted in." Cuban added that there are 60 polling stations set up inside.

The next day, he tweeted a photo of voting machines in the arena's concourse, calling it "Democracy in action."

In Detroit, the training facility for the NBA's Pistons and Ford Field, where the NFL's Lions play, will provide socially distant spaces for receiving boards to double check ballots after they are counted at precincts. Pistons Vice Chairman Arn Tellem said helping with this year's election is important because the only way to bring about change is to vote.

Rep. Rashida Tlaib, whose district includes parts of Detroit, said it's appropriate for taxpayer-funded sports facilities to play this role.

"We did subsidize the building, so of course they should be using them for public good," Tlaib said.

Florida has early voting at venues used by the NBA's Orlando Magic, the NHL's Tampa Bay Lightning and the NFL's Tampa Bay Buccaneers.

When he went to vote on Monday, Anton Versch, 30, said he was surprised to see Magic coach Steve Clifford assisting poll workers inside the Amway Center. There were no lines and voters were in and out quickly.

"I felt like I was a player. I just had to make the right decisions," Versch said.

Not every team request was approved. Miami-Dade County rejected an offer from the Miami Heat, saying they wanted only sites that can be used in the future and, in most years, the NBA and early voting seasons overlap.

In Milwaukee, election officials scrapped plans to use the Bucks basketball and Brewers baseball stadiums as early voting locations, citing concerns about legal challenges, since they would have been designated later than required by state law.

The pandemic has created a new need for socially distanced voting locations, as well as a unique opportunity with venues idled after games and other events were canceled. But Behrens said the NBA plans to continue promoting voting once it's over.

"We don't think there's anything more American than encouraging people to participate in the process," she said. 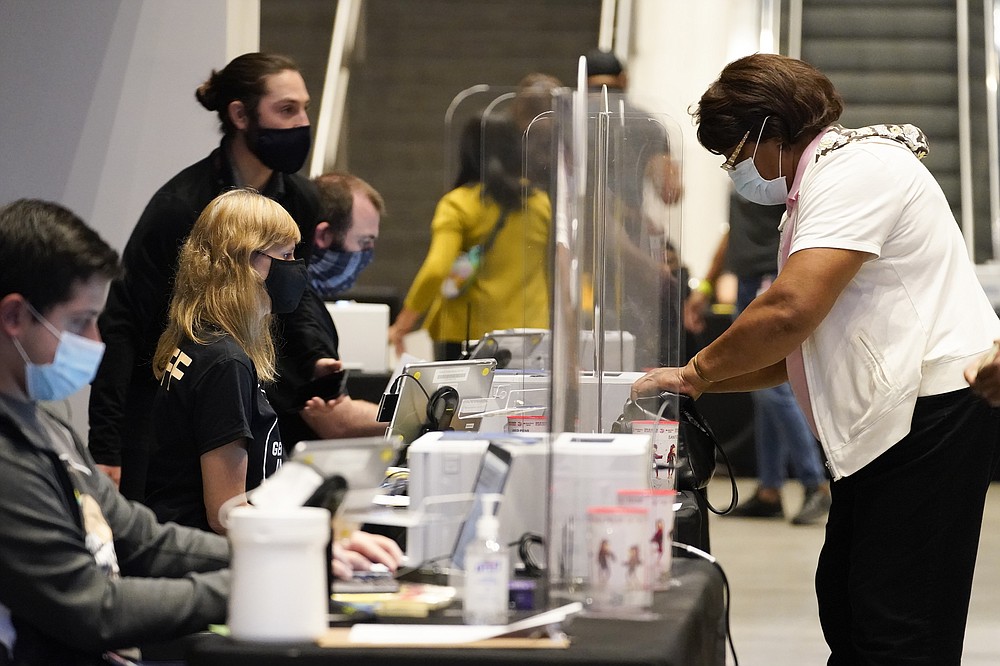 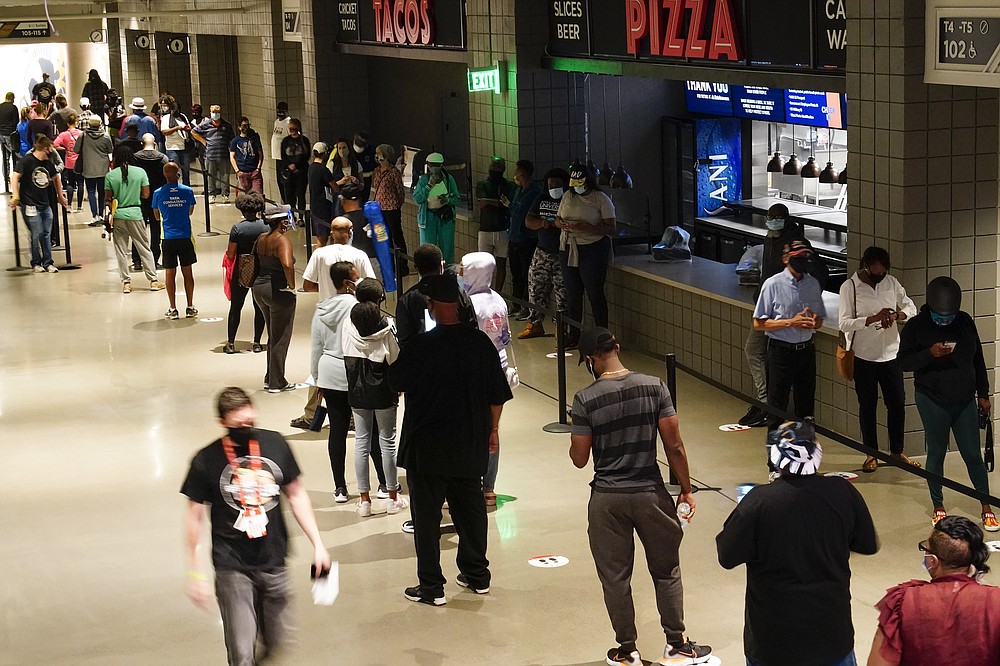 People wait in line to vote early at the State Farm Arena on Monday, Oct. 12, 2020, in Atlanta. (AP Photo/Brynn Anderson) 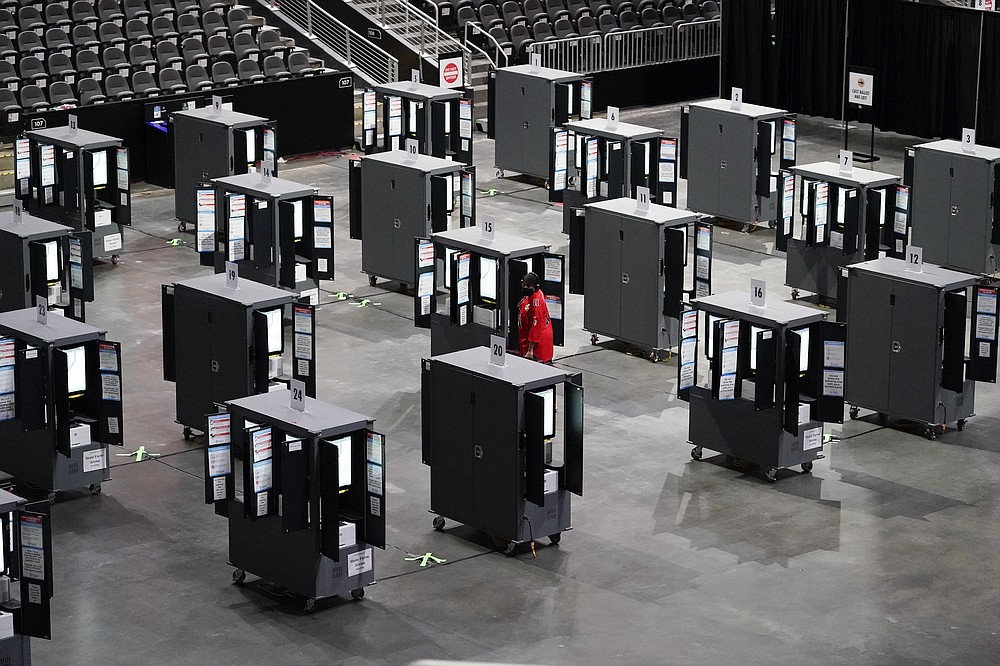 A man tries to vote early but can't because the machines stopped working during early voting at the State Farm Arena on Monday, Oct. 12, 2020, in Atlanta. (AP Photo/Brynn Anderson) 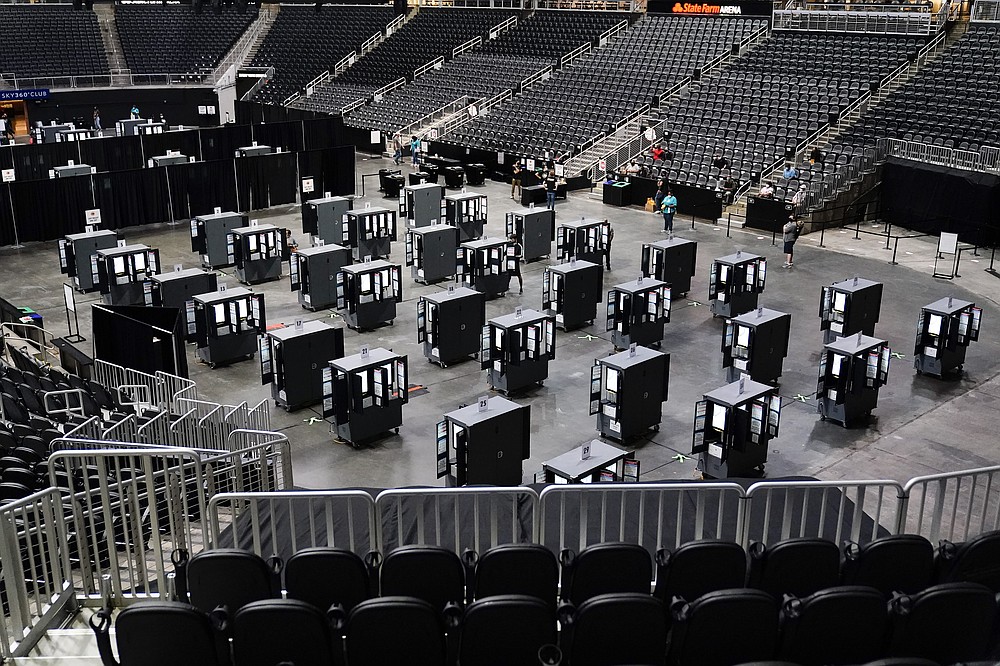 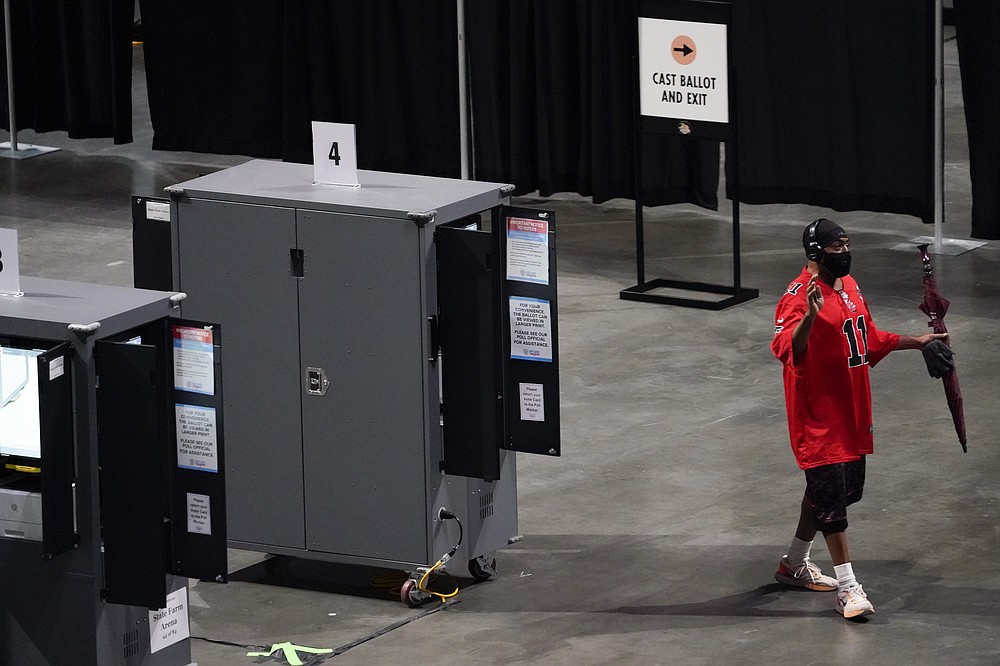 A man tries to vote but walks away after the machine stopped working during early voting at the State Farm Arena on Monday, Oct. 12, 2020, in Atlanta. (AP Photo/Brynn Anderson) 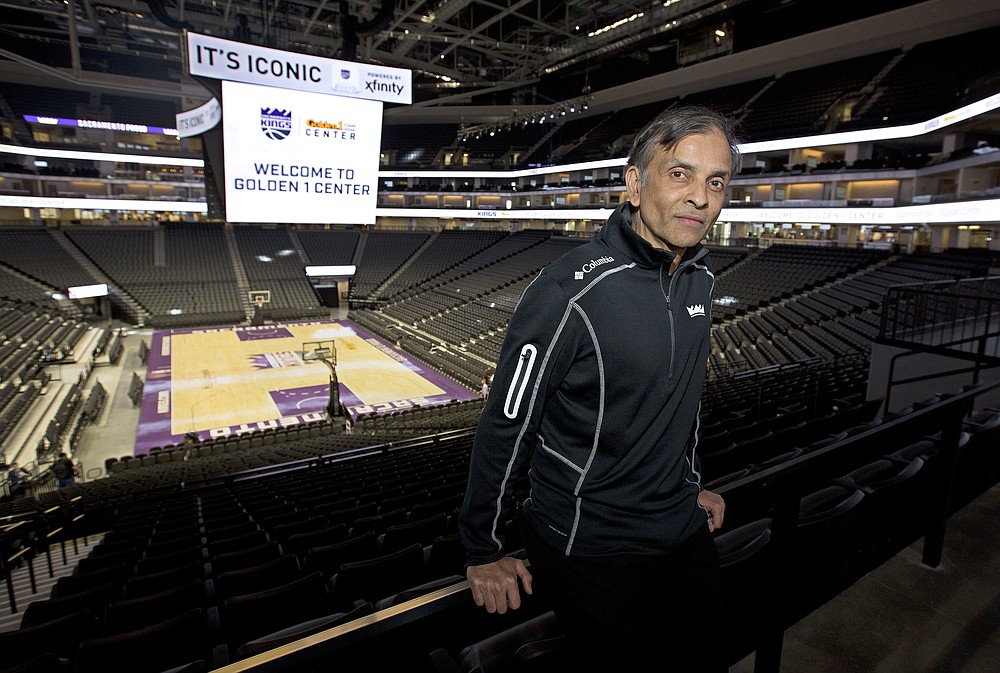 FILE - In this Sept. 27, 2016, file photo, Vivek Ranadive, the majority owner of the Sacramento Kings, poses in the new Golden 1 Center in Sacramento, Calif. Golden 1 Center will be among the places Californians in the area can vote from Saturday until the polls close on the evening of Nov. 3. “There’s no better way to make the world a better place than by making it easy for people to vote," Ranadive said in a telephone interview with The Associated Press. (AP Photo/Rich Pedroncelli, File) 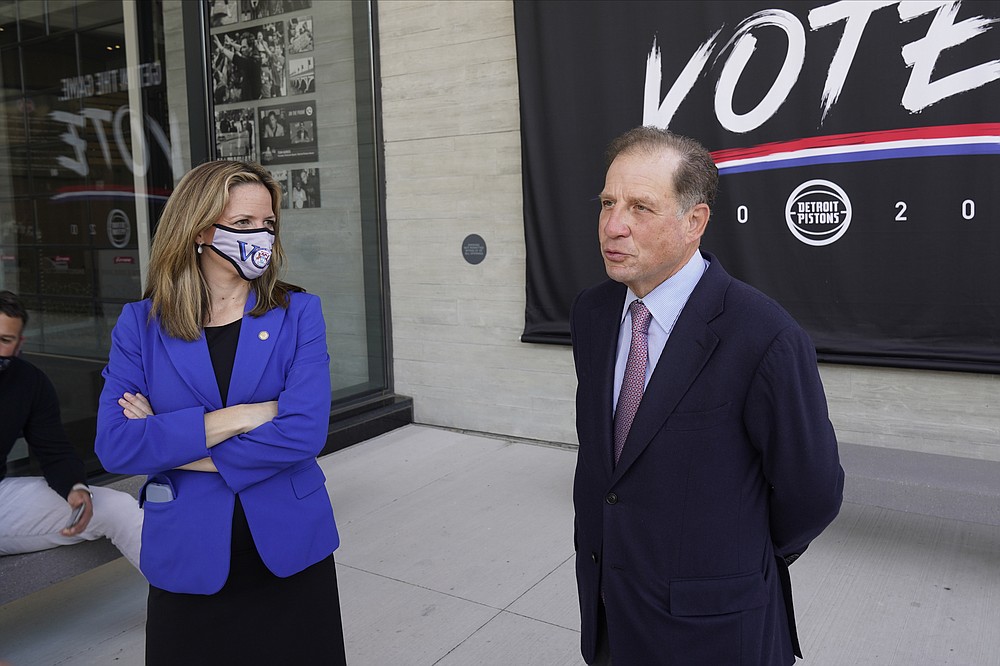 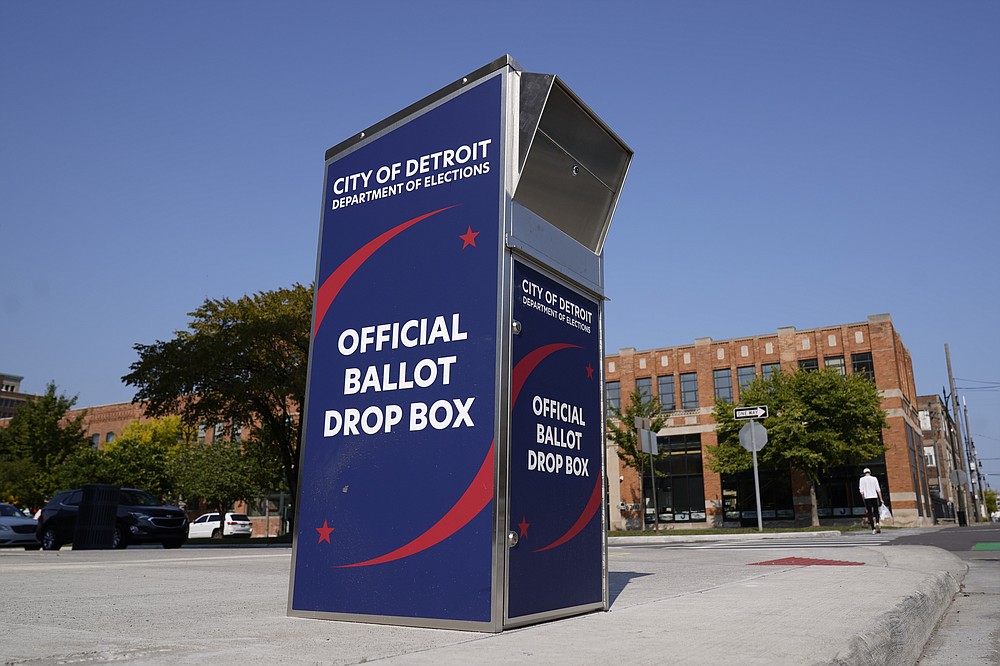 FILE - In this Thursday, Sept. 24, 2020, file photo, a ballot drop box is shown where voters can drop off absentee ballots instead of using the mail outside the Detroit Pistons training facility in Detroit. NFL, NBA, NHL, Major League Baseball and college venues are serving various roles in unprecedented ways, including providing space for people to vote while social distancing on Election Day. (AP Photo/Paul Sancya, File) 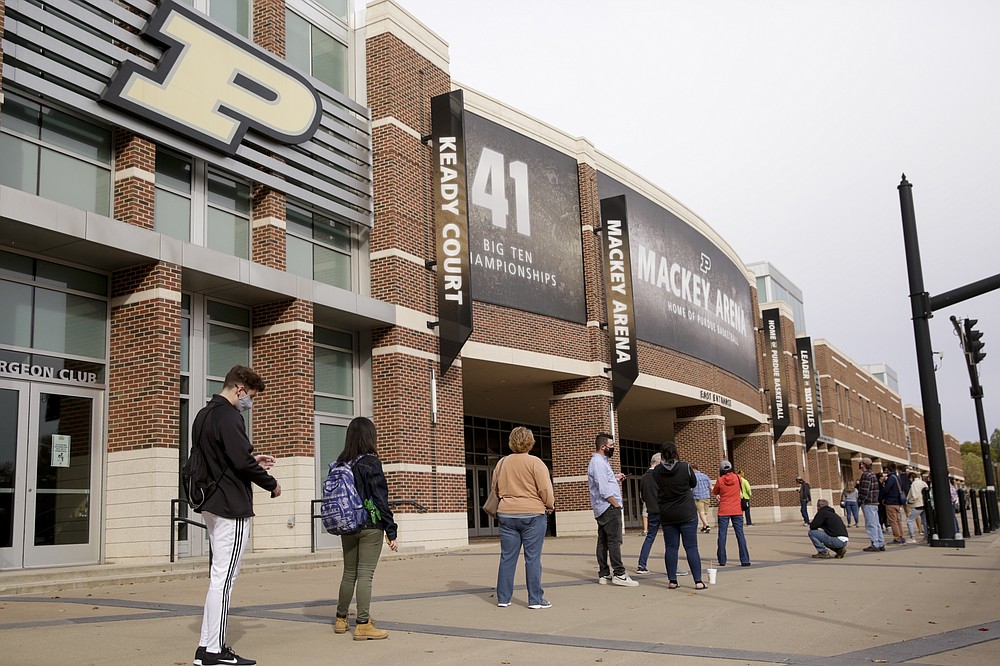