Many thorny global situations hinge on US election outcome 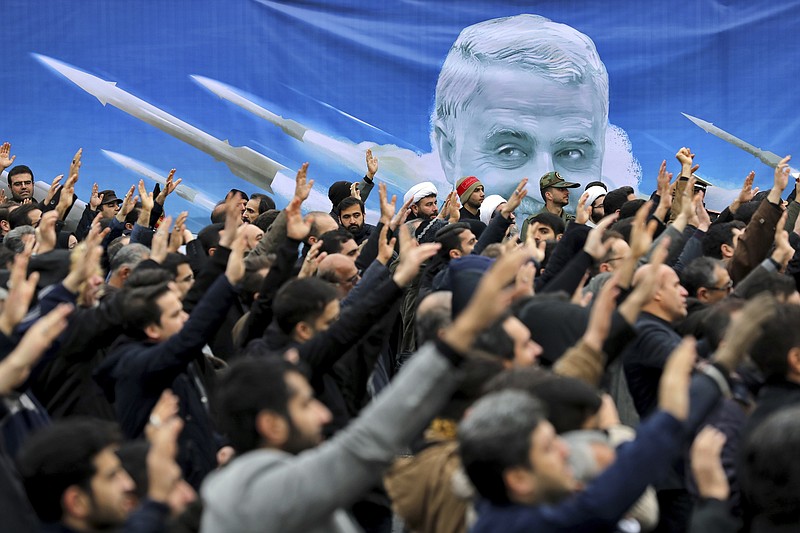 FILE- In this Jan. 4, 2020 file photo, protesters demonstrate over the U.S. airstrike in Iraq that killed Iranian Revolutionary Guard Gen. Qassem Soleimani in Tehran, Iran. Whether it's framed as American exceptionalism, American interventionism, American global standing, or a lack of it, how the world's foremost superpower moves forward following the presidential election will have a sizeable impact in various geopolitical pressure points and in the time of the pandemic. (AP Photo/Ebrahim Noroozi, File)

LONDON -- Four years after Donald Trump's election reframed how many nations interacted with the United States, the way that the world's foremost superpower moves forward after its presidential election stands to impact many geopolitical pressure points -- whether the victor turns out to be Trump or his Democratic challenger, former Vice President Joe Biden.

From Iran to Cuba, from China to Israel, American involvement and influence on the international stage has evolved sharply since Trump took office in 2017. He swept away agreements with some nations, alienated longstanding allies and pulled out of multilateral obligations that he said didn't serve the interests of the United States.

Though the international community has sometimes criticized Trump's "America First″ tenure, underscored by the president's approach to the coronavirus pandemic, there were already places, issues and conflicts where the United States' involvement wasn't always appreciated -- under his predecessor, Barack Obama and other recent American leaders.

Before the pandemic struck, in the beginning of 2020, the most serious global concern was whether Washington and Tehran were on the cusp of a ruinous war that would inflame the Middle East. While that has ebbed, many around the world are watching closely to see what happens next -- and who will be living in the White House three months from today.

Here's a look at some key issues whose direction will be, in part, steered by who wins the U.S. presidency.

The Nobel Peace Prize, won by Obama while in office, was something Trump had hankered for himself. But the honor went this month to the U.N. World Food Program. It was a resounding endorsement of a multilateral effort -- the United Nations' main message -- during a pandemic that has caused serious food insecurity as it engulfs the world.

"We are sending a signal to this type of nationalism where the responsibility for global affairs is not being faced," Nobel committee head Berit Reiss-Andersen said.

In the pandemic era, Trump has lambasted the World Health Organization and largely rejected multilateralism, as have likeminded leaders such as Brazil's Jair Bolsonaro and Britain's Boris Johnson, who, like Trump, both downplayed the coronavirus and were infected by it themselves.

With the United States still in the virus' vise and more than 220,000 dead, a rebound hitting Europe and sustained infections in India, Iran and beyond, these remain precarious days. Containing the virus, making a vaccine available and the international coordination around it -- with the United States as a major player -- will be central to whether the world can see a light at the end of a dark tunnel.

BATTLE OF THE SUPERPOWERS

The resurgence of Russia and the rise of China has ended a post-Cold War period in which Washington was the sole superpower.

Trump has made efforts to maintain relations with Vladimir Putin's Russia despite his own intelligence agencies' confirmation of Moscow's interference in the 2016 U.S. presidential election, which sought to aid him, and allegations that Russia secretly offered bounties for American deaths in Afghanistan.

Biden has said that he is putting Russia and other foreign governments "on notice" that he would act aggressively as president to counter any interference in U.S. elections.

China has become a focus of Trump's criticism in recent months. He has imposed punitive tariffs, made racist comments about the origins of the virus in Wuhan and taken action over cybersecurity issues. But whether Trump or Biden is in office for the next four years, Washington's relations with Beijing seem set to continue their thorniness as China increasingly flexes internationally.

Trump has made a point of moving away from the Obama administration's and world powers' Iran nuclear pact. He called it the "worst deal ever" and withdrew, which delighted Israel and Saudi Arabia but dismayed others. Then the U.S. killed Iran's most senior military figure, Gen. Qassem Soleimani, in Baghdad. Iran responded with a ballistic missile strike on Iraqi bases housing American troops.

The administration's decision to blacklist Iran's financial sector, part of wide-ranging sanctions, signals the American direction during a second Trump term. Biden, who was vice president to the more multilateral Obama, could re-engage with allies who have actively opposed Trump's policy, and potentially with Iran itself.

When it comes to the Israeli-Palestinian conflict, Trump's self-proclaimed "deal of the century" did not sit well for the Palestinians when it was released earlier this year. It effectively green-lighted Israeli annexation in the occupied West Bank, ending notions of the two-state solution and upending decades of official U.S. policy with regards to settlements. Because of this, Israeli Prime Minister Benjamin Netanyahu is one leader who will be watching these elections closely.

Under Trump, U.S. relations with the European Union and NATO have also hit significant bumps. Many Europeans and their governments remain deeply wedded to such multilateral blocs. Biden, heir to a foreign policy tradition more in line with other U.S. leaders since World War II, has said he would take a more conciliatory approach to longtime allies.

Trump had hoped his jaw-dropping outreach to North Korea's Kim Jong Un would be his signature foreign policy legacy. But the summits were huge on spectacle and produced no tangible results while giving Kim some of the status he craved. Little public attention has been given to the effort in recent months, and if previous policy is any indication, Biden would not court further summits.

Trump has bemoaned America's "endless wars″ and vowed to end them. But the U.S. military was blindsided by his latest claim that all U.S. troops will be out of Afghanistan by the end of the year.

Trump's comments unsettled the U.S. military and diplomats, some of whom say that putting a definitive date on troop withdrawal could impede a peace deal between the Taliban and the Afghan government. Biden says troops must be withdrawn responsibly and that a residual force should remain to combat extremism.

Trump has also demanded U.S. troops are pulled out of ally Germany, where they have been based for decades, pushing the Pentagon into a plan that will cost billions of dollars and take years to complete. A U.S. troop cut in South Korea has also been floated. Trump has criticized allies who he says are not contributing as much as the United States.

Little indicates that Biden would see things the same way. 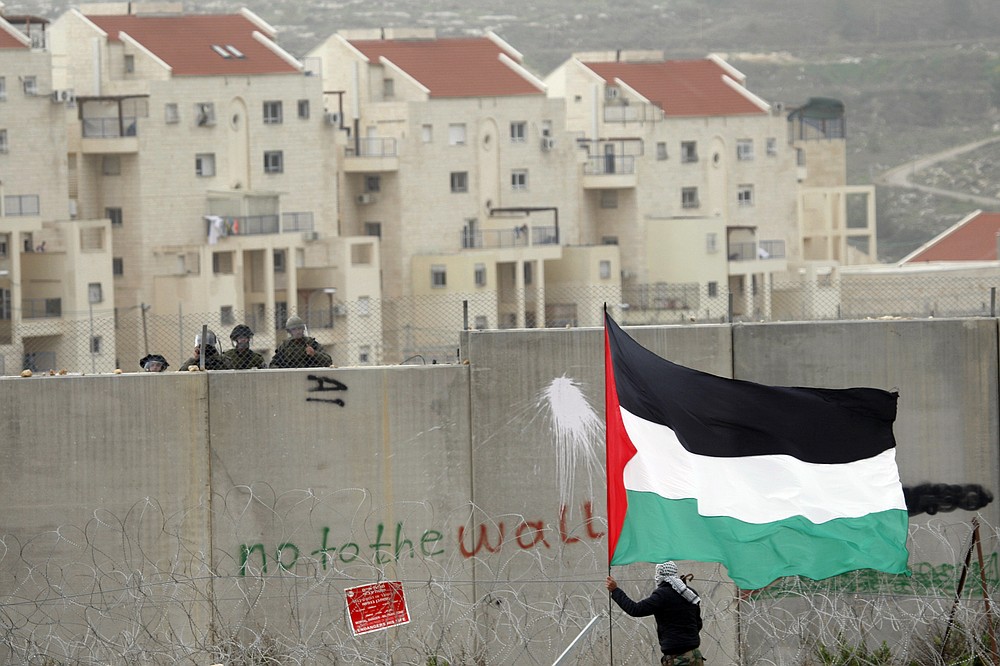 FILE- In this Friday, Feb. 17, 2012 file photo, the West Bank Jewish settlement of Modiin Illit rises in the background while a protestor waves a Palestinian flag in front of Israeli troops during a protest against Israel's separation barrier in the West Bank village of Bilin. Trump's self-proclaimed ‘’deal of the century' was anything but for the Palestinians' when it was released earlier this year, effectively greenlighting Israeli annexation in the occupied West Bank, killing off the two-state solution in an already moribund peace process and upending decades of official U.S. policy with regards settlements.(AP Photo/Majdi Mohammed, File) 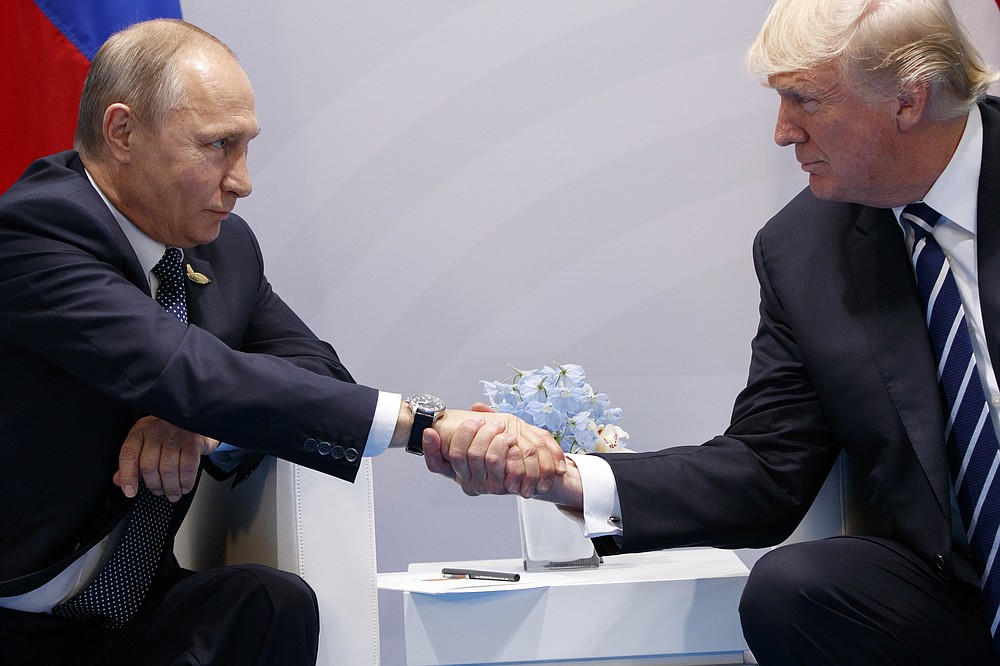 FILE - In this July 7, 2017, file photo, President Donald Trump shakes hands with Russian President Vladimir Putin at the G20 Summit in Hamburg. Trump has strenuously sought to keep an entente cordiale, an informal alliance of sorts, with Putin. This in the face of his own intelligence agencies' confirmation of Moscow's interference in the 2016 election, which sought to aid him, and Moscow secretly offering bounties to the Taliban for the deaths of Americans in Afghanistan. (AP Photo/Evan Vucci, File) 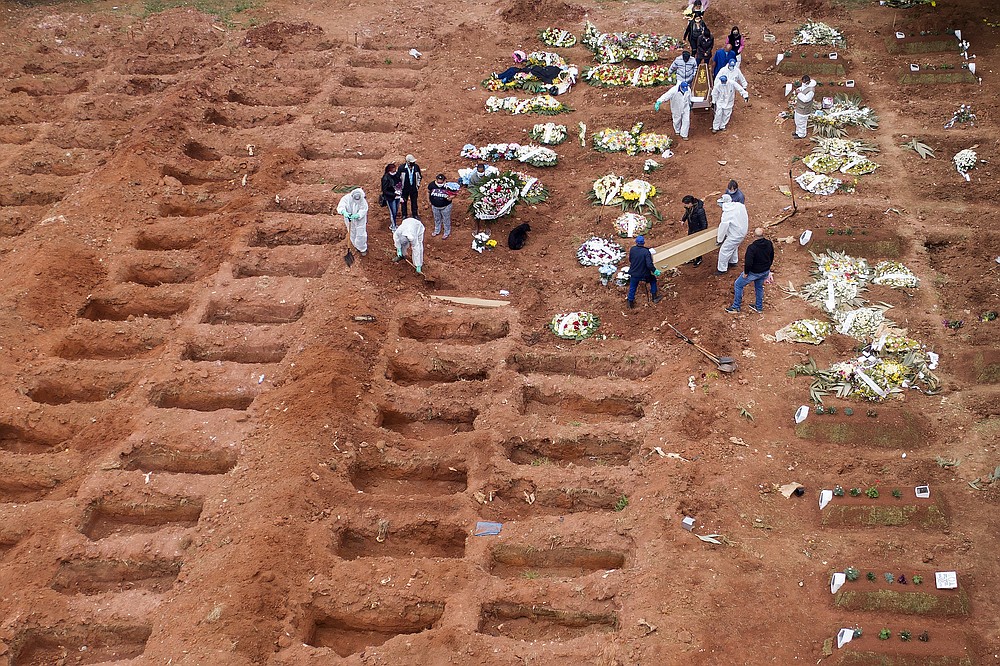 FILE - In this July 15, 2020, file photo, cemetery workers in protective clothing bury three victims of COVID-19 at the Vila Formosa cemetery in Sao Paulo, Brazil. Not just President Donald Trump, who has lambasted the World Health Organization, but the likes of his political bedfellows who have also underplayed the coronavirus and themselves also been infected by it: Brazil's Jair Bolsonaro and Britain's Boris Johnson. (AP Photo/Andre Penner, File) 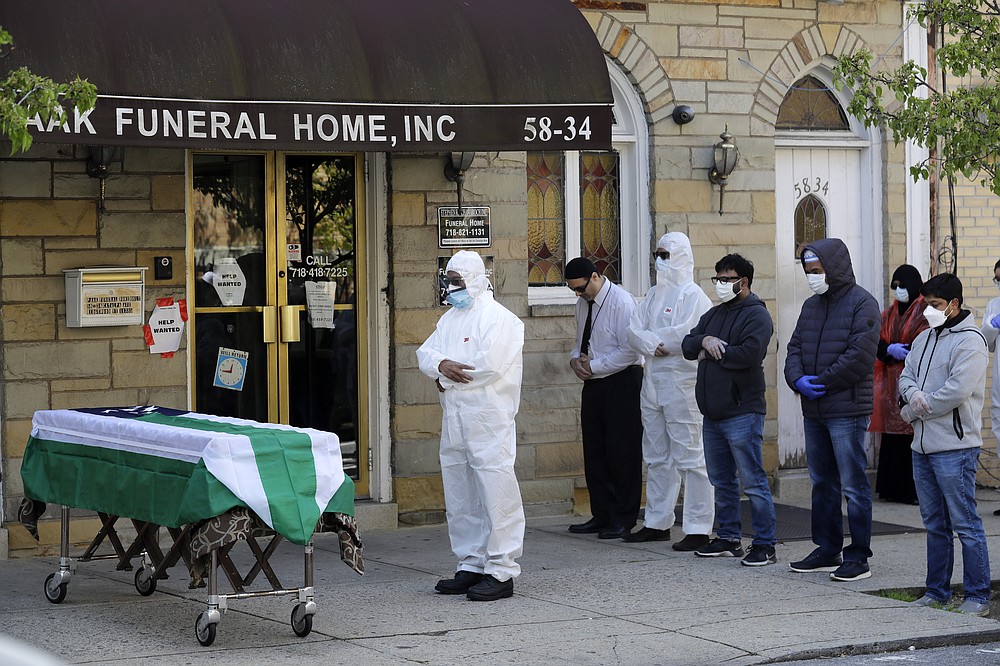 FILE - In this April 22, 2020, file photo, mourners pray as the remains of Traffic Section Commander Mohammed Chowdhury are brought out of the funeral home during his funeral in New York. Chowdhury died on April 19, 2020, from complications related to the coronavirus. Whether it's framed as American exceptionalism, American interventionism, American global standing, or a lack of it, how the world's foremost superpower moves forward following the presidential election will have a sizeable impact in various geopolitical pressure points and in the time of the pandemic. (AP Photo/Seth Wenig, File) 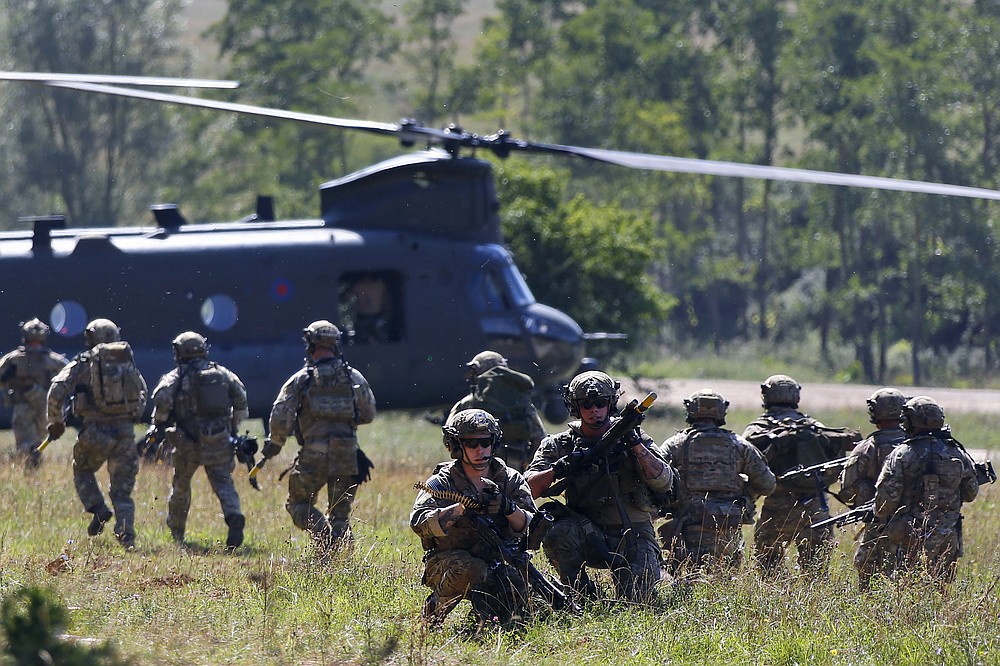 FILE - In this Aug. 26, 2015, file photo, soldiers take part in an exercise of the U.S. Army Global Response Force in Hohenfels, Germany. There will be leaders and populations who shudder at the thought of four more years of the Donald Trump administration and those whose consternation is tied to his potential defeat, and a U.S. government led by a President Joe Biden. Trump has demanded U.S. troops are pulled out of ally Germany, where they have been based for decades, prompting the Pentagon into a plan that will cost billions of dollars and take years to complete. (AP Photo/Matthias Schrader, File) 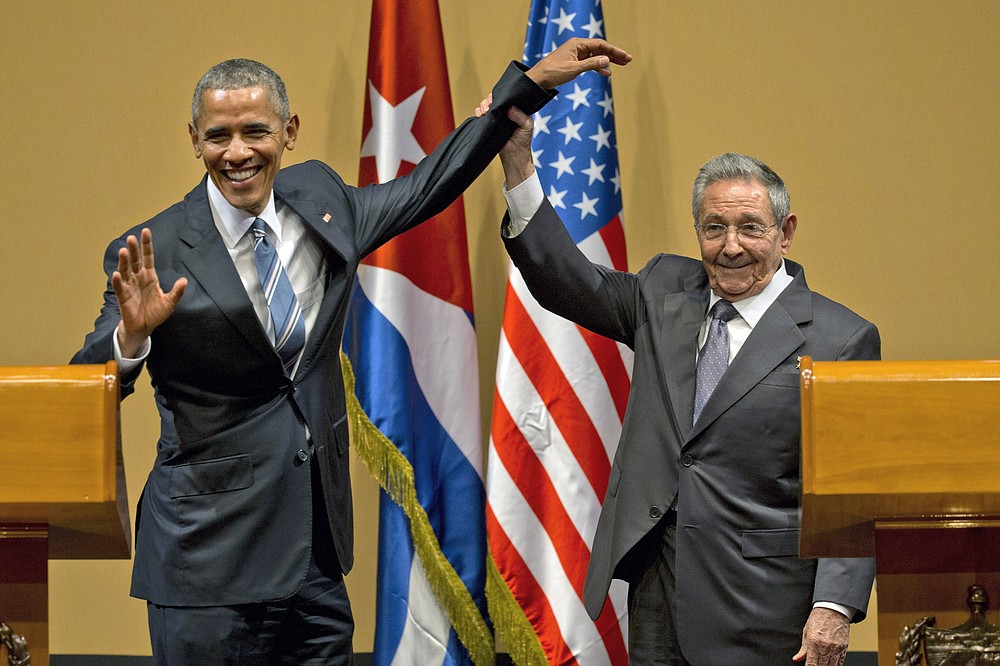 FILE - In this March 21, 2016, file photo, Cuban President Raul Castro, right, lifts up the arm of President Barack Obama at the conclusion of their joint news conference at the Palace of the Revolution in Havana, Cuba. Obama's handling of the Syrian civil war was widely perceived as a major foreign policy failure. That stood alongside substantial foreign policy wins, including the Iran nuclear deal, which infuriated traditional U.S. allies Israel and Saudi Arabia, and normalization of relations with Cuba, both of which Trump made a priority to rip apart. (AP Photo/Ramon Espinosa, File) 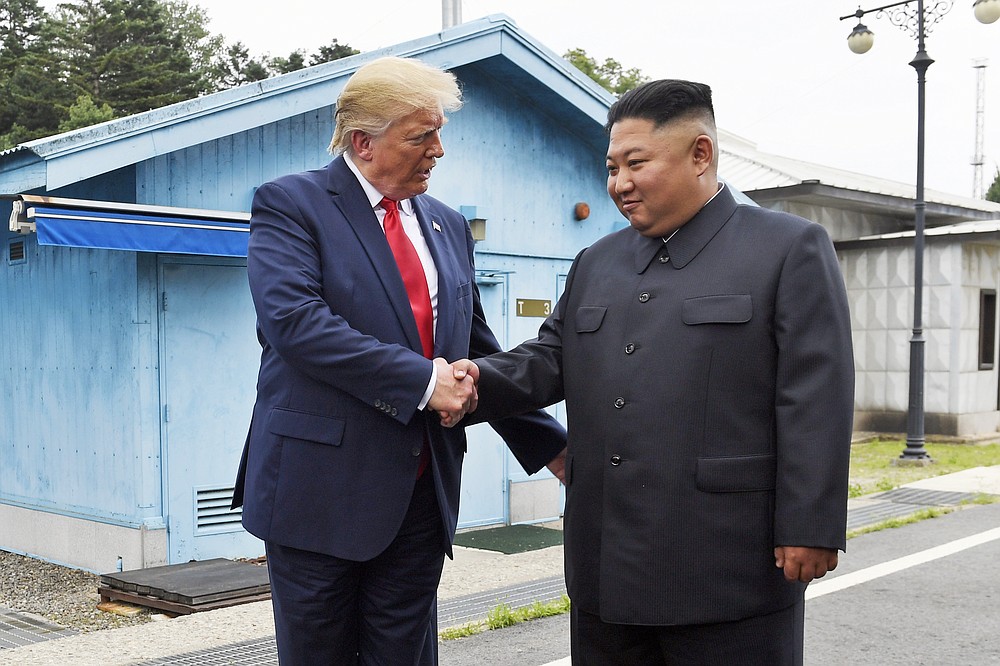 FILE - In this June 30, 2019, file photo, President Donald Trump shakes hands with North Korean leader Kim Jong Un at the border village of Panmunjom in the Demilitarized Zone, South Korea. There will be leaders and populations who shudder at the thought of four more years of the Donald Trump administration and those whose consternation is tied to his potential defeat, and a U.S. government led by a President Joe Biden. Trump had hoped his jaw dropping outreach to North Korea's Kim Jong Un would be his signature foreign policy legacy. (AP Photo/Susan Walsh, File) 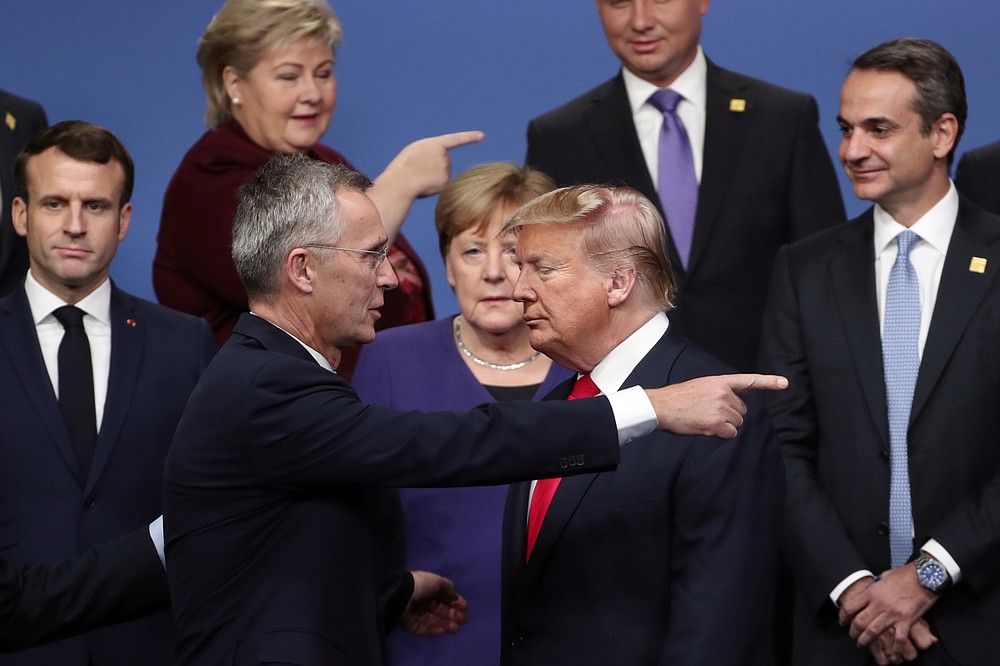 FILE - In this Dec. 4, 2019, file photo, NATO Secretary General Jens Stoltenberg, front left, speaks with U.S. President Donald Trump, front right, after a group photo at a NATO leaders meeting at The Grove hotel and resort in Watford, Hertfordshire, England. There will be leaders and populations who shudder at the thought of four more years of the Donald Trump administration and those whose consternation is tied to his potential defeat, and a U.S. government led by a President Joe Biden. (AP Photo/Francisco Seco, File) 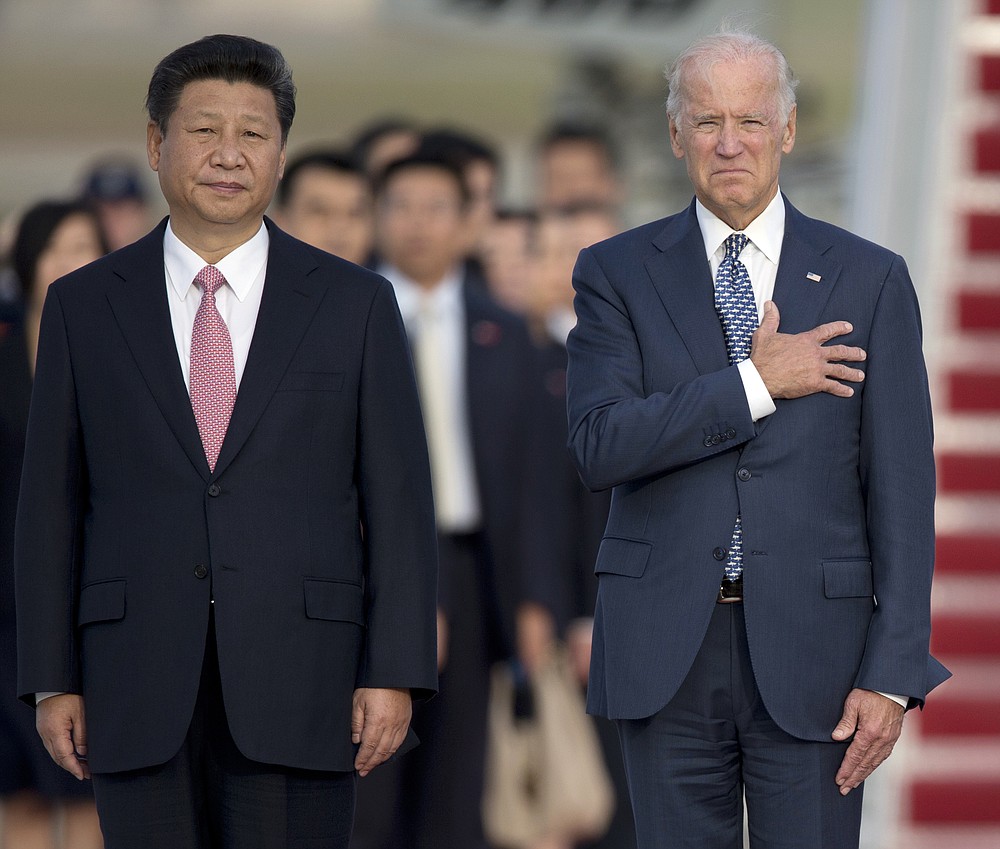