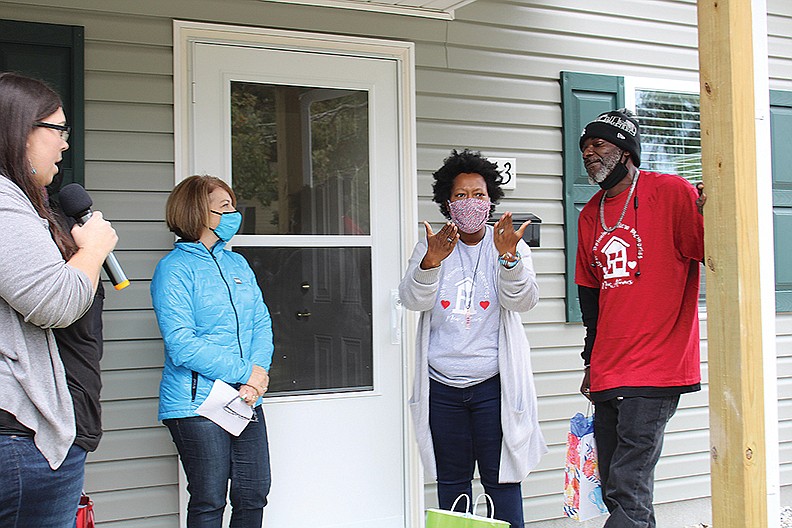 APOSTLES BUILD: Kitsonia Hancock, through interpreter Melinda Ables, left, thanks Garland County Habitat for Humanity for her new home on Saturday as her husband, Carvant, and Habitat Executive Director Cindy Wagstaff look on. - Photo by Tanner Newton of The Sentinel-Record

Garland County Habitat for Humanity dedicated its 148th home on Saturday, which was also this year's Apostles Build.

Located at 112 Watt St., the home was built by Habitat with the help of 11 local churches for Kitsonia and Carvant Hancock and their four children.

"This is where area churches come together to build and fund a home," said Cindy Wagstaff, executive director of GCHFH. "This is one of the few opportunities available for the faith community where all denominations can work together to help a family."

Due to COVID-19, the build took longer than expected. "We were rocking along at a really good pace," Wagstaff said, until the pandemic caused them to slow down. She said that had there not been a pandemic, the home would have been finished either in late spring or early summer.

Jerry Jones, Habitat construction supervisor, said, "We had to shut down about three weeks." He said that once the roof, windows and doors were installed, they weren't allowed to touch it again until they were given the go ahead to restart work.

"It went good, it's a beautiful home," Jones said, looking at the finished house.

During a normal Apostles Build, the various churches help with the actual construction of the house. Once the pandemic hit, Wagstaff said that they had to restrict access to the job site. "It prevented our churches from playing as much a part," she said.

The Hancock family includes their children Amelia, Lashanti, Jakiya and K.G., three of whom Kitsonia said will live in the house with them. Kitsonia is deaf, and Wagstaff said that this is the third home Habitat has built for a deaf person. Wagstaff said that they made modifications to the home to accommodate her disability, such as installing smoke detectors in that flash as well as make noise.

Since this is the third home they have made for a deaf person, Wagstaff said that the Habitat workers "are slowly learning sign language," saying that this is "fun for us."

Wagstaff also expressed admiration for the Hancock family. "They've been one of the hardest working families we've had," she said, adding that the family ended their sweat equity early.

During the dedication, Habitat, the churches and various other local people and organizations gave the family gifts such as food, pans and blankets. In what Wagstaff described as "a first for me," the family gave a gift to Habitat during the ceremony.

Kitsonia Hancock gave Wagstaff a light-up glass block lamp that had "Habitat for Humanity" printed on it.

"I was stunned," Wagstaff said, calling it "just the sweetest thing." She said that the gift will be used in the Habitat office.

Carvant Hancock said that he appreciated all the people who helped in getting the family into the home. "It's a blessing to get this house. It shows a lot of good. Just have to keep faith in God and keep going," he said. He also thanked everyone who attended the dedication.

Calling the home "a gift from God," Kitsonia Hancock also told The Sentinel-Record that the house is a blessing. She also gave advice to others in similar situations: "Don't give up. You will make it. You will get a house. Stay patient. God's love and God's will; your blessing will come."

Wagstaff said that they tend to do Apostle Builds every other year, and that the next one will likely be held in 2022.