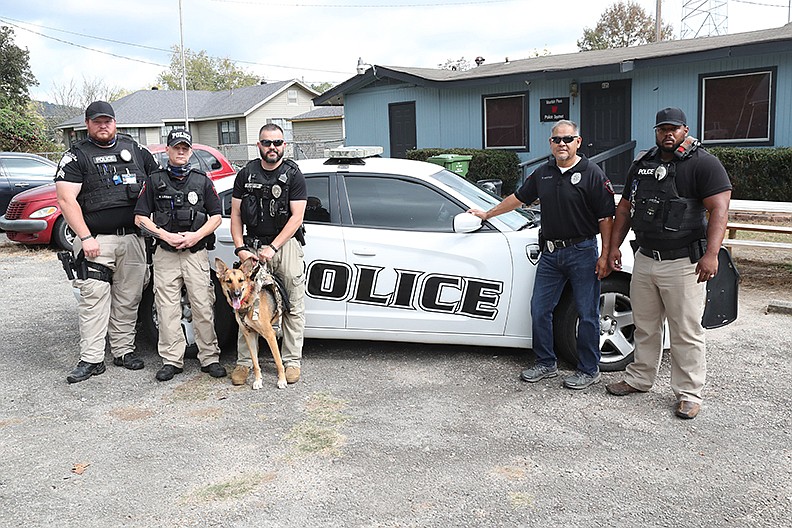 MOUNTAIN PINE -- As a candidate for Mountain Pine mayor, Morgan Wiles publicly criticized the Garland County Sheriff's Department for what he said was its indifference to the rural community of about 800 people in central Garland County.

The sheriff's department had become the former mill town's default law enforcement agency after the city disbanded its one-man police force in January 2017. Police Chief Chad King was unable to return to work following the gunshot wound he suffered responding to a call outside the corporate limits a year earlier.

Wiles told the Garland County Quorum Court in October 2018 that citizens' lack of faith in the sheriff's department convinced some to put themselves in harm's way rather than call 911 when volatile situations arose.

"When we asked them why they won't call the sheriff's office, the instantaneous statement made back to us is they never do anything," Wiles told the quorum court. "They shoot guns out there every night. There are arguments. There are fights. It's the Wild West out there.

"Someone can break into a car somewhere else and get arrested, but a woman can get beat in Mountain Pine and not even a report is written. An elderly person who shouldn't be in the middle of it is going to get hurt."

Two years later, calls the county's 911 communications center dispatched Mountain Pine police to are down. Wiles, now the city's mayor, said the lower call frequency is the public safety dividend paid by the reconstitution of the local police force in the spring of 2019.

Figures provided by the county's Office of Emergency Management, which oversees the county's 911 operations, showed calls for police service are down more than 20% compared to the first 10 months of last year. The numbers don't include calls from Mountain Pine that dispatchers sent sheriff's deputies to, or calls deputies made to dispatchers when they executed traffic stops in Mountain Pine.

There were 1,590 calls for Mountain Pine police, including calls city police made to dispatchers when executing traffic stops, through Oct. 20 of last year compared to 1,268 year to date.

OEM said calls for police service are down for every agency since the coronavirus pandemic began. But Mountain Pine Police Chief Miguel Hernandez said the close relationship officers have forged with the community has translated into fewer calls for service.

"People are trusting us more, and they're talking to us more," he said. "We're able to stop crime before it happens. That's the key to bringing crime down. If the community can't trust the police, nothing can be done."

Hernandez said serving as the Mountain Pine School District's resource officer has better attuned him and the department to the community's needs. The district formerly contracted the sheriff's department for its resource officer. The local police department stepped in at the start of the 2019-20 school year.

Income from the school resource contract helps fund the department. To reward what Wiles called the "leap of faith" the district took with the reconstituted department, the city lowered the district's water rate by 50%.

Hernandez said the city's trust in local law enforcement is also a product of the work the department has done in the community. It helped establish a food pantry, performed yard work and home maintenance for elderly and disabled residents and organized clothing and shoe drives for children.

"When we started going to full-time officers, and going to the academy, that's when we won the respect," Hernandez said. "But that really wasn't the key. The whole key to getting the respect of the citizens is we do a lot of community policing."

Hernandez said the department has four officers working full-time, three part-time and four reserve officers. The manpower doesn't allow for round-the-clock coverage, requiring the sheriff's department to respond to most calls for service made after 11 p.m.

"If we see crime is on the rise, we'll flip it," Hernandez said. "We'll work at night, especially on the weekends, from midnight to 7 o'clock in the morning."