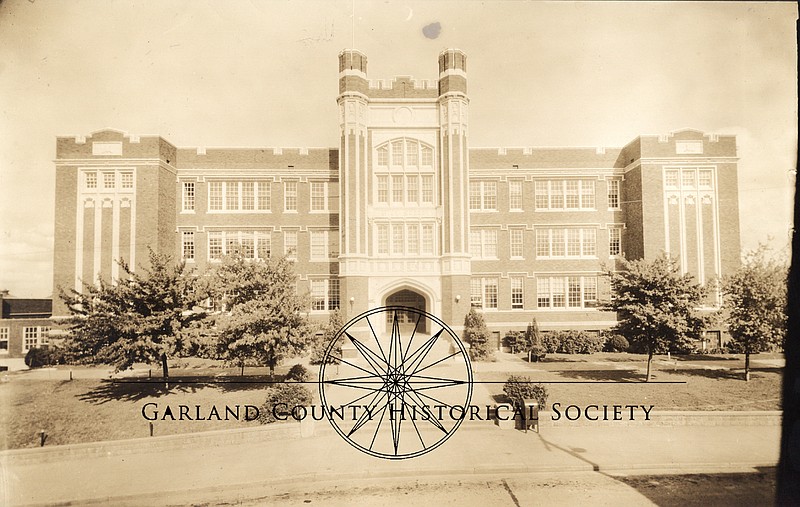 The first schools in the Hot Springs area were subscription schools, circa 1845, at Chalybeate Springs and at the lower end of Hot Springs Valley. These closed during the Civil War.

In 1869, the Hot Springs Institute advertised a 20-week course for $5 per month, with classes that included English, grammar, ancient and modern history, science, and philosophy. Around that time, the first school for African American children met in a brush arbor on the site of Roanoke Baptist Church on Whittington Avenue. Classes were taught three days a week by a Memphis minister who traveled weekly to Hot Springs. Two Freedmen’s schools for Black students were also holding classes in the late 1860s in the Hot Springs vicinity.

In 1876, subscription schools opened — the Cottage Street School, Crest Street School, and Mrs. Jones’ School (a one-room log building, fee $2 a month) on Hobson Avenue. In 1881, the Hot Springs Special School District organized. It set a 5-mill tax to raise operating funds and spent $4,346.30 in its first year. Principals received $60 a month and teachers, $50. The district had 389 pupils in classes that went through eighth grade.

The first graduation ceremony was held in the Opera House on Central Avenue in May 1886 for those who had completed eighth grade. The first high school diplomas were awarded the following year in a class of two — one was valedictorian and other was salutatorian.

The high school for white students that was built in 1908 on Oak Street was destroyed in the fire of 1913. A new building (with a large coal boiler that was built for use in a battleship) was erected for $164,000. Occupied until 1968, the building is now Hot Springs High School Lofts. The 1913 fire also destroyed Langston School, the Black high school on School Street. It was rebuilt on Silver Street and replaced in 1963 on the same site. Hot Springs High School moved to its current building on Emory Street in 1968, the year the high school was integrated.

HSHS’s first football team was organized in 1907, with the players buying their own equipment. HSHS Trojan games were played at Whittington Park before Rix Field was built in 1930, while the Langston Bulldogs used Majestic Field and then Sam Guinn Field. On these fields, fans cheered outstanding players like future U of A star Bud Canada and future Cleveland Brown and Washington Redskin Bobby Mitchell.

The Hot Springs School District has faced many challenges, such as a financial shortfall teachers helped meet in 1937 by selling jonquils outside Oaklawn Park. But it has overcome those challenges to become an outstanding district and a leading employer.

In 2016, Hot Springs voters passed a millage that allowed HSSD to construct two new buildings — Langston Elementary Leadership Academy and Hot Springs Junior Academy — and to upgrade and remodel almost every one of the district’s campuses.

Led by Superintendent Stephanie Nehus since 2017, the district has an enrollment of 3,579. Its staff of 466 is dedicated to its mission “to educate and empower each student to graduate from high school college and/or career ready, respect diversity, and to be contributing members of a global society.”