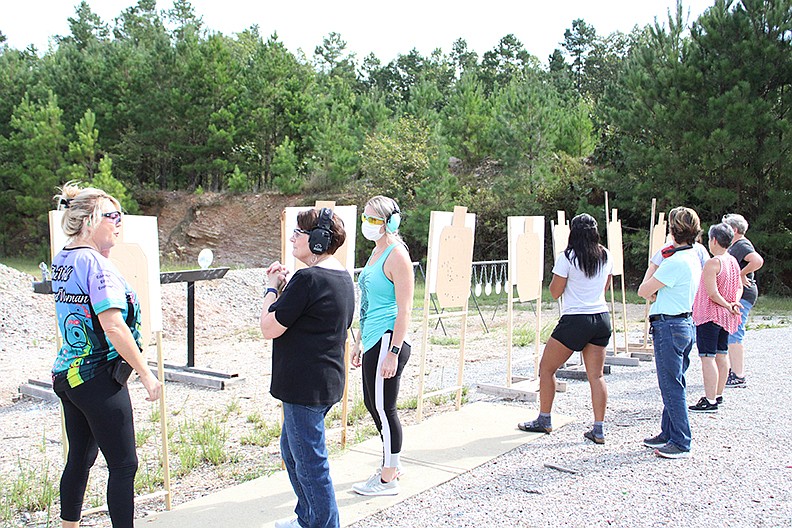 Instructor Staci Claunch, left, talks with a couple of participants taking the Women on Target class on Saturday morning. In this class, Claunch teaches women the basics of firearm shooting and safety. - Photo by Tanner Newton of The Sentinel-Record

A record number of more than 40 women attended a Women on Target beginner's class in firearms on Saturday at the Mountain Valley Sportsman's Association range.

The instructor, Staci Claunch, said it was held as part of the Southern Arkansas Chapter of The Well Armed Woman. She said that on the first Saturday of each month, she offers a beginner's course on how to properly use firearms.

Her husband, Cameron Claunch, said that these lessons tend to average around five participants.

The class started at 9 a.m. and went until 11. "This is the biggest (Woman on Target) we've had probably ever," Staci Claunch said. She said the increase in participants is likely "due to the pandemic, the rioting and defunding the police."

Claunch said class participants do not need to have any experience with firearms. She said that she teaches the "basic fundamentals of shooting" such as "stature, grip, target control, sight alignment, general safety, as well as how to clear malfunctions."

Claunch said that she was previously in the military, and served in both Iraq and Afghanistan. She started this chapter in 2017 after wanting to learn more about firearms. She would then get pass her instructors test and now teaches other women.

She said that this class is to "get these women over the fear of using a gun."

"I have a passion for helping women. I want them to be able to shoot, so that they feel protected," Claunch said.