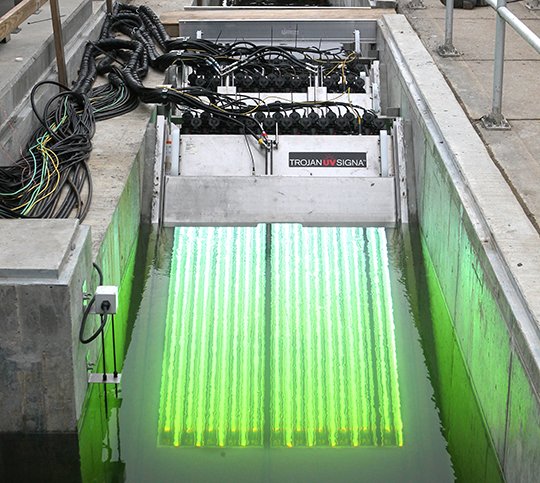 Ultraviolet lamps glow at the city’s Regional Wastewater Treatment Plant on Nov. 7, 2017. The lamps, which serve as the final step in the treatment process, replaced the chlorine disinfection system. - Photo by Richard Rasmussen of The Sentinel-Record

The Hot Springs Board of Directors will consider spending some of the $18 million in new debt it authorized in June for improvements to the Regional Wastewater Treatment Plant on Davidson Drive.

The resolution awarding a $2.45 million contract to Haren Construction Co. Inc. of Tennessee for a tertiary filtration system is on the consent agenda of tonight's business meeting at City Hall. The two cloth filters have a combined rating of 48 million gallons a day, or about four times the flow the plant treats on an average day.

They would be installed between the plant's secondary clarifiers and ultraviolet disinfection system that replaced the chlorine system in 2017. They would add another step to the treatment process when plant operators have to bypass heavy, rain-diluted flows around clarifiers and the aeration basin where biological processes that break down wastewater occur.

The cloth filters would help the plant stay within its permitted effluent limits by capturing material that would have been broken down by bacteria in the biological process. Flow would pass through the filters and go to the UV disinfection chamber that deactivates pathogens before flow reaches the plant's permitted outfall on upper Lake Catherine.

Running rain-diluted flow through the full treatment process flushes out bacteria that breaks down wastewater. Without the bacteria, the plant's effluent can exceed its permitted discharge limits. Regrowing the bacteria can take weeks.

This happened earlier this year after operators routed flow from the plant's equalization basin through the full treatment spectrum. Flow from the equalization basin, where wastewater is sometimes diverted and held before it enters the plant, is usually routed around the biological processes, but runoff entering the collection system during heavy rainfalls in late winter and early spring threatened to overtop the 70 million-gallon basin.

The bypass line's hydraulic capacity wasn't sufficient to lower the basin, so flow had to be routed through the main line that passes through the full treatment train.

The contract on tonight's consent agenda includes a 54-inch diameter line to carry flow to the filters and UV chamber. Crist Engineers, the city's wastewater system consultant, recommended the 54-inch line over a 36-inch line. The larger line added more than $500,000 to the contract, according to bid documents, but will save money when the city upgrades the plant's hydraulics

Hot Springs Utilities Director Monty Ledbetter said the 54-inch line will accommodate future plant improvements the city needs to bring the wastewater system into compliance with the consent administrative order it entered into with state regulators in 2008.

"We didn't want to put in a 36 and then turn around and ask to remove the 36 to put in the 54 to get the water hydraulics flow through the plant," Ledbetter said. "In order to meet our future needs, we need a 54. That's what we discovered in our master plan."

Installing new diffusers in the aeration basin, adding another secondary clarifier and a new discharge line are some of the improvements planned for the plant, Ledbetter said. They, and the tertiary filter system the board will consider tonight, would be financed by $18 million in new debt and $38 million in refinanced existing debt the board authorized in June.

Refinancing the existing debt allowed the new debt to be issued without raising wastewater rates, the city said. The $124 million in wastewater system debt, according to bond pricing sheets the city's financial adviser presented the board, is secured by the monthly debt service charge on city utility bills.

The city assesses a $17.21 monthly debt service charge for five-eighths inch meters inside the city and $23.97 for meters outside the city.

Haren Construction was the only company that bid on the filter project, according to information presented to the board.