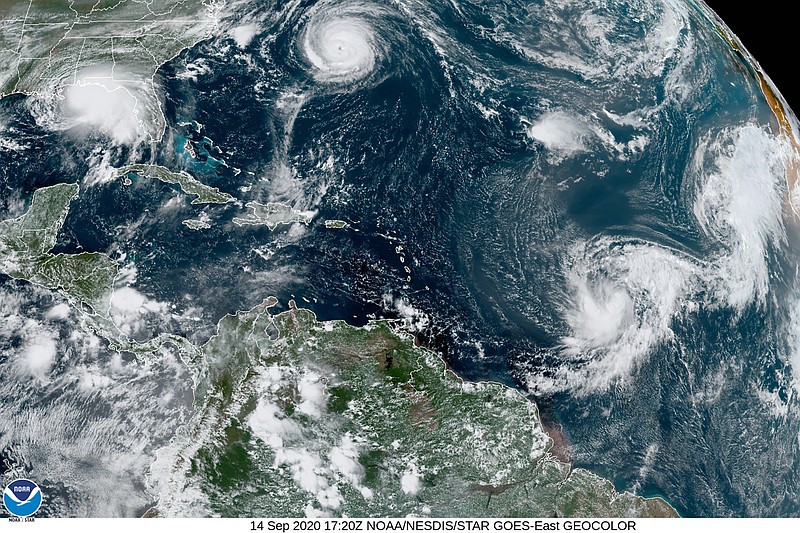 This satellite image provided by the NOAA shows five tropical cyclones churning in the Atlantic basin at 5:20 p.m. GMT on Monday, Sept. 14, 2020. The storms, from left, are Hurricane Sally over the Gulf of Mexico, Hurricane Paulette over Bermuda, the remnants of Tropical Storm Rene, and Tropical Storms Teddy and Vicky. (NOAA via AP)

WAVELAND, Miss. -- Hurricane Sally, one of a record-tying five storms churning simultaneously in the Atlantic, closed in on the Gulf Coast on Monday with rapidly strengthening winds of at least 100 mph (161 kph) and the potential for up to 2 feet (0.6 meters) of rain that could bring severe flooding.

The storm was on a track to brush by the southeastern tip of Louisiana and then blow ashore late Tuesday or early Wednesday near the Mississippi-Alabama state line for what could be a long, slow and ruinous drenching.

Storm-weary Gulf Coast residents rushed to buy bottled water and other supplies ahead of the hurricane, which powered up to a Category 2 in the afternoon. Forecasters said sustained winds could reach 110 mph (177 kph) by landfall.

"This is the real deal, and it deserves your attention," Mississippi Gov. Tate Reeves wrote on Twitter, shortly after the storm was upgraded. He urged people in low-lying areas to prepare to evacuate. "Be smart. Prepare for worst. Pray for the best," he said.

Seawater and sand swept onto roads on one end of Dauphin Island off the coast of Alabama, washing away several cars, Dauphin Island Mayor Jeff Collier said. He said about a dozen people had to be evacuated by Humvee.

To the west, in Mississippi, Jeremy Burke lifted things off the floor in case of flooding in his Bay Books bookstore in the Old Town neighborhood of Bay St. Louis, a popular weekend getaway from New Orleans, about 60 miles (95 kilometers) to the west.

"It's turning into a ghost town," he said.

Sally has lots of company during what has become one of the busiest hurricane seasons in history -- so busy that forecasters have almost run through the alphabet of names with 2 1/2 months still to go.

For only the second time on record, forecasters said, five tropical cyclones were swirling simultaneously in the Atlantic basin. The last time that happened was in 1971.

In addition to Sally were Hurricane Paulette, which passed over a well-fortified Bermuda on Monday and was expected to peel harmlessly out into the North Atlantic; and Tropical Storms Rene, Teddy and Vicky, all of them out at sea and unlikely to threaten land this week, if at all.

As of late afternoon, Sally was about 145 miles (230 kilometers) southeast of Biloxi, Mississippi, moving at 6 mph (9 kph). The hurricane's sluggish pace could give it more time to drench the Mississippi Delta with rain and storm surge.

The storm's forecast track was nudged east Monday afternoon but much of southeast Louisiana remained under a hurricane warning. Storm surge warnings stretched from Port Fourchon in Louisiana to the line between Okaloosa and Walton counties in Florida. Also included: lakes Pontchartrain, Maurepas and Borgne in the New Orleans area and Mobile Bay in Alabama.

In coastal Mississippi, water spilled onto roads, lawns and docks well before the storm's arrival.

The town of Kiln, Mississippi, where many homes sit high on stilts along the Jourdan River and its tributaries, was under a mandatory evacuation order, and it appeared most residents obeyed. Many of them moved their cars and boats to higher ground before clearing out.

Michael "Mac" Mclaughlin, a 72-year-old retiree who moved to Kiln a year ago, hooked his boat up to his pickup truck to take to his son's house in another part of Mississippi before heading to New Orleans to ride out Sally there with his girlfriend.

"It would be dumb to stay here," Mclaughlin said. He said his home was built in 2014 to withstand hurricanes, "but I just don't want to be here when the water's that deep and be stranded. That wouldn't be smart."

On Aug. 27, Hurricane Laura blow ashore in southwestern Louisiana along the Texas line, well west of New Orleans, tearing off roofs and leaving large parts of the city of Lake Charles uninhabitable. The storm was blamed for 32 deaths in the two states, the vast majority of them in Louisiana.

More than 2,000 evacuees from Hurricane Laura remain sheltered in Louisiana, most of them in New Orleans-area hotels, Gov. John Bel Edwards said.

The extraordinarily busy hurricane season -- like the catastrophic wildfire season on the West Coast -- has focused attention on the role of climate change.

In addition, scientists have been seeing tropical storms and hurricanes slow down once they hit the United States by about 17% since 1900, and that gives them the opportunity to unload more rain over one place, like 2017's Hurricane Harvey in Houston.

In Mississippi, Reeves said Sally could dump up to 20 inches (51 centimeters) of rain on the southern part of the state. Shelters opened, but officials urged people who are evacuating to stay with friends or relatives or in hotels, if possible, because of the coronavirus.

People in shelters will be required to wear masks and other protective equipment, authorities said.

"Planning for a Cat 1 or Cat 2 hurricane is always complicated," Reeves said. "Planning for it during 2020 and the life of COVID makes it even more challenging." 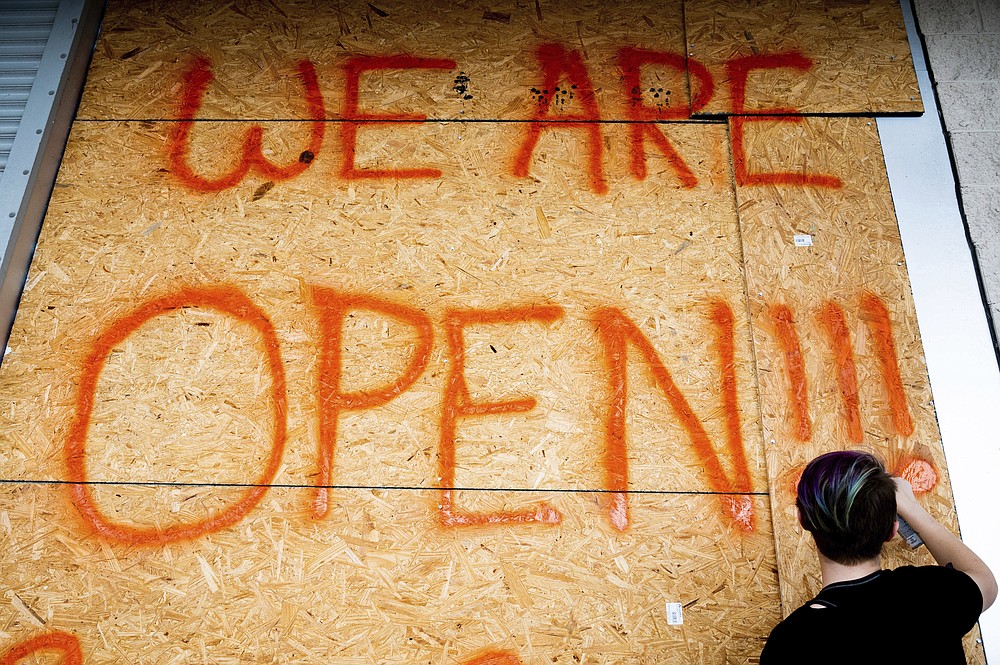 A Dirt Cheap store employee spray paints the day's business hours onto a board of plywood in anticipation of Hurricane Sally making landfall, in Bay St. Louis, Miss., on Monday, Sept. 14, 2020. Gulf coast residents are making last minute purchases as they prepare for the expected severe weather from the hurricane. (Lukas Flippo/The Sun Herald, via AP) 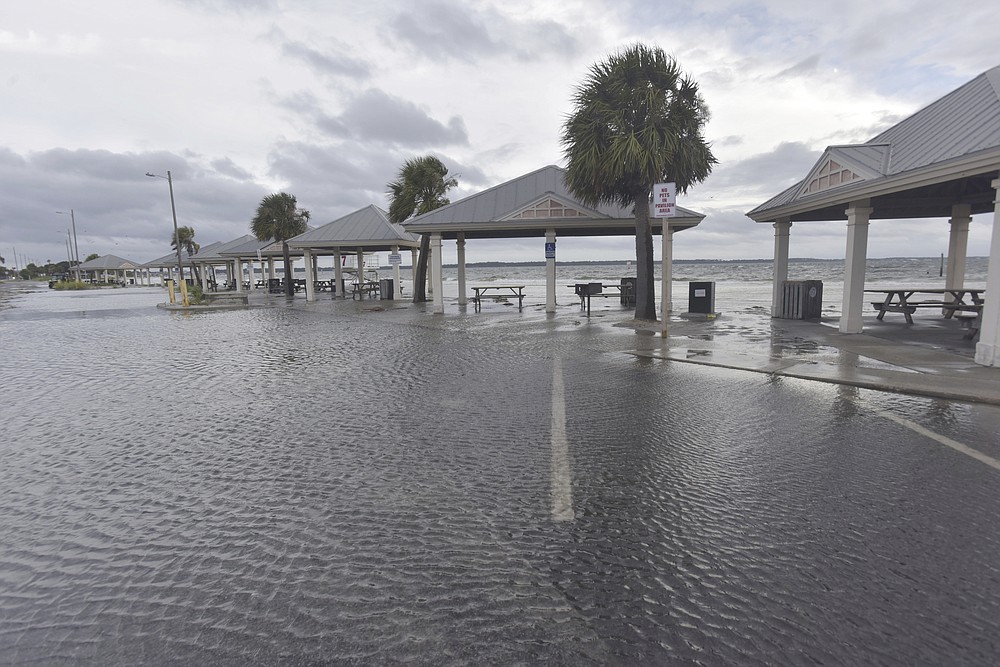 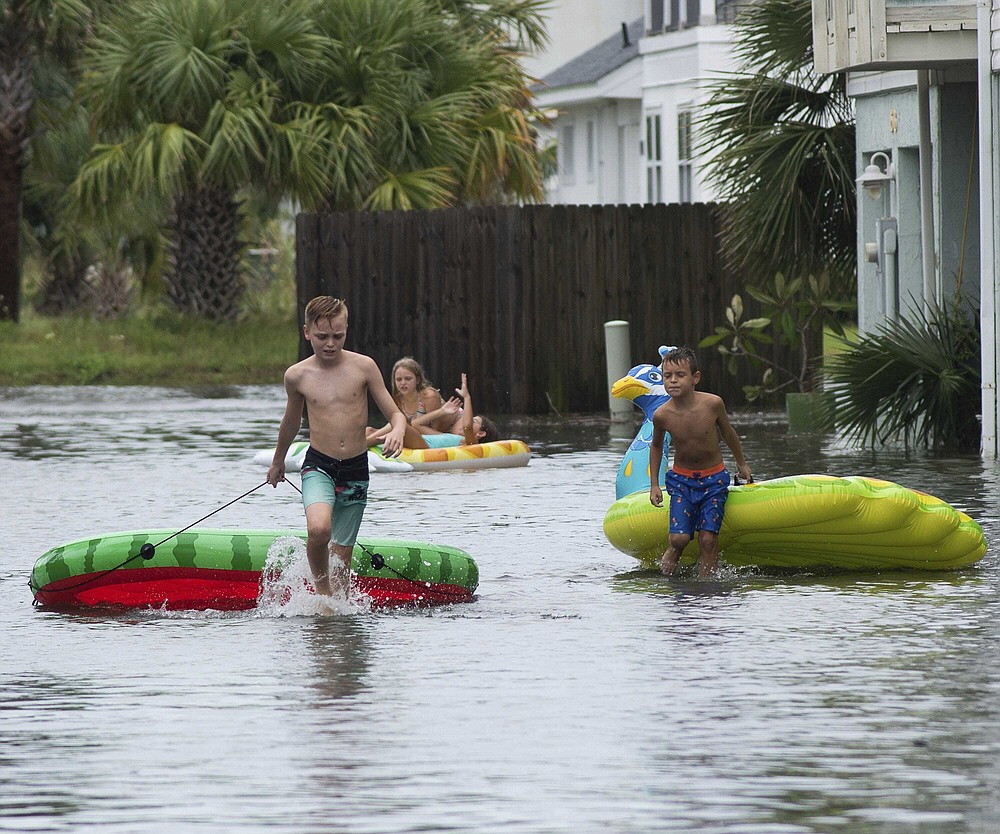 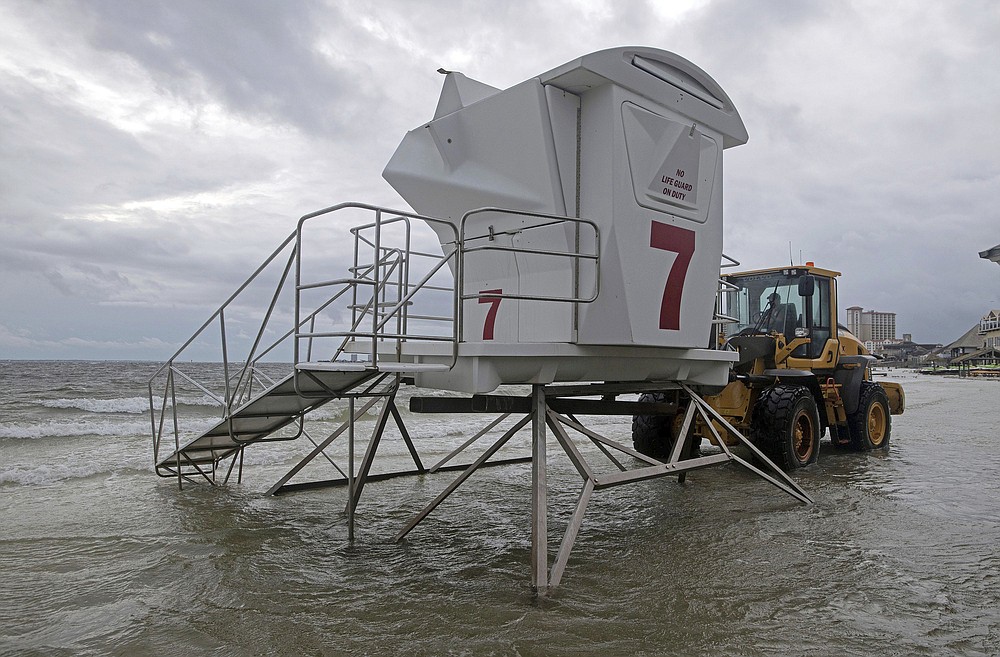 A lifeguard stand is removed from a flooded beach in Pensacola Beach, Monday, Sept. 14, 2020. Storm-weary Gulf Coast residents rushed to finish last-minute preparations Monday as Hurricane Sally chugged slowly through warm Gulf waters. Forecasters predicted the biggest threat is flooding, with as much as two feet of rain falling in some areas. (Tony Giberson/Pensacola News Journal via AP)