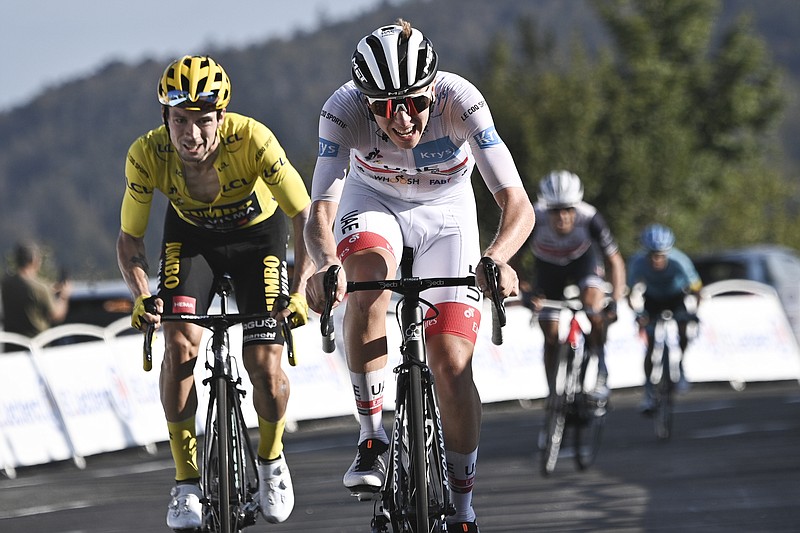 There is only one big question left to be answered at the Tour de France: Which Slovenian will stand on the top of the podium on Sunday on the Champs-Elysees?

Barring a crash, or an unexpected event event like a positive COVID-19 test, the final week of racing should offer a showdown between the Jumbo-Visma team leader Primoz Roglic and his young challenger Tadej Pogacar, who rides for the UAE Emirates team.

The two rivals from Slovenia have proved their superiority on the big climbs that punctuated the route over the past two weeks. They are only separated by 40 seconds in the general classification ahead of the race's six remaining stages, which will provide more action in high mountains and an individual time trial before the traditional procession into Paris.

"It's been a long time since I have not been at home, especially in Slovenia, but for sure it might be really crazy and nice," Roglic said.

After defending champion Egan Bernal cracked during Sunday's grueling ascent to the Grand Colombier to lose more than seven minutes in the Jura mountains, the pair's closest opponent is another Colombian, Rigoberto Uran, who is lagging 1:34 behind Roglic overall.

Ahead of today's mountain stage to the ski station of Villard-de-Lans, fourth-place Miguel Angel Lopez has a 1:45 deficit, while Adam Yates, Richie Porte and Mikel Landa trail by more than two minutes.

The time difference is not that big, but the way Roglic's team has been controlling the race so far does not bode well for Uran and the handful of riders who still hope they can turn things around.

Using an efficient and simple strategy displayed by the mighty Ineos team in previous years, Jumbo-Visma has dethroned the British outfit as the most potent squad. Their attrition technique is not tactically complicated, requiring a group of strong riders capable of setting a fast and steady tempo in ascents to break up the pack and prevent rivals from launching attacks.

That's exactly what they managed on the Grand Colombier. On the steep ascent of the mountain, Roglic's Belgian teammate, Wout van Aert, put in an impressive stint that proved fatal to Bernal and Nairo Quintana's ambitions. Tom Dumoulin, a former Tour runner-up now riding in support of Roglic, then led the reduced pack of favorites until the final 600 meters, when the race leader finally attacked.

Unlike Roglic, Pogacar has to deliver alone. His team is lacking collective strength and the 21-year-old Tour rookie has drawn praise for his aggressive and clever racing.

Pogacar beat Roglic in a sprint at the top of the Grand Colombier to claim a second stage win Sunday and reduced his overall deficit thanks to a time bonus. But his options to seize the yellow jersey are not many. He first needs to try to isolate his compatriot in the Alps, then gain more time in Saturday's race against the clock at the Planche des Belles Filles. Pogacar beat Roglic in the Slovenian time trial championships earlier this year.

"The perfect scenario would be to take it on the evening of the final time trial but we live in a real world," Pogacar said. "If there's a chance to take it I will try."

Monday was a rest day as riders underwent more coronavirus tests that could rule some out of contention if they return a positive result for COVID-19. If a competitor is confirmed positive, he will be automatically excluded while any team that registers two or more positives could be sent home today when the results will be unveiled.

Roglic said he and his teammates have already been informed they all tested negative.

"They said we all have negative tests, so I'm really happy we have one more week of racing here," he said in comments provided by Jumbo-Visma.

Jumbo-Visma later said it had not received all the test results. The race health protocol stipulates that all riders plus the staff members should be tested.