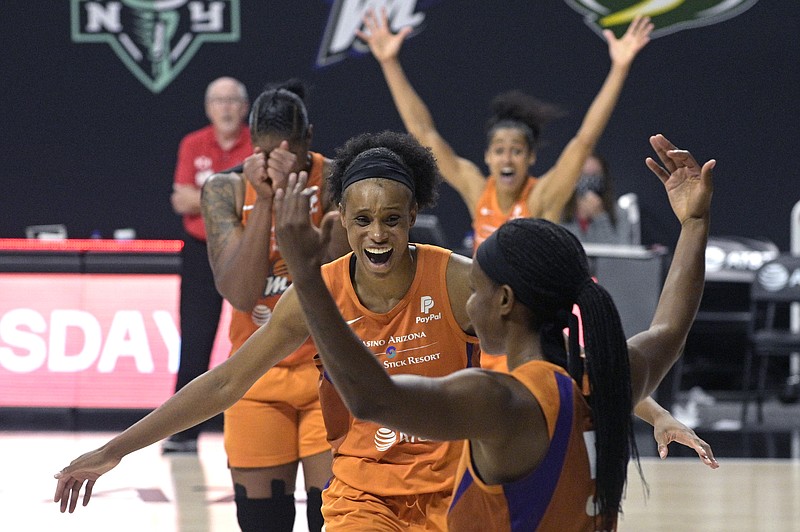 BRADENTON, Fla. -- Shey Peddy made a buzzer-beating 3-pointer to give the Phoenix Mercury an 85-84 victory over the defending champion Washington Mystics on Tuesday night in the first round of the playoffs.

Fifth-seeded Phoenix moves on to play No. 4 seed Minnesota on Thursday in the second round.

Washington guard Leilani Mitchell went 1 of 2 from the free-throw line with 5.8 seconds to go for an 84-82 lead. After a timeout, Diana Taurasi inbounded it to Skylar Diggins-Smith, who drove the lane and lofted a pass over the defense across the court to the corner. Peddy pump-faked it to get her defender in the air and calmly beat the buzzer.

Peddy, who was cut by Washington earlier this season, finished with 12 points for Phoenix. Diggins-Smith had 24 points, six rebounds and five assists and Taurasi, who improved to 7-0 in single-elimination playoff games, added 23 points. The Mercury went on a 17-0 run over a five-minute span for a 78-73 lead.

Connecticut will play either third-seeded Los Angeles or No. 4 seed Minnesota on Thursday in another single-elimination round.

Thomas beat the halftime buzzer with a hook shot in the lane to tie it at 41, and Connecticut started the second half on a 13-2 run with six points from Jasmine Thomas. Chicago was outscored 27-11 in the game-changing quarter.