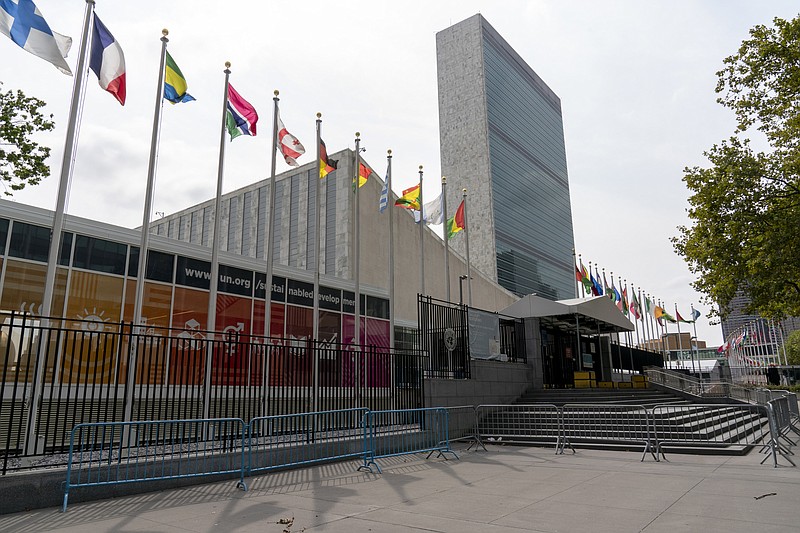 Metal barricades line the the shuttered main entrance to the United Nations headquarters, Friday, Sept. 18, 2020, in New York. With the COVID-19 pandemic still circling the globe, world leaders are skipping their annual gathering in New York and will make pre-recorded speeches this week on the state of a deeply divided world turned topsy-turvy. (AP Photo/Mary Altaffer)

UNITED NATIONS -- With COVID-19 still careening across the planet, the annual gathering of its leaders in New York will be replaced this year by a global patchwork of prerecorded speeches, another piece of upheaval in a deeply divided world turned topsy-turvy by a pandemic with no endpoint in sight.

As U.N. Secretary-General Antonio Guterres put it: "The COVID-19 pandemic is a crisis unlike any in our lifetimes, and so this year's General Assembly session will be unlike any other, too."

This is the first time in the 75-year history of the United Nations that there will be no in-person meeting. Gone will be the accompanying traffic jams, street closures for VIP motorcades, stepped-up security to protect leaders and noisy crowds in the halls of the sprawling United Nations complex overlooking New York's East River.

Only one diplomat from each of the U.N.'s 193 member nations will be allowed into the vast General Assembly hall. All will be socially distanced and masked.

Guterres said the virtual meeting will see speeches from "the largest number of heads of state and government ever" -- 171, according to the latest speakers list.

World leaders are not barred from coming to speak in person. But presidents, prime ministers, monarchs and ministers travel with large entourages and at a time of pandemic and quarantine requirements, including in New York City, the General Assembly members agreed that crowds needed to be avoided.

They recommended that leaders each deliver a 15-minute pre-recorded speech, to be shown in the assembly hall and introduced by the ambassador or a diplomat from the country.

Turkish diplomat and politician Volkan Bozkir, who took over the one-year presidency of the General Assembly on Tuesday, said 10 leaders wanted to come to the U.N. to speak including Turkish President Recep Tayyip Erdogan. He lamented that they aren't able to because of US quarantine requirements.

This leaves U.S. President Donald Trump as the one leader who could travel to New York. Even though reports say he will not be appearing in person, the metal barricades police always put in place for a presidential visit went up Friday along First Avenue outside the United Nations.

The high-level meetings begin today with a commemoration of the U.N.'s 75th anniversary, including statements from world leaders and formal adoption of a declaration approved by all 193 member nations. It recalls the U.N.'s successes and failures and calls for "greater action" to build a post-pandemic world that is more equal, works together and protects the planet.

The United Nations was born out of the horrors of World War II with a mission to save succeeding generations from the scourge of conflict. The declaration says the U.N. has helped mitigate dozens of conflicts and saved hundreds of thousands of lives through humanitarian action. But it points to a world "plagued by growing inequality, poverty, hunger, armed conflicts, terrorism, insecurity, climate change, and pandemics."

"The stakes could not be higher," Guterres told a news conference Wednesday.

He pointed to an "out-of-control" pandemic that has claimed nearly a million lives and stressed the need for a deeply divided world to unite not only to defeat the coronavirus and ensure that "a people's vaccine" is available to all people but to make a collective push for peace.

Today's anniversary commemoration will be followed by Tuesday's opening of the virtual high-level meeting, starting with Guterres' in-person speech on the state of the world in which he said he will repeat his March 23 call for a global cease-fire, this time by the end of the year.

"Today, from Afghanistan to Sudan, we see hopeful new steps toward peace," the U.N. chief said. "In Syria, Libya, Ukraine and elsewhere, cease-fires or standstills in the fighting can create space for diplomacy. In Yemen, we are pressing for a cease-fire, confidence building measures and resumption of the political process."

Guterres will be followed by addresses Tuesday from Brazil's President Jair Bolsonaro, Trump, leaders from Turkey, China, Cuba, Russia, Jordan, Iran, France and dozens of others through Sept. 26. The speeches conclude on the morning of Sept. 29 after a two-day break.

Usually, hundreds of side events take place during the gathering. This year there are only a few meetings, including ones on digital cooperation, climate action, biodiversity and accelerating the pandemic's end. Two meetings commemorate the 25th anniversary of the U.N. women's conference in Beijing and promote the International Day for the Total Elimination of Nuclear Weapons.

Guterres, the General Assembly's Bozkir and many U.N. diplomats say the key issue for world leaders today is how to build a post-pandemic world that is more peaceful and united and focuses on eradicating extreme poverty, preserving the environment and achieving gender equality by 2030.

Even before the pandemic, Guterres said, the world "was veering off course" and losing the battle against climate change. He cited the northern hemisphere's hottest summer ever, with ongoing wildfires.

"The world is burning, and recovery is our chance to get on track and tame the flames," he said.

As in recent years past, a major theme in speeches is expected to be multilateralism -- the kind of cooperation that Guterres stressed is required for recovery from COVID-19.

"Multilateralism is the panacea to all the problems in the world," Bozkir said. He warned that unilateralism will only strengthen the COVID-19 crisis, saying that "no state can combat this pandemic alone."

France's U.N. Ambassador Nicolas de Rivière said the high-level week "will be an opportunity to reflect on the current COVID-19 crisis, and to reaffirm the crucial role of the United Nations and of multilateral cooperation, which are badly needed in these times."

While the high-level meeting of world leaders often faces criticism for its constant speechmaking and lack of visible results, much of its business takes place in one-on-one meetings and at lunches, dinners and small gatherings -- and for U.N. officials and diplomats that will be the real missing ingredient this year. 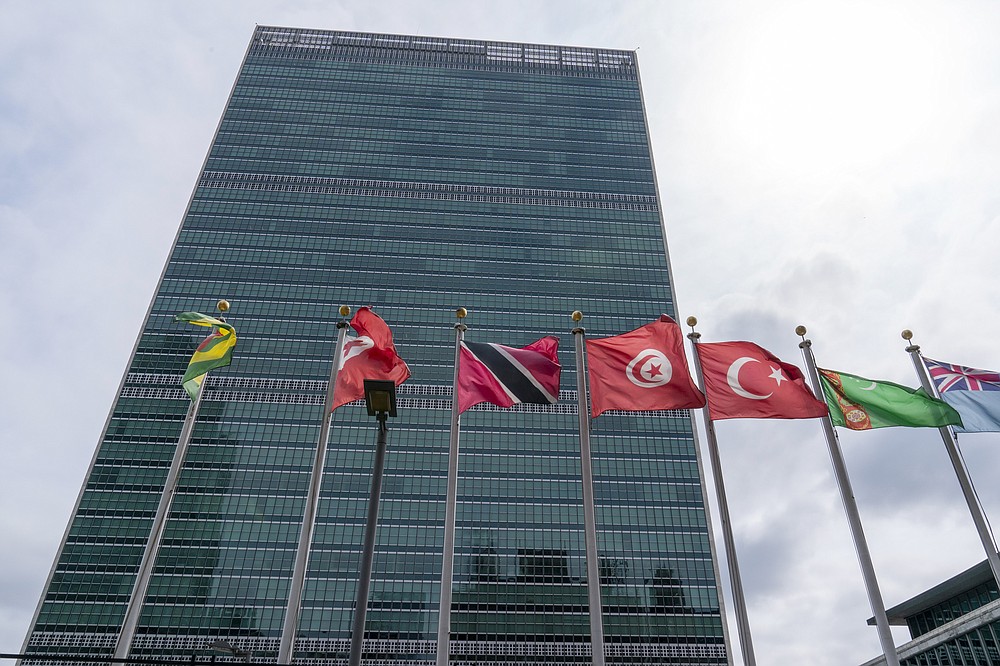 Member state flags fly outside the United Nations headquarters, Friday, Sept. 18, 2020, in New York. With the COVID-19 pandemic still circling the globe, world leaders are skipping their annual gathering in New York and will make pre-recorded speeches this week on the state of a deeply divided world turned topsy-turvy. (AP Photo/Mary Altaffer)