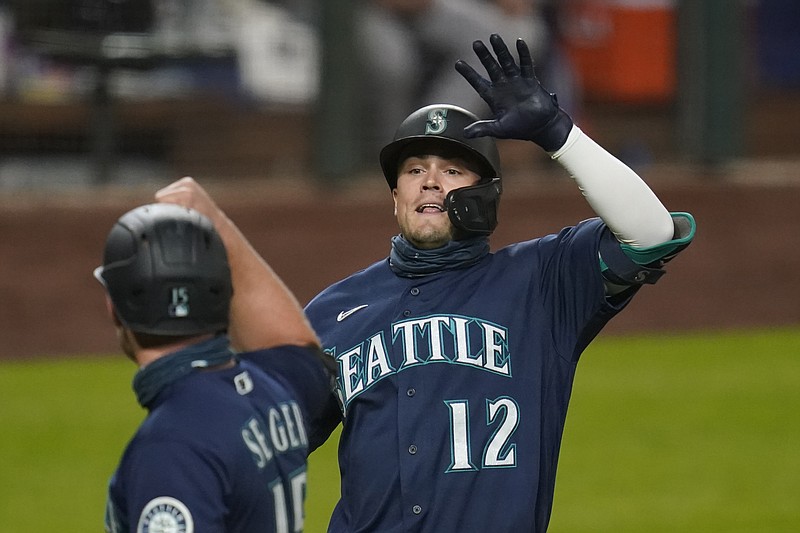 Seattle Mariners' Evan White (12) is congratulated by Kyle Seager after hitting a three-run home run against the Houston Astros in the seventh inning of Monday's game in Seattle. - Photo by Elaine Thompson of The Associated Press

Seattle's victory clinched the AL West title for Oakland, ending Houston's three-year run atop the division. The win also improved Seattle's slim hopes of catching the Astros for second place in the division and a guaranteed playoff spot. The Mariners are three games behind Houston with six remaining.

It was just the third win for Seattle in its past 27 meetings with Houston over the last two seasons.

Houston starter Lance McCullers Jr. (3-3) didn't allow a hit until Tim Lopes' one-out double in the sixth -- but things quickly unraveled. Ty France had an RBI double and McCullers' night ended when White turned on a hanging 2-2 curveball and lined it over the left-field wall for his seventh home run and a 4-0 lead.

Seattle added two more off reliever Brandon Bielak in the eighth on Kyle Seager's deep fly into the left-field corner that Michael Brantley couldn't track down.

Gonzales (7-2) pitched out of trouble. He stranded runners at second in the second, fourth and sixth innings. He allowed seven hits and struck out six. He's won five straight decisions.

McCullers allowed three hits and struck out seven, but none of the four runs were earned.

KANSAS CITY, Mo. -- Maikel Franco hit the go-ahead single with two outs in the sixth inning and the Kansas City bullpen shut down St. Louis from the fourth inning on.

Alex Gordon and Jorge Soler also drove in runs for the Royals, who returned for their final homestand after getting swept in Milwaukee.

Carlos Hernandez allowed one run over 3 2/3 innings before giving way to Jake Newberry, Scott Barlow, Josh Staumont (2-1) and Jesse Hahn, who combined to allow one hit -- a two-out single by Paul Goldschmidt -- without a walk over the next 4 1/3 innings. Greg Holland worked around a leadoff single in the ninth for his sixth save.

Franco's two-run single down the right-field line off Adam Wainwright (5-2) was enough to spoil an otherwise solid night by the longtime Cardinals starter. He wound up allowing three runs on six hits and two walks over 5 2/3 innings.

The Indians cut their magic number to one.

After the White Sox scored four times in the fifth inning against Aaron Civale (4-5), Santana came to the plate in the bottom half. With Ramirez on first after a one-out walk, Santana pulled a 2-1 sinker from Jace Fry (0-1) over the left-field wall and into the empty bleachers to make it 6-4.

Nick Wittgren struck out the side in the seventh and James Karinchak worked the eighth before Brad Hand pitched the ninth for his 14th save in 14 tries.

Eloy Jiménez hit his 14th homer of the season for the White Sox..

The Reds (28-27) won for the eighth time in nine games. The Brewers (26-27) had their season-high four-game winning streak snapped.

Suárez connected in the sixth inning off Brandon Woodruff (2-5), who had repeatedly escaped threats.

The Reds pulled away in the eighth against Drew Rasmussen. Curt Casali led off with a homer and Mike Moustakas added a three-run shot.

Jedd Gyorko homered off one of Castillo's few mistakes.

Lester (3-2) struck out one and walked one in his first victory since Aug. 11. He retired the first nine batters he faced and kept the lowest-scoring team in the majors in check. Only two of Pittsburgh's four hits left the infield.

Kyle Schwarber doubled twice and drove in a pair of insurance runs in the eighth. Javy Báez drove in a run with a surprise bunt and Victor Caratini added an RBI double.

The Rays trimmed their magic number to one for their first division title since 2010.

DeGrom (4-2) pitched seven innings of two-run ball, striking out 14 to match his career high for the second time this season. He allowed four hits and walked two.

Peter Fairbanks began with 1 2/3 scoreless innings, Josh Fleming (4-0) allowed a run in three innings as the bulk man and Nick Anderson closed for his sixth save.

WASHINGTON -- Bryce Harper was hitless in his return from back stiffness and Philadelpia manager Joe Girardi was ejected in the third inning of a loss to Washington.

Harper went 0 for 4 with three strikeouts as the designated hitter, dropping his average to .254.

Third-place Philadelphia fell to 27-27 and with six games left. Girardi and center fielder Roman Quinn were ejected in the third inning for arguing a call by plate umpire Junior Valentine.

Aníbal Sánchez (3-5) allowed one run and four hits in five innings and combined with four relievers on a six-hitter.

ATLANTA -- Austin Riley's two-run double capped a wild first inning and the deep Atlanta bullpen took it from there, allowing just one run over the final six innings to push the Braves a step closer to a third straight NL East title .

Tyler Matzek (4-3) pitched two hitless innings for the win, and Darren O'Day and Chris Martin each worked a scoreless frame. Will Smith escaped a bases-loaded jam in the eighth, and Mark Melancon claimed his 11th save.

The Braves could clinch the division title as soon as Tuesday.

BUFFALO, N.Y. -- Rookie Alejandro Kirk became the first catcher 21 or younger since Johnny Bench with at least four hits that included two for extra bases, and Toronto beat the Yankees.

Kirk, who played at Class A last season and made his debut Sept. 12, singled in the third off Michael King, doubled in the fourth against Jonathan Loaisiga, singled in the fifth off Nick Nelson and hit an opposite-field homer to right in seventh off Chad Green for his first four-hit game. Bench accomplished the feat as part of a five-hit game at Philadelphia on Aug. 3, 1969, according to STATS.

Randal Grichuk hit is first homer since Aug. 28 and drove in two runs for the Blue Jays.

Vladimir Guerrero Jr. had three hits and three RBIs while Teoscar Hernandez and Bo Bichette each drove in a pair as the Blue Jays (28-26) won their second straight.

In the opener of an eight-game road trip to end the season, the Rockies knocked around Johnny Cueto for seven earned runs in 4 1/3 innings.

The Giants (26-27) trail the Philadelphia Phillies by a half-game for the final playoff spot in the National League. The Rockies (24-29) are 2 1/2 games back.

Colorado scored two runs in the first on RBI singles by Josh Fuentes and Ryan McMahon. Pillar's sixth homer of the season made it 3-0 in the third, and the Rockies added another run in the fourth on a balk. They kept piling on in the fifth with a two-run single by Elias Diaz and an RBI single from Garrett Hampson. The seven runs allowed by Cueto (2-2) were a season high.

Márquez (3-6) limited the Giants to one run and five hits, striking out three.