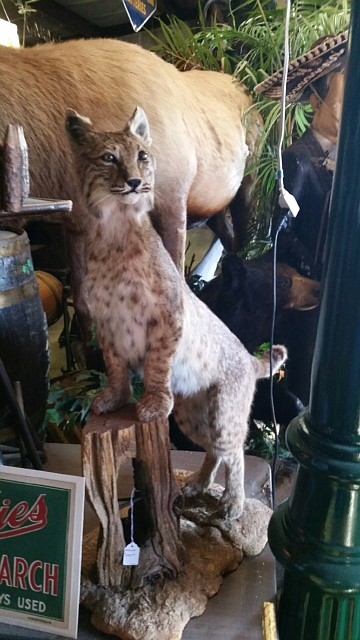 A bobcat is one of the numerous taxidermy items included in the market for macabre antiques. - Submitted photo

Special to The Sentinel-Record

Yes, there is a market for macabre antiques. From taxidermy chicken foot earrings to human mummified feet to a gas chamber chair, there is a demand.

They include the wolf head iron mask, which was used for a social punishment in the Middle Ages. It represents the bizarre form of punishment and is known as a "shame mask" because of the muzzle-like device. Usually, the shape of the metal masks symbolized the nature of one's crime. Ugly faces with long tongues represented gossip and pig snouts indicated poor hygiene. Most "shame masks" from that time were used to discipline women but the shape of a wolf head often was used to punish men of vulgar behavior or used abusive language. It served as a tool of public shame and humiliation to punish nonviolent offenders.

Some of the most sought-after and pricey items are antiquities such as a vampire slaying kits, death masks, skull crushers, etc. Torture devices were apparently all the rage back in the day. It seems that the more bizarre the pricier the item.

Locally, at Shaw's Antiques, one can view the Missouri State Prison's gas chamber chair. If only it could speak! I personally would not want to hear what it had to say. At this location, there is a replica French guillotine and numerous taxidermy items to include a bobcat and rhinoceros.