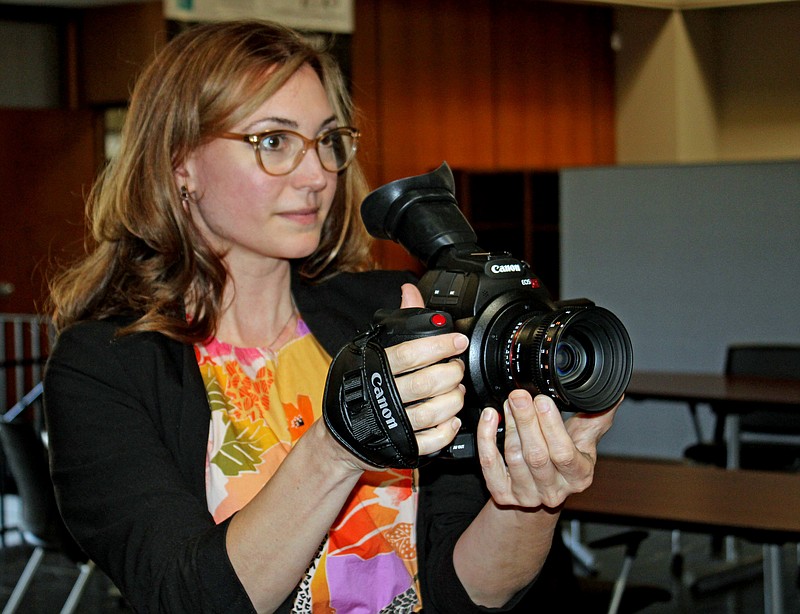 Jen Gerber, instructor for Low Key Art’s Inception to Projection program and executive director of the Hot Springs Documentary Film Festival, shows off the Canon C100 that Inception students will learn how to make films on in class. - Photo by Tanner Newton of The Sentinel-Record

This summer, Low Key Arts' Inception to Projection students will get the opportunity to show off their funny side with a course in sketch comedy.

The class is one of two Inception to Projection courses being offered this year; the other will be a Documentary Boot Camp.

The sketch comedy course will be taught by local author David Hill and filmmaker Jen Gerber. Gerber, who is also executive director of the Hot Springs Documentary Film Festival, will also teach the Boot Camp.

Hill and Gerber have taught a sketch comedy class before, in 2017. One reason they are bringing it back, she said, is that it was "really popular the first time we did it, and we have a lot of students who take the program multiple times."

"This group that's been with us a couple of years now haven't had that class, so I wanted to bring it back so they have a chance," Gerber said.

Hill, she said, takes a different approach to his classes. "With Dave Hill teaching it, it's a different type of writing. He treats the comedy writing kind of like writing for a TV show in a writers' room. It's very collaborative," Gerber said.

Gerber said that Hill teaches the writing and she teaches the directing, producing and editing in the class. "He helps develop the concepts and I help get them made," she said.

"We love him, he's a good friend of ours (and is) a great supporter of Low Key Arts," Kay said.

Kay said that they do not yet know where the June screening will be. "It remains to be seen," he said, noting that if possible they are aiming to screen them at one of the local theaters. "Drive-in is a great backup," he added.

Gerber said that adding these two types of movies to the Inception to Projection program was done "just to give everyone new opportunities. There's so many ways to tell a good story and as our filmmakers are learning these skills, I want them to have a wide range of skill sets."

"So documentary takes a different type of style and skill set of filmmaking compared to writing a script and directing actors," Gerber said.

The courses are open to first-time filmmakers as well as experienced ones, and "all the equipment and resources are available to the class," she said. "You don't need any experience or equipment to join."

Gerber said that both courses are already almost booked up, but she also encouraged anyone interested in them to still sign up. "The comedy is almost full, the documentary is full, but ... we're still figuring out how everyone will participate. If I can open up another section, I will. If someone's interested, they should still sign up."