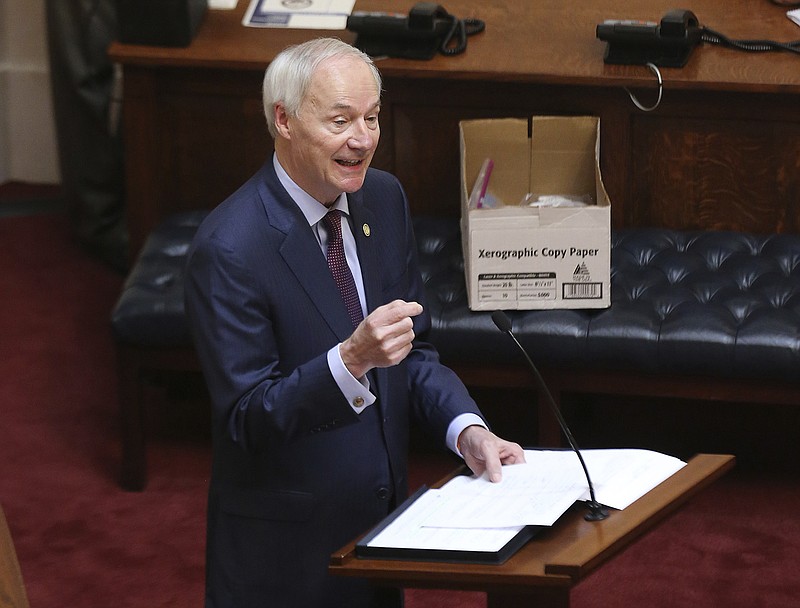 Tommy Metthe/Arkansas Democrat-Gazette via AP Arkansas Gov. Asa Hutchinson gives the State of the State in the Senate chamber of the state Capitol in Little Rock on April 8, 2020.

LITTLE ROCK -- Arkansas Gov. Asa Hutchinson on Monday vetoed legislation that would have made his state the first to ban gender confirming treatments or surgery for transgender youth, though lawmakers could enact the restriction over his objections.

The Republican governor rejected legislation that would have prohibited doctors from providing gender confirming hormone treatment, puberty blockers or surgery to anyone under 18 years old, or from referring them to other providers for the treatment.

"If (the bill) becomes law, then we are creating new standards of legislative interference with physicians and parents as they deal with some of the most complex and sensitive matters involving young people," Hutchinson said at a news conference.

The Republican Legislature could still enact the measure, since it only takes a simple majority of the House and Senate to override a governor's veto in Arkansas. Hutchinson said he believed an override was likely.

Hutchinson's veto follows pleas from pediatricians, social workers and the parents of transgender youth who said the measure would harm a community already at risk for depression and suicide. Hutchinson said he met with doctors and transgender people as he considered whether to sign the measure.

He said he would have signed if it had just focused on gender confirming surgery, which currently isn't performed on minors in the state. He noted it wouldn't have exempted youth who are already undergoing treatment.

Sponsors of the measure did not say when they planned to seek an override or whether they had enough votes secured to enact the measure despite Hutchinson's objection.

Hutchinson said he hopes lawmakers would come up with a "more restrained approach." Conservative groups urged the legislature to enact the ban.

"The Arkansas Legislature needs to step up and override the governor's veto to make sure this good bill becomes law," Family Council President Jerry Cox said.

Arkansas is one of a handful of states where it only takes a simple legislative majority to override a governor's veto. The only veto override attempt this year -- over a bill Hutchinson rejected that would have required the state to refund fines levied on businesses for violating coronavirus safety rules -- failed last month.

The treatment ban was the latest measure targeting transgender people that easily advanced in the Arkansas Legislature and other states this year. Arkansas, Mississippi and Tennessee's governors have signed laws banning transgender girls and women from competing on school sports teams consistent with the gender identity.

In South Dakota, a transgender sports bill died after Republican Gov. Kristi Noem issued a partial veto. She issued an executive order immediately after the bill died that pushed public schools to issue bans, but critics say the order is merely a recommendation intended to salvage her reputation with social conservatives. Noem has promised to call a special legislative session to have lawmakers take up the issue again.

Hutchinson recently signed a measure allowing doctors to refuse to treat someone because of moral or religious objections, a law that opponents have said could be used to turn away LGBTQ patients.

The head of the nation's largest LGBTQ rights group said Hutchinson's veto should be a "warning" to other states considering similar bans. Similar treatment bans have proposed in at least 20 states.

"The repercussions were too much for Arkansas, and they will be just as severe for any state weighing this type of legislation," Human Rights Campaign President Alphonso David said in a statement.

It isn't the first time Hutchinson has pushed back on measures targeting the LGBTQ community.

In 2017, he opposed legislation that would have prohibited transgender people from using government bathrooms consistent with their gender identity. That bathroom bill, which was opposed by tourism groups, never advanced beyond a Senate committee.

Hutchinson in 2015 urged lawmakers to rework a religious objections measure criticized by some of state's largest employers as anti-gay. The governor ultimately signed a version of the measure that was revised to address those concerns. 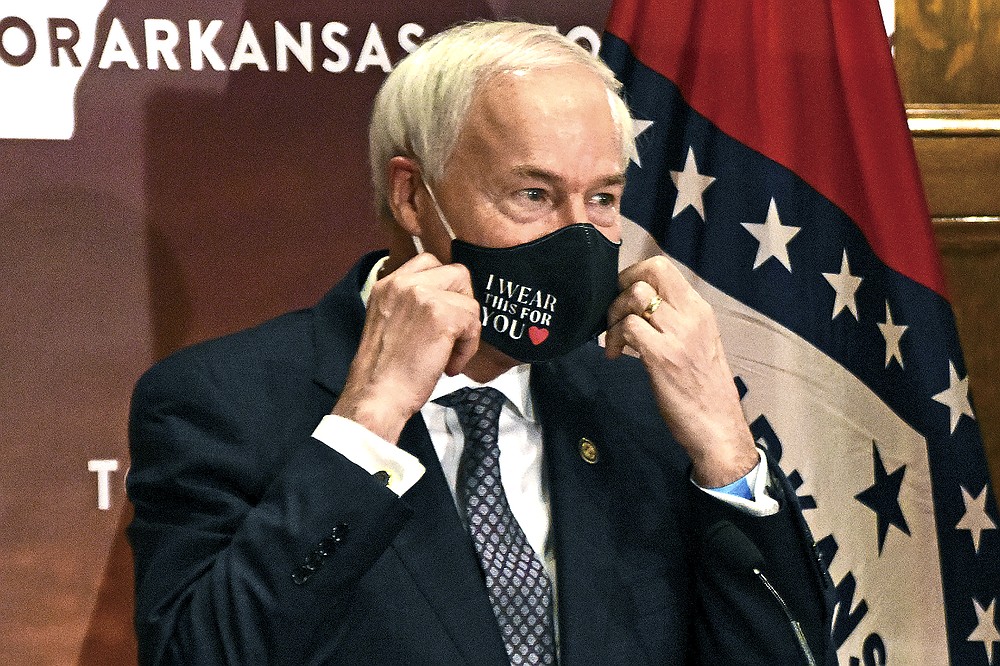 FILE - In this July 20, 2020 file photo, Arkansas Gov. Asa Hutchinson removes his mask before a briefing at the state capitol in Little Rock. Gov. Hutchinson on Monday, April 5, 2021 vetoed legislation that would have made his state the first to ban gender confirming treatments or surgery for transgender youth. (Staci Vandagriff/The Arkansas Democrat-Gazette via AP, File)
ADVERTISEMENT