Capitol police officer to lie in honor at rotunda April 13 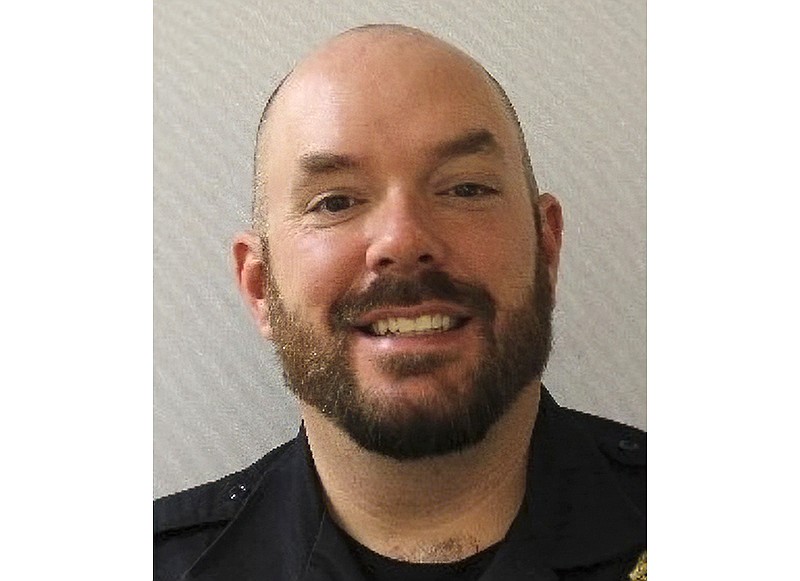 WASHINGTON -- The 18-year U.S. Capitol Police veteran killed in the line of duty is being remembered as a man with a sense of humor who loved baseball and golf and was most proud of one particular title: Dad.

William "Billy" Evans, 41, was killed Friday when a vehicle rammed into Evans and another officer at a barricade just 100 yards from the Capitol. The driver, Noah Green, 25, came out of the car with a knife and was shot to death by police, officials said. Investigators believe Green had been delusional and increasingly having suicidal thoughts.

The U.S. Capitol Police also released a statement from Evans family, saying: "His death has left a gaping void in our lives that will never be filled."

Evans, a father of two, grew up in North Adams, Massachusetts, a close-knit town of about 13,000 in the northwest part of the state.

Jason LaForest knew Evans for more than 30 years. He was a close friend of Evans' older sister, Julie, and recalled Evans as a prankster who made sure the subjects of his jokes laughed as well.

"As a young kid, Billy, of course, was the annoying little brother of one of my best friends, a title which he held on to for most of his life," said LaForest, a North Adams city councilman. "But it was a joy to watch him grow up and become a talented athlete and a dedicated police officer, and, of course, the role in life that he loved the most, which was a dad."

Sports, particularly baseball, was another important part of Evans' life.

"He came from a long line of family members that loved baseball and especially the Boston Red Sox," LaForest said. "He excelled in baseball and enjoyed playing baseball most of his life. It's a passion that he instilled in his children."

He attended Western New England University, graduating in 2002 as a criminal justice major. He joined the Capitol Police the next year.

Robert E. Johnson, the university's president, said in a statement that Evans was a member of the school's baseball and bowling teams and the campus activities board. He said that Evans' friends at the university described him as "extremely welcoming and friendly, humble, and always willing to help others."

John Claffey, a professor of criminal justice, said that when news of Evans' death first aired, he had the sense that he knew that smile. "I immediately said that's a face I recognize," Claffey said.

He recalled Evans as a student who knew what he wanted to do -- a "very focused kid."

Over the weekend, Claffey received four calls from former students who just wanted to talk to him about Evans.

"This has shaken a lot of people's worlds," he said. "A lot of people from Western New England, who haven't been here in 18 years, it's still having an impact on them."

Members of Evans family said in the statement through the U.S. Capitol Police that the most important thing in Evans' life was his two children, Logan and Abigail.

"His most cherished moments were those spent with them -- building with Lego, having lightsaber duels, playing board games, doing arts and crafts, and recently finishing the Harry Potter series," the family said.

"He was always so eager to show how proud he was of everything they did. Any opportunity to spend time with his children brightened both their lives and his. Their dad was their hero long before the tragic events of last week."

The family said Evans was proud of his job and that his friendship with colleagues near the "North Barricade" of the Capitol complex was one of the best parts of his job.

"We hold them in our hearts, as we know they acutely share our grief," the family's statement read.

The death of Evans came nearly three months after the Jan. 6 rioting at the Capitol that left five people dead, including Capitol Police Officer Brian Sicknick. He died a day after the insurrection.

Lawmakers issued a wave of statements offering their condolences and gratitude to Evans after the Good Friday attack. Capitol Hill aides and members of the press corps that cover Capitol Hill also weighed in, recalling him as friendly and professional.

In a joint statement released Tuesday, Schumer and Pelosi said they hoped next week's tribute in the Capitol Rotunda would provide comfort to Evans' family and express the nation's gratitude to members of the U.S. Capitol Police.

"In giving his life to protect our Capitol and our Country, Officer Evans became a martyr for our democracy. On behalf of the entire Congress, we are profoundly grateful," Schumer and Pelosi said.

LaForest said Evans never considered himself to be a hero.

"He wanted to serve his country as a Capitol police officer and looked forward to seeing lawmakers and visitors who came to the Capitol every day, many of whom became friends of Billy's in large part because of his good-natured sense of humor," LaForest said. "And, unfortunately, Billy paid the ultimate price defending his country." 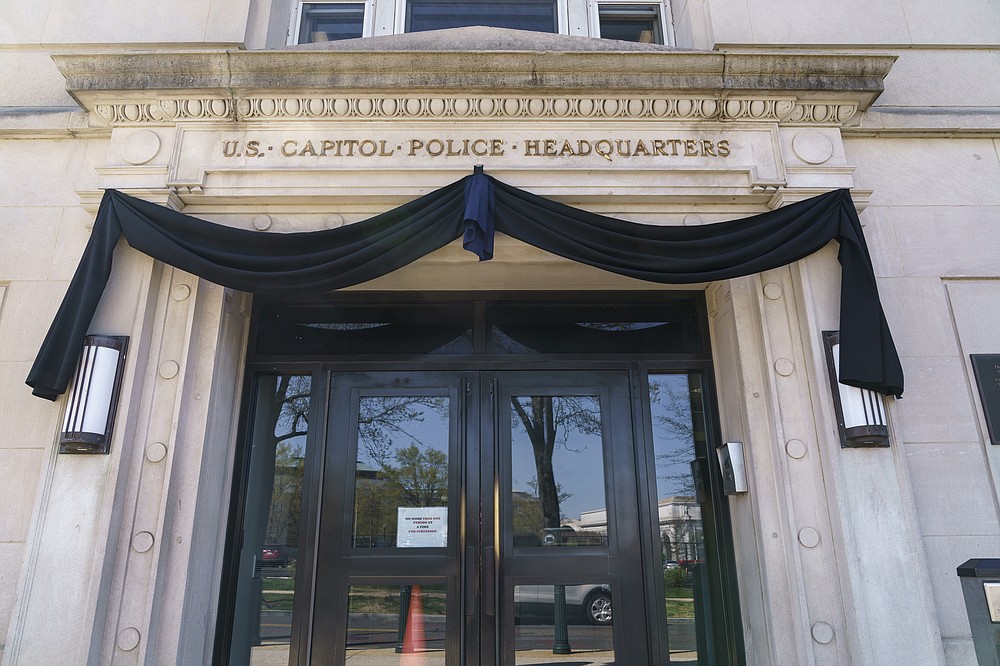 The U.S. Capitol Police Headquarters entrance in Washington, is draped in black Monday, April 5, 2021, after one officer was killed and another injured when a driver slammed into them at a barricade Friday afternoon. Security concerns over the events of the past four months may alter not only how the U.S. Capitol Police operate, but also whether the historically public grounds can remain open. (AP Photo/J. Scott Applewhite) 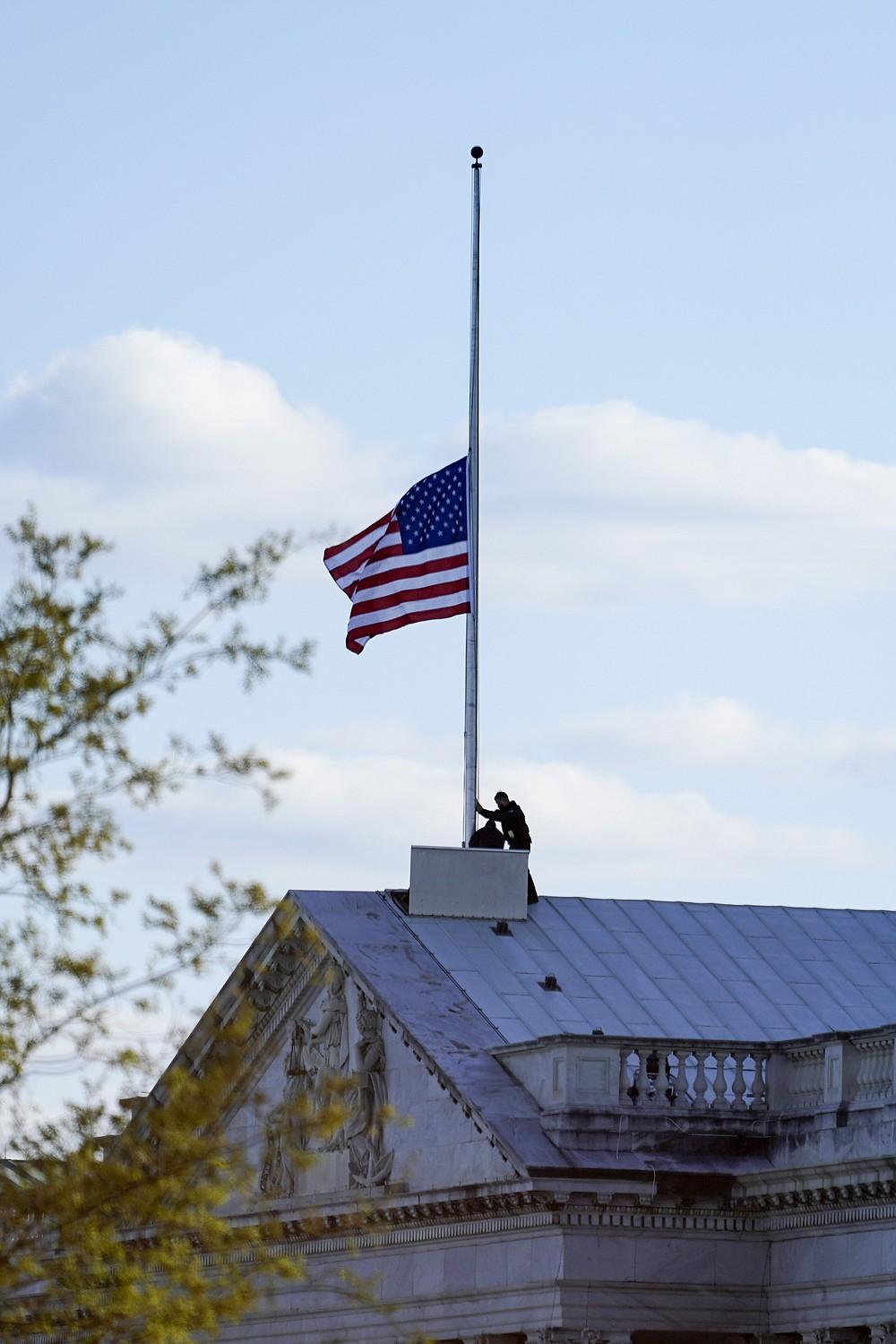 The American flag at the U.S. Capitol is lowered to half-staff in honor of Capitol Police officer William Evans who was killed after a man rammed a car into two officers at a barricade outside the U.S. Capitol in Washington, Friday, April 2, 2021. (AP Photo/Alex Brandon) 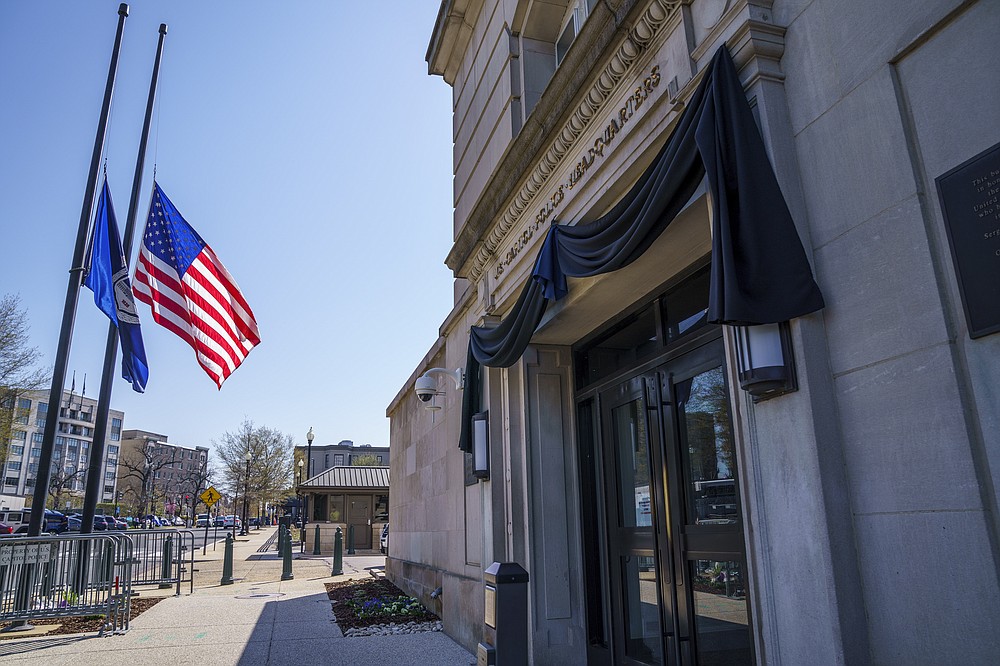 The U.S. Capitol Police Headquarters entrance in Washington, is draped in black Monday, April 5, 2021, after one officer was killed and another injured after a driver slammed into them at a barricade Friday afternoon. Security concerns over the events of the past four months may alter not only how the U.S. Capitol Police operate, but also whether the historically public grounds can remain open. (AP Photo/J. Scott Applewhite) 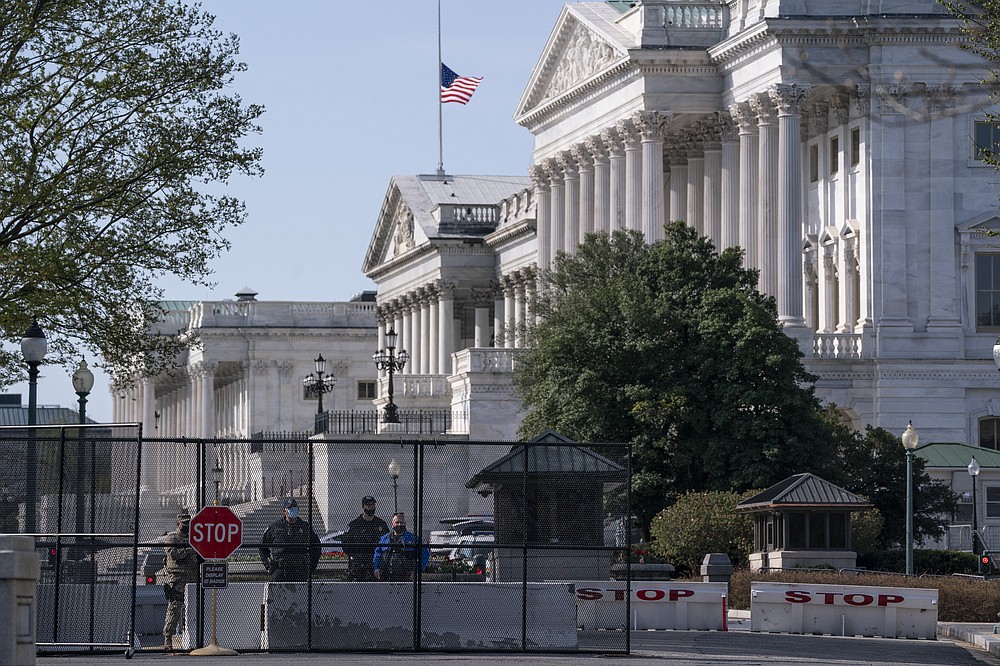 U.S. Capitol Police officers and members of the National Guard keep watch at the Constitution Avenue entrance to the East Plaza of the Capitol where an officer was killed Friday as a man rammed a car into the barricade, in Washington, Monday, April 5, 2021. Security concerns over the events of the past four months may alter not only how the U.S. Capitol Police operate, but also whether the historically public grounds can remain open. (AP Photo/J. Scott Applewhite) 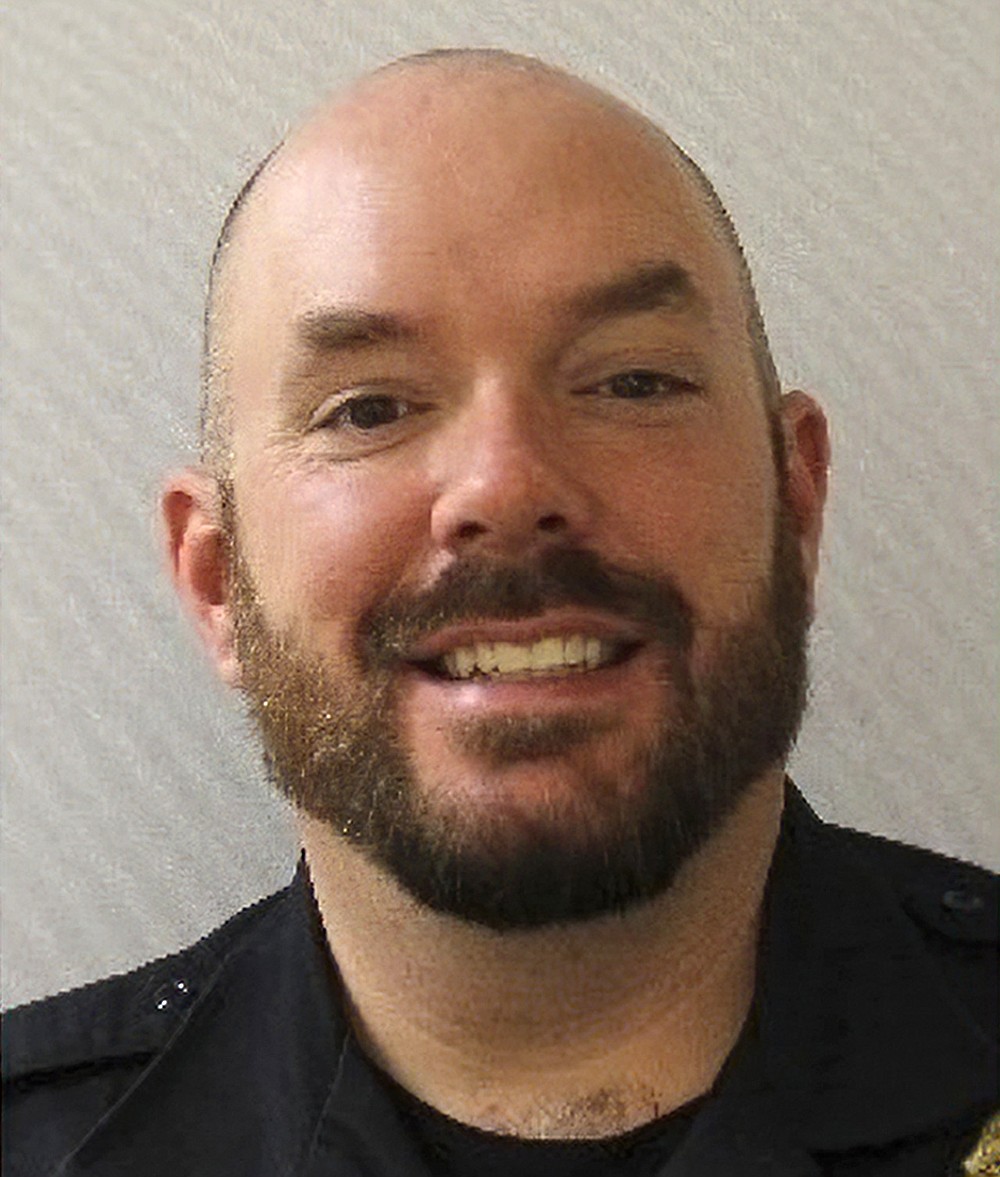